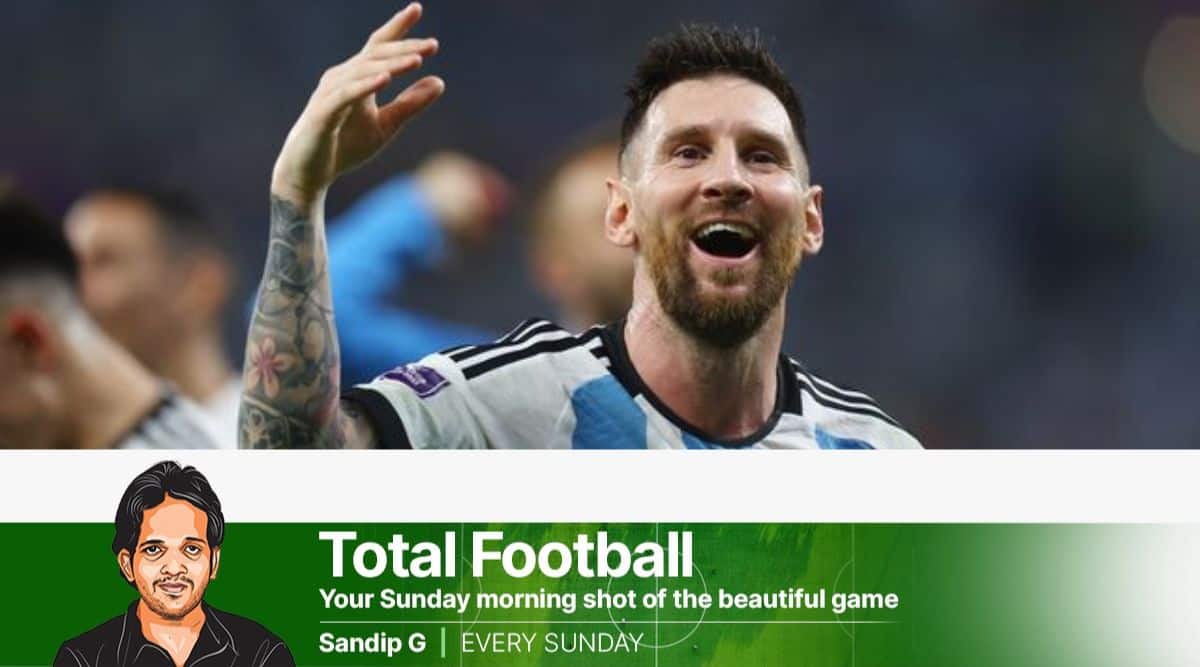 That first touch of Lionel Messi. That left-foot swing that pierced through the fumbling legs of Harry Souttar. That laser-eyed precision to beat the outstretched fists of Mathew Ryan. That twinkling run when he became younger by a decade. That Christ the Redeemed pose when he looks skywards to thank his grandmother every time he scores a goal.

Everything that Messi did on an electrifying Saturday night, would not need high definition camera shots to be stored in the mind of his admirers. The kind of goal he scored against Australia, he has scored a hundred times in his career. Ball cushioned onto his left from the right side of the box. Messi takes a gorgeous first touch, it’s almost always gorgeous. Then he lashes a shot to the bottom corner of the far post. How many times have we seen this! How many we would see this again! But repetitiveness does not make him humdrum; it only enhances his charm and genius, each replay revealing a hidden, unnoticed aspect of his.

There have been better goals in this tournament of great goals; there have been better assists and first touches, quicker runs and passes, but none of these would be remembered as vividly as those of Argentina’s No 10. Such is his aura that any Argentina game has just one protagonist. Messi. Any Argentina game has one narrative arc. Messi. Perhaps, this World Cup itself has one theme. Messi. This World Cup is a bundle of interconnected Messi events, of Messi steps and Messo goals.

The dominant storyline of the tournament has been the upsurge of the mid-rung teams. Messi was part of that too. It all started with Saudi Arabia upsetting Messi’s Argentina.

Whenever he has taken the field in Qatar, the stadium turns into a sea of Messi jerseys. Most of the Saudi Arabians came wearing his jersey to watch the greatest win in their football history. Many of them cried for Messi when he walked forlornly down the tunnel. Messi’s tears were theirs too; his joy was theirs too. No footballer could perhaps dictate the mood of a game as Messi could, as if he has a secret access to their emotional intelligence.

It forces several questions. Has any footballer, or any athlete, bestowed with so much unalloyed love? Has the world prayed unitedly for any player to win a World Cup? Has so much tears been shed on a single player? Has any other player brought so much joy?

There are other great players in the World Cup. Cristiano Ronaldo for instance; Neymar and Kylian Mbappe too. All with aura and fanfare, but does anyone emote a spectator as much as Messi does?

Of course, he is a product of the times, when television is mainstream, when you could stream games on your smartphone, when you watch from leagues anywhere in the world and consume more global football than ever before. The masses never had such access to Pele and Maradona, or Cruyff or Garrincha. Football was less a global sport, the reach limited. But it is no fault of Messi’s. There is something larger at play, something that goes beyond the usual player-fan connect.

Perhaps that would be his biggest legacy when he decides to call time on his career. More than the goals, more than the trophies, more than the World Cup. He made us fall in love with him. It does not alter when alterations find; it unifies a world drifting in a whirlpool of differences. Like FIFA’s football united world, it could be said that Messi unites the world. He is a universal language that connects people, bond over, and make friends of a lifetime.