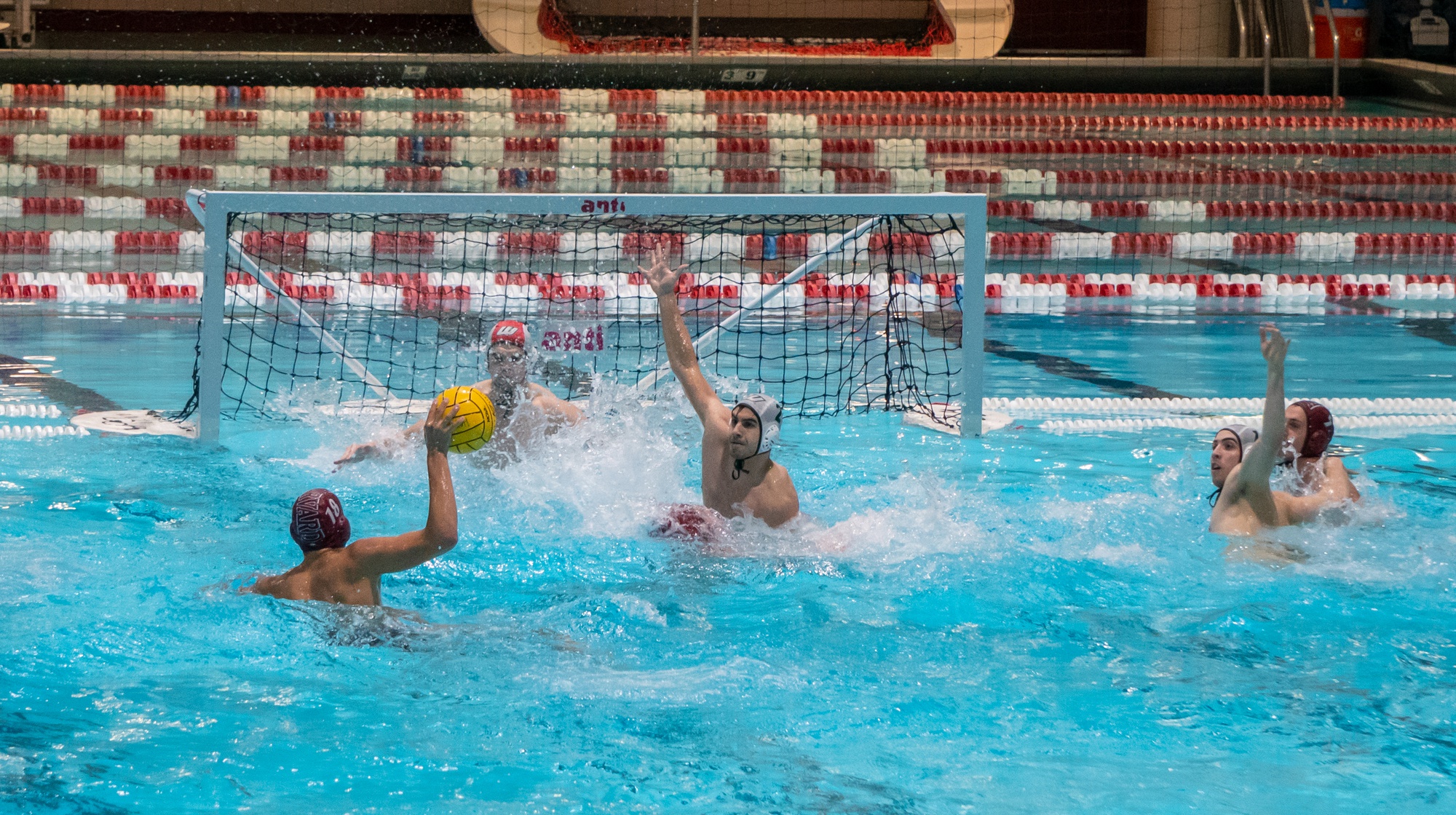 The Harvard men’s water polo team split its four games at the Aggie Round Up in California, easily handling Occidental College and winning an overtime thriller against No. 13 University of California Irvine to elevate the Crimson’s ranking to No. 12 in the country.

The contest against UC Irvine (6-6, 0-0), which was the final match of the round-robin tournament, saw Harvard (5-3, 0-0) battle back from a three-goal deficit heading into the final period to force overtime. First-year utility man James Rozolis-Hill punctuated his five-goal performance with the winner in the extra period, propelling the Crimson to an 18-17 victory. Junior attacker Alexandru Bucurchipped in four goals for his first multi-goal showing of the year.

Senior attacker and captain Alex Tsotadze hopes that the victory will provide confidence to the team whenever it faces adversity later in the season.

“It gives us hope down the line, if we’re ever in a situation where we’re trailing going into the fourth quarter,” Tsotadze said. “We can always rally behind those early season victories that we had where we were able to come from behind and play as a unit. It gives us that confidence and state of mind that since we’ve been in this position earlier in the season, we know what it takes.”

Against Occidental (2-8, 0-0), Harvard dominated play early on and led 10-4 heading into halftime. The Crimson put the contest out of reach in the third quarter of the eventual 19-9 win, tacking on seven goals in the period, including five unanswered. Junior center Kaleb Archer, who starred with four goals, led the third-quarter explosion, which also featured goals from Rozolis-Hill, senior defender Gabe Putnam, and junior attacker Owen Hale.

In addition to its victories, Harvard nearly upset No. 2 UCLA and No. 5 University of Pacific on consecutive days.

The contest against UCLA (13-1, 0-0) was a back-and-forth affair, containing 11 lead changes. Harvard started strong and led 10-7 at the break, but the third quarter saw a reversal of fortunes, as UCLA outscored Harvard 6-2 in the period. Ultimately, the Crimson lost by a single goal, 16-15. Rozolis-Hill led the scoring with five goals, while senior goalie Noah Hodges played great defense with nine saves.

In the game against the University of Pacific (13-2, 0-0), Harvard fell behind early, 3-2 and could never grab the lead. Losing the third quarter 4-2 put the Crimson in a hole heading into the fourth. The deficit proved too difficult to overcome and Harvard fell 15-11.

Despite the defeats, the team took away key lessons from its battles against highly-ranked teams that will serve it well as the season progresses.

“It was a great opportunity for us to test our schemes and our strategies against the best teams in the country,” Tsotadze said. “We can take away bits and pieces of tactical things that they do really well and that we can implement within our program to be more successful moving down the line.”

Looking ahead, the Crimson travel to New Jersey and New York this weekend to face Iona, St. Francis College Brooklyn, and Princeton in the start of Northeast Water Polo Conference (NWPC) play. The slate represents a chance for Harvard to make a statement to the rest of the conference early on.

“This weekend will be a great opportunity for us to solidify ourselves as the number one team in the conference by winning on the road and setting ourselves up to defend our home court advantage when we play later in the season,” Tsotadze said.

The weekend’s matchups contain both a long-standing rivalry and a chance at revenge.

Saint Francis knocked the Crimson out of the conference semifinals season, a loss that the team’s captain hasn’t forgotten.

“It’s going to be a great opportunity for us to get rid of that bad taste we have in our mouths from last year and also play in a really high energy environment at St. Francis,” he said.

Tsotadze expects the trip to Brooklyn, like the games in California, will provide valuable lessons for the less experienced members on the team.

“They always get a really great crowd out, so it’s a good experience for the younger guys to really get a game under their belts where there’s going to be a hostile crowd,” he explained.

The team likely won’t have to worry much about the performance of one first-year of the team. Rozolis-Hill continued his dominant start to the season during the trip to California, scoring 16 goals throughout the weekend. He had a hat-trick in each game – a feat he has achieved in seven of the first eight games – and raised his goal total to 31 on the season. Although it is early in the season, his current goals-per-game average of 3.88 would be a program record.

“It’s been awesome to see James step into a really big role early on,” Tsotadze said. “He’s just so dynamic on the offensive end and he can play any position in the pool. He’s always able to create space to get open and make himself available for the ball. James has really solidified himself as one of the best players on the East Coast already.”