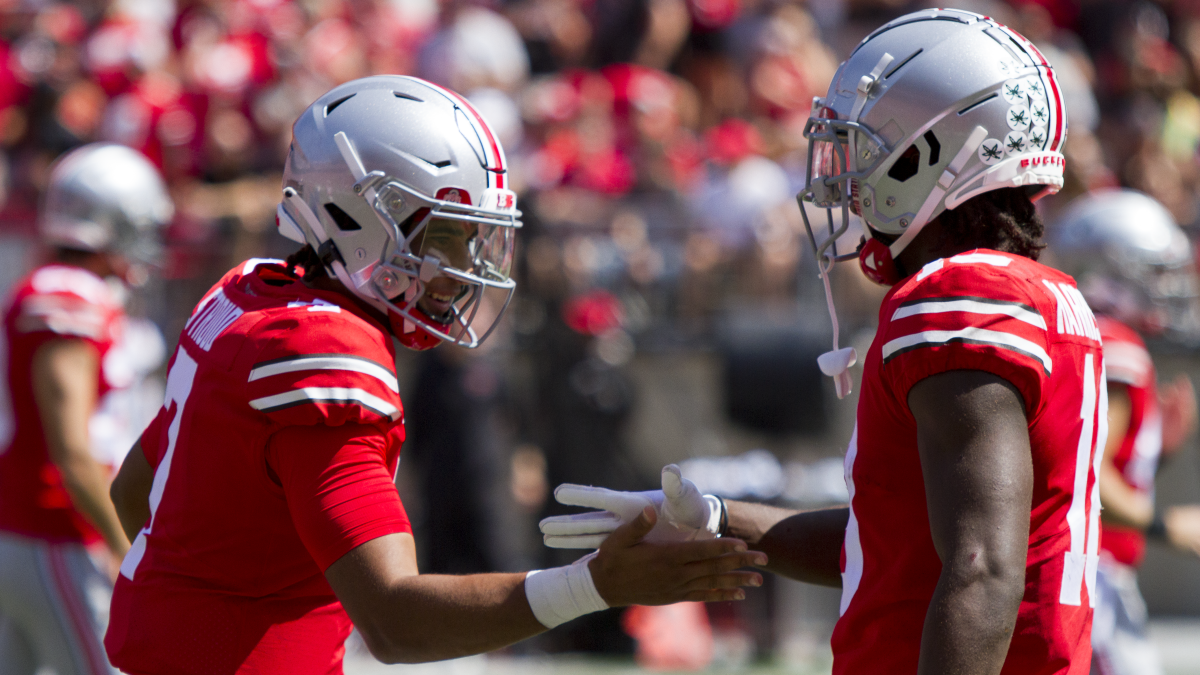 “He’s very mature for his age,” head coach Ryan Day said after the game. “To see somebody that’s played as much as he has with just the high level of route-running is pretty remarkable … The potential is there. You can see the couple plays he made, he did it a bunch of different ways.”

Harrison scored the Buckeyes’ first touchdown of the game on a 42-yarder from redshirt sophomore quarterback C.J. Stroud, losing his defender across the middle of the field and then racing past another on his way to the end zone.

The duo then hooked up on another 42-yarder with 4:24 remaining in the second quarter, which put Ohio State State ahead 24-9, as Harrison streaked down the right sideline and Stroud lofted the ball into the end zone.

Harrison’s third touchdown of the game was his most impressive, as he leaped over two defenders to haul in a 30-yarder that capped the scoring for the afternoon. He nearly had another touchdown earlier in the game, as well, but the ball was punched out of his hands as he crossed the goal line and ruled incomplete.

“Marvin was a big part of getting us going and certainly has the big play capability,” Day said. “When you’re playing against a team that really wants to load the box and pressure you at the line of scrimmage, you’ve got to win on the outside, and he did that for us today.”

With juniors Jaxon Smith-Njigba and Julian Fleming sidelined by injury, Harrison was thrust into a more prominent role on Saturday. But when they return to action in the coming weeks, his growing chemistry with Stroud will only make the offense more difficult to defend.

“Every day in practice, he just shows how great of an athlete he is,” Stroud said. “He’s one of the best route-runners I’ve ever played with, and today was just his day to do it … It definitely shows everybody – and even ourselves – the depth that we have once those guys do come back.”

Coupled with his three-touchdown performance in last season’s 48-45 win over Utah in the Rose Bowl, Harrison is now the second player in school history to catch three touchdown passes in multiple games. He joins former wide receiver Joey Galloway, who had three scores in a 28-21 win over Michigan State in 1993 and a 48-14 win over Purdue in 1994.

“It means a lot,” Harrison said. “There have been plenty of great receivers to come through here, so to be mentioned with Joey Galloway is definitely a big honor … I just have to keep working. It’s not the end, and hopefully I’ll have more three touchdown games.”

Be sure to check out our new message boards, Buckeye Forums. We’d love to have you part of the conversation during the season.

Be sure to stay locked into BuckeyesNow all the time!