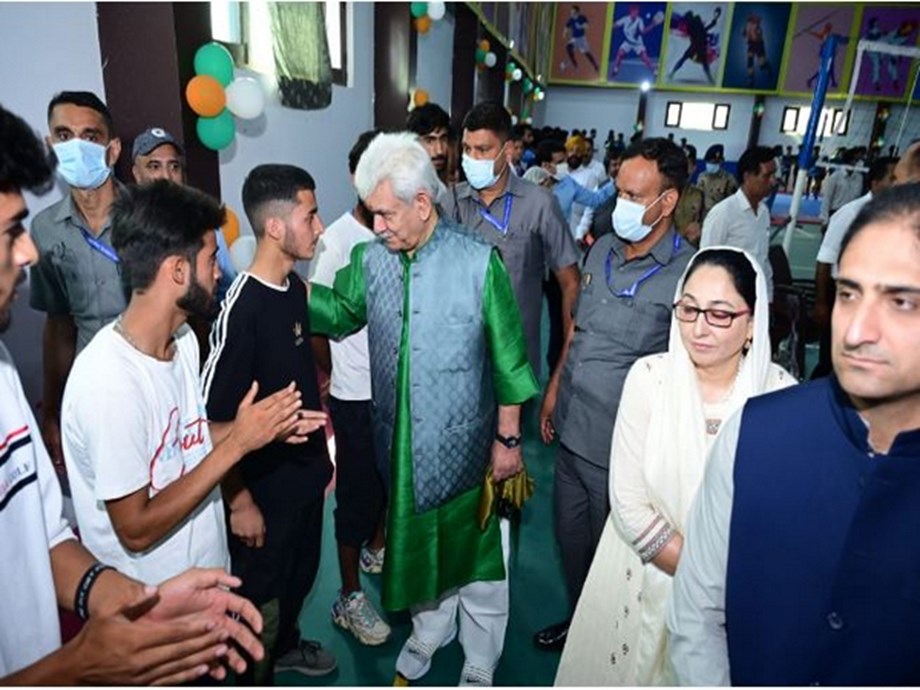 Aiming to promote sports culture in the valley, Jammu and Kashmir Lieutenant Governor Manoj Sinha inaugurated the Ellahi Bagh Indoor Sports Stadium in Srinagar on Wednesday. The stadium has been constructed at a cost of Rs 4 crore under the Prime Minister Development scheme (PMDP).

Congratulating the people, especially the youth of the downtown area, the Lt Governor said the Shahr-e-Khas area has evolved into a hub of sporting activities, with youngsters determined to achieve glory in sports. “I was told by local people that for the first time in 75 years any head of the state visited Downtown Srinagar. They said many areas were known for the wrong reasons. But, I believe Downtown, Srinagar has shed its past and it is now a new address of Indian Sporting Heroes,” Lt Governor Sinha said according to a press release.

He added that in the last two years, downtown has witnessed a massive rise in the number of sports being played and a large number of youth were pursuing sports professionally. Amid the cheers of thousands of locals present at the venue, the Lt Governor recounted names of top-class players who recently went to represent the country at international sporting events.

“Several youngsters from downtown, Srinagar have proved their mettle in International Championships. The day is not far when we will see the youth of Shahr-e-Khas representing the country in Olympics and earning a new identity of heroes and the respect for J&K and the country,” Sinha added. The Lt Governor appreciated the Jammu and Kashmir Sports Council for preparing and handing over the Ellahi Bagh Indoor Sports Stadium in record time and extended his best wishes to all the players.

“Opportunities in Sports come knocking if the players are receptive, determined and motivated. You get life only once, do something that everyone remembers. Change your life and contribute in nation building,” he highlighted. “Total 12 sports fields, and mini-stadiums in different areas of downtown Srinagar have been upgraded by J&K Sports Council with world-class amenities to nurture young talents. Determination of downtown youth to see the tricolour fly high has revived the legacy of football and other games,” the Lt Governor added according to the press release.

The growing sports culture in Jammu and Kashmir is reflected in the remarkable revolution in different sports disciplines. In the last three years, we have ensured unprecedented progress with regard to infrastructure, career progression, and the future of the players. An enabling environment through new policies has been created which fills the gap of the last 70 years, observed the Lt Governor. J&K Sports Council is making efforts to nurture sporting talent in every part of UT.

The authorities have been ensuring that the difficulties faced by the players before 2019 are not faced by the new generation players and every support is extended to hone their skills and provide them more opportunities. The Lt Governor said J&K Sports Council is looking for sporting talent so that training and other facilities can be provided to them. All sportspersons have the potential to become like Saqib Farooq, Rabia Farooq, Toria Gulzar, Tajim Fayaz, Soliha Yusuf and Farhan Ganai and bring laurels to the nation.

The Lt Governor asked the youth to take the inspirations from champions like Sadia Tariq, Shaukat Ahmed & Danish Farooq and dedicate themselves in their respective sports discipline. It is gold when you lose your entire energy in the game but only particles of dust when the energy is wasted, the Lt Governor added. The Lt Governor noted that Noon Chai with Football of the Shahr-e-Khas is being discussed across the nation. He said sports gives a new identity to the youth and the Sports Council and the UT administration are ensuring that every player gets an opportunity to play with better infrastructure and earn the identity that of a champion.

Azadi ka Amrit Mahotsav has given an opportunity to touch new heights. The UT administration is committed to facilitate the dreams of the Youth to excel in sports and represent the country at various platforms, observed the Lt Governor. We have to restore the reputation of Shahr-e-Khas, once called the heartbeat of Kashmir. Some people with vested interest are rattled by the all-round development taking place in J&K UT. Efforts were also made to mislead many of our youth. The entire families of those who misled our children, are living a comfortable life in the big cities of the country and abroad while our children have suffered. There is no place for such elements in civilized society,” the Lt Governor said.

Observing that today Jammu and Kashmir is moving ahead on the path of progress, the Lt Governor called upon the elders, parents and ommunity members to join the efforts to completely eradicate the menace of Drug addiction to give a secure and prosperous future to the new generation. On the various demands of local residents of Shahr-e-Khas and the members of the sports clubs, the Lt Governor gave on the spot directions and assured them to address each and every issue on priority.

The Youth present on the occasion also pledged to make Kashmir free from drugs. On his arrival, the Lt Governor took a round of the newly constructed Indoor Stadium, interacted with the young sportspersons and inspected the facilities there.

The Mayor SMC, Junaid Azim Mattu, while speaking on the occasion, lauded the Lt Governor-led UT Government for reaching out to the Youth from across the UT and taking unprecedented measures to develop sports even in the areas which were neglected for decades. Dr Darakhshan Andrabi, Chairperson J&K Waqf Board, extended gratitude to the UT Administration for providing resources and necessary support to the youth and sportspersons so that they can bring laurels to the UT and the Country.

(This story has not been edited by Devdiscourse staff and is auto-generated from a syndicated feed.)