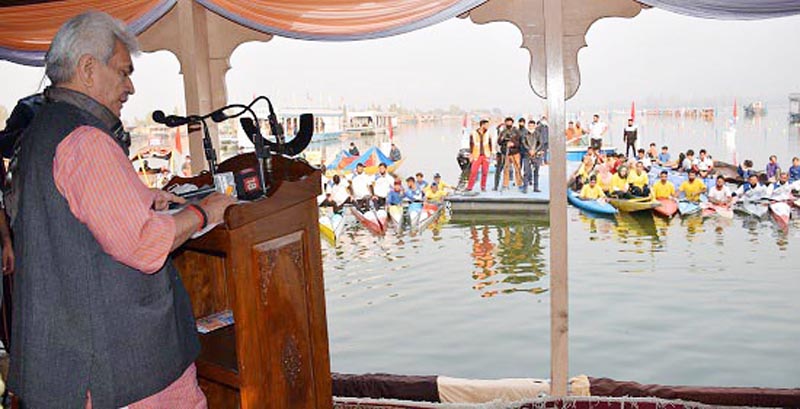 *Another Centre coming up at Ranjit Sagar, Basohli

Excelsior Sports Correspondent
SRINAGAR, Oct 28: Lieutenant Governor, Manoj Sinha today inaugurated Water Sports Centre under PMDP scheme at Nehru Park, Dal lake. The Lt Governor also launched the International Standard Water Sports Equipments on the occasion.
Sinha congratulated the concerned officers and sportspersons for completion of the Water Sports Centre at Nehru Park in record time. For encouraging water sports in Jammu region as well, a similar Water Sports Centre is coming up at Ranjit Sagar lake, Basohli, announced the Lt Governor.
The Government is working on a multipronged strategy to tap the immense sports potential to make J&K a Centre of Sporting Excellence, he added.
The region is bestowed with a number of water bodies which can be effectively used to facilitate water sports. A number of steps have already been taken in this regard. J&K has huge potential in water sports and the UT Government is aiming to promote water sports by developing water sports infrastructure like the newly inaugurated Water Sports Centre to facilitate the associated sports persons, said the Lt Governor.
J&K Government is embarked on an ambitious mission to achieve holistic development of sports in the UT. To achieve the desired results, innovative measures have been taken for the development of sports sector in the UT by ensuring modern sports infrastructure, he maintained.
Highlighting the measures taken by the UT Government for the development of the sports sector in J&K, the Lt Governor observed that for the past two months, we are working exhaustively for the development of sports infrastructure and allied activities in the UT. A number of multipurpose indoor sports halls, playgrounds, stadia and other sports related facilities have been inaugurated during the period, he added.
He said that the Government is dedicated towards identifying and promoting the sporting talent of the Union Territory. He also expressed hope for organizing eight sporting events in J&K once the COVID crisis subsides.
Sports activities help positively channelize the youth energy and we are committed to promoting every sport and providing sustained handholding to every sportsperson of the region with necessary equipment, infrastructure and facilities.
We are also focused on paving an appropriate platform for productive engagement of youth and to give necessary exposure to the local players at national and International level is he continued.
Sports kits are being provided in every panchayat with the hope that the entire young generation is provided exposure to sports. Stadiums and indoor sports complexes would also help improve the skills of such aspiring sportspersons. We are going to provide Olympic-level training in 53 different sports to our energetic youth.
The Centre has been provided with facilities of international standards and in the coming days, we’ll set up a Water Sports Academy also, in which our focus would be to provide proper mentoring and monitoring to our talented athletes. I am sure that with such facilities and provisions, an Olympic medal won’t be a distant dream, the Lt Governor maintained.
The Lt Governor called on all the stakeholders to put in extraordinary efforts to nurture the sporting talent, especially among the youth. I hope more corporate groups come ahead and sponsor water sports and its athletes, he said. He also underlined the importance of preservation of the Dal Lake through sporting activities.
The Lt Governor also hoped that the youth grab the opportunities provided by the government, and positively transform their energies and raise the Indian Tricolour high in international tournaments.
Impressive Paddle past marked the opening of the event followed by the cultural performances. The occasion also witnessed race competitions in water sports, besides demonstrations of various water sports and activities.
Farooq Khan and Sh. Rajeev Rai Bhatnagar, Advisors to the Lt Governor; Navin Kumar Choudhary, Principal Secretary to the Government, Agriculture/Horticulture, & Cooperatives department and President, J&K Association for Rowing & Sculling; Pandurang K. Pole, Divisional Commissioner, Kashmir; Sarmad Hafeez, Secretary to the Government, Youth Services and Sports, Tourism and Culture Departments; Dr. Naseem Javaid Choudhary, Secretary, J&K Sports Council; prominent sports personalities including Bilquis Mir & Zahoor Ahmad Latoo and public in large number were present on the occasion.