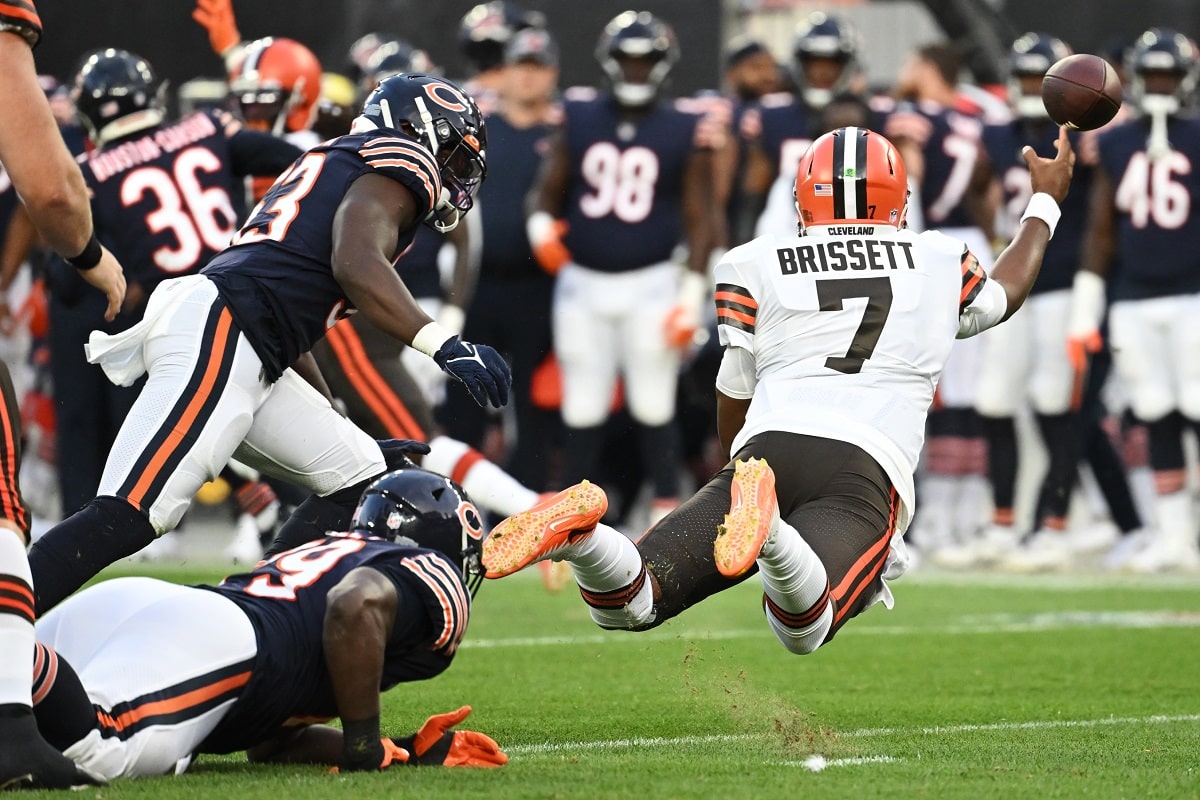 The big story of the Chicago Bears‘ preseason finale was Justin Fields. Rightfully so. The young quarterback was outstanding, going 14-of-16 for 158 yards and three touchdowns. It was the kind of performance fans have waited for, preseason or not. He had every right to enjoy the spotlight. However, he wasn’t the only one who enjoyed a good night against the Cleveland Browns. So did defensive tackle Justin Jones.

He had a tackle for loss in the first half and harassed the quarterback multiple times, demonstrating why the Bears worked hard to sign him in March. He wasn’t the only one. Several members of the defense enjoyed a solid first half. Cleveland only scored three points, and those came after the starters had been pulled late in the 2nd quarter. Jones told Mark Potash of the Chicago Sun-Times how Saturday was a taste of what’s coming.

“Everybody wasn’t out there today, which is OK. But you’re starting to see the DNA of our defense,” said Jones, who also batted a pass at the line of scrimmage for an incompletion. “Even if a tackle’s missed, you see 10 to 12 guys — notice I said 12 — running to the ball, flying to the ball and making it seem like we have more players on the field than there actually are. That’s the key to success — the effort to the ball and making sure that everybody’s in the camera.”

That shouldn’t be a surprise. He feels he is finally playing in a defense designed to take advantage of his physical strengths. Not only that, but he’s also playing under a veteran coaching staff led by Alan Williams. Yet what gives him the most certainty that the Bears defense will be good in 2022 is that they did it despite not being at full strength.

“When we play Week 1 we should have everybody back, and that’s going to be real scary for a lot of teams.”

Justin Jones knows how good this unit can be.

Multiple starters were held out from playing in the game. Robert Quinn, their star pass rusher, didn’t play. All-Pro linebacker Roquan Smith was set to debut but experienced some hamstring tightness before the game. He was held out as a precaution. Top cornerback Jaylon Johnson and safety Eddie Jackson also didn’t play. This doesn’t even include promising rookie Jaquan Brisker sitting out with a hand injury. So four of the best players on defense didn’t play, and the unit still pitched a shutout while they were on the field.

It isn’t hard to understand Justin Jones’ confidence. He knows what the defense can do once they have all the horses in place. There is talent at every level. Combining that with a proven scheme and a capable coaching staff should lead to results. There will probably be difficult weeks ahead. It is still a defense in transition, having to switch from a 3-4 scheme. Still, if guys play up to their abilities, Jones isn’t wrong. It could be another good year from the Bears’ defense.