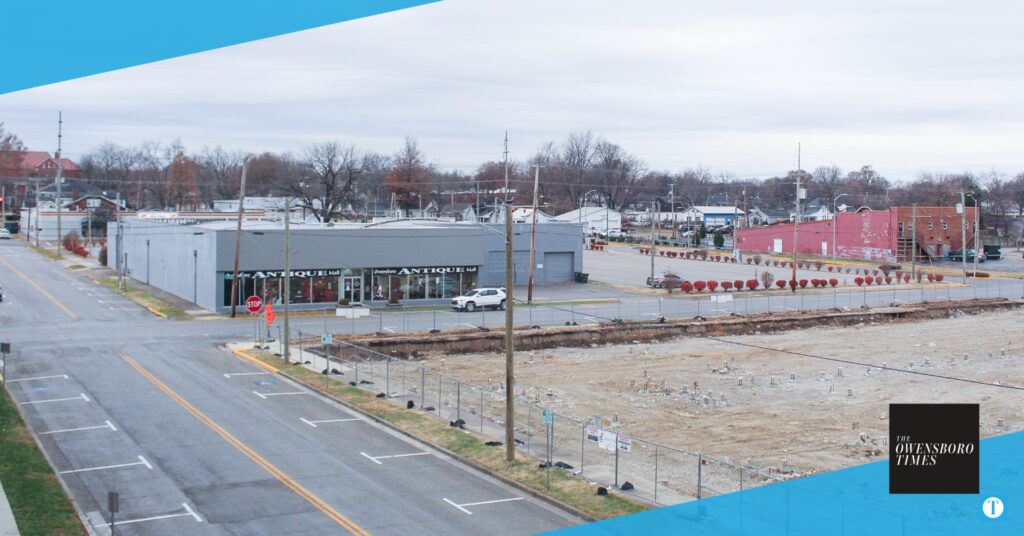 It appears the proposed $19 million indoor sports facility will be built downtown. City Commissioners on Tuesday will vote on whether to purchase the full block of properties housing and surrounding the Owensboro Antique Mall — which is one block directly south of a future hotel and two south of the Convention Center.

City Manager Nate Pagan said Commissioners will vote on acquiring the group of properties located in between West 3rd and 4th streets and Locust and Cedar streets as well as a roughly $44 million bond agreement.

All of the properties are currently owned by Gipe Enterprises. The Owensboro Antique Mall operates at the corner of West 3rd and Locust but has already announced it will be closing in the coming months.

Pagan said that in the previous City Commission meeting he alluded to an upcoming proposal for the location of the indoor sports facility, which has previously been referred to as the Sportsplex.

Commissioner Jeff Sanford said the block behind the Riverfront Brio hotel — which has still seen little progress but will eventually take up the block between West 2nd and West 3rd Streets and from Locust to Cedar — will be a prime location. For Sanford, and other city officials, a major priority was location and accessibility for guests — and he feels the location provides exactly that.

“If you had a massive tournament and you needed more space, well, you’re within walking distance to the Convention Center. So if you were staying anywhere downtown or no matter where you’re staying in Owensboro you get downtown,” Sanford said.

Sanford was the only commissioner who discussed the specific proposed location. Other commissioners — admitting they knew of a proposed location but not addressing where it was — said that other locations were provided to them but that the final proposal provides ease of parking with the parking garage nearby the street, and that the destination will draw people to the area.

The 88,000-square-foot facility is still estimated to be complete by December 2024, according to the latest City Projects List.

A representative from Pinnacle Indoor Sports previously recommended that the sports complex have five courts that could host basketball, volleyball, futsal, wrestling and a plethora of other matted sports. Along the courts, there would be a 100×200-foot turf area that would provide a space for indoor soccer during the winter months and a “camping” spot in between games for the matted sports teams.

Each commissioner had a different perspective on what they hope the facility will be able to provide.

Sanford said from his history traveling as a coach and a parent of athletes, he’s seen numerous sports facilities throughout the nation and the lesson he’s learned is that accessibility to other spaces is paramount.

He said he often had to trek between spaces that were just not feasible to get between games, but the proposed Owensboro Indoor Sports Facility location provides easy access for hotel transportation, food, and more.

Commissioner Bob Glenn, without mentioning the location, said that a main priority for him is the accessibility of the facility to senior citizens.

“Grandparents tend to like to go see their kids and grandkids play and I would think that we want to make sure — as I am sure it will be — that it’s ADA [Americans with Disabilities Act] accessible,” Glenn said.

It was also key for him that the facility be able to accommodate as many different sports as possible.

“The more sporting events that are out there that we can accommodate, the better off we’re going to be and the more useful the facility will be,” he said.

Flexibility in types of sporting events is also a top priority for Commissioner Mark Castlen. He has previously mentioned in Commission meetings that the facility would benefit from including a pickleball court.

He added that the pickleball community in town hosted a large tournament which would have benefited from having an indoor court. Another feature he thinks would be beneficial is adding a removable boxing ring.

“Boxing is something that would be used … I feel like it’s something that a lot of our youth could use and help them burn off some of that excess energy in a positive way,” Castlen said.

All Commissioners and Mayor Tom Watson also agreed that while $19 million takes up almost half of the 20-year bond they will be voting on, they think it’ll be something very beneficial for the city financially.

Watson said that it’ll automatically make Owensboro more competitive of a location when it comes to hosting large-scale tournaments and help boost the tourism in the city.

“It would certainly make us more competitive with some of the other communities that have indoor sports, so I think it’s gonna be a really nice asset for our community,” Watson said.

Glenn echoed those sentiments, saying other surrounding cities like Madisonville, Henderson, and Evansville have publicly funded sports facilities — either indoors or outdoors — which draw in thousands of people over the course of the year.

Being able to pour in $19 million will ensure that the city’s facility not only draws in a good crowd but will also succeed over time, he said.

“I think the amount we’re looking at is going to make sure that the facility is not a metal pole barn, that it’s an outstanding facility among competitors,” Glenn said. “I think that’s a solid investment that will return millions to the community over the course of its lifetime.”