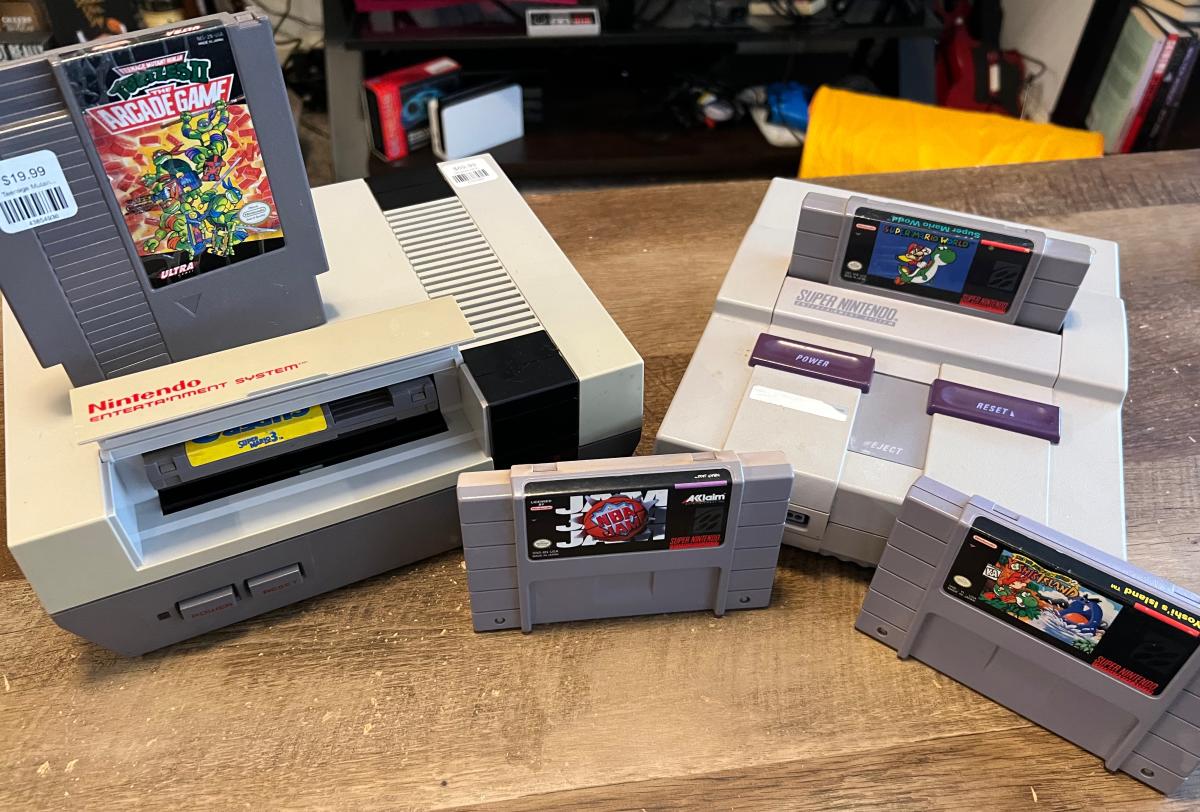 I’ve been playing video games since my parents bought my brother and me a Nintendo (NTDOY) Entertainment System one Christmas in the late 80s. The two of us spent hours trouncing goombas and fighting Bowser, my brother as Mario since he was older, and me as Luigi. In the 90s we got a Sega Genesis and played “Road Rash,” then a Sega Saturn, a PlayStation (SONY), and so on.

Eventually, we started buying our consoles and games, and, since we were still kids, decided to trade in our older systems for store credit at places like Babbages and Electronics Boutique, now GameStop (GME). At the time, it was a great idea. We got new games and consoles and got rid of the ones we weren’t playing.

As you can imagine based on the headline of this article, though, I regret the move. We gave away a slew of the game that we loved and consoles we spent hours playing.

So my wife and I are trying to build a collection of old games and consoles one at a time. But doing can be a pricey hit-or-miss proposition. The pandemic forced people inside for months on end, and during that time a lot of former gamers went back to the games they loved, buying up old consoles and cartridges.

It doesn’t help that none of these systems or games, heck, even the original TVs they were meant to be played on, are being made anymore. And that means they’re also degrading over time.

From hard-to-find titles and busted systems to dead game batteries and frayed wires, collecting retro games is far from as straightforward as pulling up to a Best Buy (BBY) and grabbing a PlayStation 5 game off of the shelf. But when you find that one game you’ve been looking for, or score a long-lost cartridge you’ve always wanted to show to a friend or significant other, it’s all worth it.

My wife and I started buying older games after we took a trip to Digital Press, a retro gaming store in New Jersey, as part of a story my former-colleague Nick Monte and I did for Yahoo Finance. My wife purchased an original PlayStation and “Namco Museum Volume 1,” a collection of old Namco games she played with her parents when she was a kid.

But older consoles and games are a different story. A Nintendo Entertainment System (NES) is nearly 40 years old at this point, and consoles aren’t exactly indestructible. Connectors inside and outside can splinter or break, preventing games from displaying properly and internal parts can corrode, killing systems entirely.

Check eBay (EBAY) and Super Nintendos are for about $100. That’s not incredibly pricey, but many of them are chipped or damaged. Others are only available for spare parts. The ones that are in great shape, meanwhile, will cost you $150 or so after shipping. Want one with the original box, you’re looking at anywhere between $300 and $1,200 depending on the condition.

Last week, I bought a Super Nintendo for $180 with three games, but the console was a dud. Thankfully, I was able to return the console and get my money back. But that’s simply the risk of buying consoles that are old enough to legally drink.

Games are aging and dying

Just like old-school consoles, retro games are aging and becoming more expensive as time passes. I’m not saying that a copy of “Super Mario Bros.” is going to cost you $50, but titles like “Chrono Trigger,” a beloved Japanese role-playing game, can set you back as much as $225 for the cartridge alone.

And if you’re the type of person who wants a pristine game complete with the box and manual, you’re looking at spending prices ranging from the hundreds of thousands to millions of dollars. Needless to say, I’m not a part of that group.

But there’s a bigger problem. Super Nintendo games in particular sport internal batteries that allowed gamers to save their progress. However, those batteries were never meant to last more than 20 years. There are some online explainers that can walk you through the process of swapping batteries, but you also run the risk of destroying the game itself.

Oh, and remember when you thought blowing into your old Nintendo and Sega cartridges were the surefire way to get them working when they were buggy? Turns out all that did was ruin them by getting them wet from the moisture in your breath.

Sure, there are still plenty of games out there that aren’t too inexpensive, but as time goes on, they’ll be fewer and further between.

I have a 65-inch OLED TV, and despite how great modern games look on the big screen, old-school games just don’t hold up on it. That’s because older titles were built with CRT TVs in mind. You know the ones I’m talking about. The TVs with rounded screens took up tons of space. They helped smooth out the jagged edges around the pixels that made up old games, giving them a better overall appearance.

And those TVs, while nowhere near as expensive as a brand new set, will still cost you around $130 to $150. I recently purchased a 20-inch Magnavox set thinking that I could put it in my living room next to my 65-inch TV, but I dramatically underestimated how large the set would be.

At 30 inches deep, the Magnavox is too big for my shelf. And tipping the scales at 50 pounds, it’s way too heavy for anything short of a proper TV stand. So now I’ve got a 20-inch TV that’s sitting in a box in my basement until I can space for it.

My wife and I have easily spent several hundred dollars on our gaming collection over the past few years. And that’s just for the consoles. We’ve still got games that we want to pick up too. While we could hold on to these retro systems and titles for years and try to sell them for a profit, that’s not what we have in mind.

Our collection is meant to be played. And when we eventually have kids, we want them to be able to see the kind of games we played growing up.

And that alone, makes the search, and price, worth it.

Click here for the latest stock market news and in-depth analysis, including events that move stocks

Read the latest financial and business news from Yahoo Finance

Download the Yahoo Finance app for Apple or Android