How this warehouse space became an outdoor sports hub 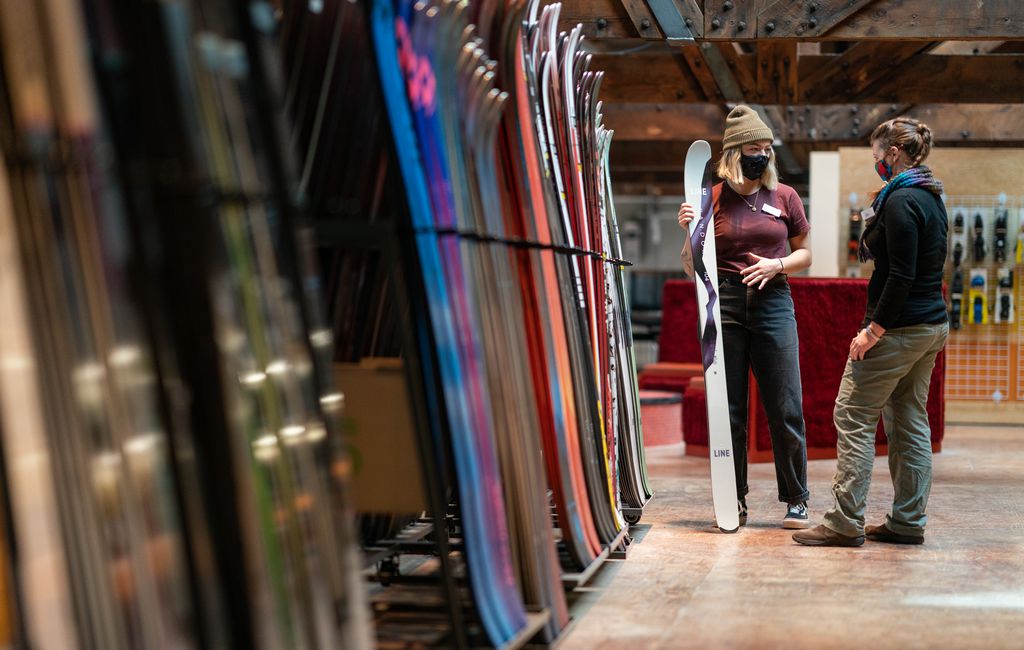 Two major retailers have created a new outdoor sports center in one of Salt Lake’s hottest areas: the Granary District.

In addition to retail locations for evo and Level Nine, it includes Bouldering Project, an indoor climbing gym; All Together Skatepark, an indoor-outdoor skate park created by evo; and the dog-friendly evo Hotel, which opened in early February. The hotel includes a rooftop bar, local roaster Publik Coffee and art created by Salt Lake artists in all of its 50 rooms.

Campus Salt Lake’s grand opening was June 4, but the build out is not yet complete.The Market Hall will feature a variety of “interesting, innovative and downright cool businesses,” according to Campus Salt Lake’s website.

“The term that we use is ‘rising tide,’” said Rebecca Heard, VP of brand, marketing and e-commerce for evo. “If we can have a group of complementary businesses come together, [they’re] not in competition [with] each other. Ultimately, it’s just a better experience for the customers.”

The building consists of five previously disjointed warehouses, with one section of the building designated as a National Historic Landmark, per Campus Salt Lake’s website.

A search of the National Historic Landmarks list and the National Register of Historic Places database show no entries for 660 S. 400 W., Salt Lake City.

The National Historic Landmark database lists the building at 404 W. 400 S. as the W.P. Fuller Paint Company and Office Warehouse. No entry exists for the Salt Lake Rapid Transit Complex.

When asked, Van Horn restated the company is “comfortable confirming that [the building] has been registered as a National Historic Building, or something very similar to that.”

The Granary District, where Campus Salt Lake is located, was once an industrial area built around Salt Lake’s railroad corridor.

Located a few blocks south of downtown and bounded by 600 S., West Temple and 1-15, the area gets its name from massive grain silos, some of which still stand, according to Visit Salt Lake. It was once home to Salt Lake’s oldest flour mills.

The area fell into disrepair when the rail lines moved to the west, but has since attracted musicians, artists and restaurateurs.

Level Nine Sports CEO Mitch Lamb said the Granary District is unlike anywhere else in Salt Lake, and that’s what people love about it.

It would have been cheaper to knock the building down and start from scratch, he added, but preserving the area’s history was important to them.

“When you walk into our space, you’ll see the bricks, its wooden timbers, and you’ll actually see someone’s name inscribed on [a] brick from 1932,” Lamb said. “It’s crazy to think that it’s been around for that long, and we’re… not only preserving it, but revitalizing it.

Lamb said he’d always had “a ton of respect” for Phillips’ company, and so suggested a collaboration between evo and Level Nine.

He invited Phillips to see Level Nine’s Salt Lake location, housed in the building that is now Campus Salt Lake. (Level Nine Sports has three other locations in Orem, Millcreek and Ogden.)

“I said, ‘Let’s just join forces’,” Lamb said. “‘Our brands are overlapping, but they’re unique enough to where we can actually offer more value to the customer.’” (Level Nine specializes in skiing, snowboarding and bicycling gear, while evo sells similar products and also water sports and camping gear.)

Heard said Campus Salt Lake was made possible in part thanks to a historic tax credit program.

To qualify for the tax credit, the building must be preserved and restored to maintain its historic integrity, Heard said.

“We worked closely with the National Park Service to integrate the new uses in the building in a manner that left the historic structure exposed in order to give new life to the building,” she said.

Lamb said that Campus Salt Lake will make a significant economic impact due to its “attractive product mixes,” memberships generated by the climbing gym, hotel stays and food and drink spots.

“We’re not talking double, triple (growth). We’re talking 10 (to) 15 times what existed before,” he said. “This is an organic, evergreen property that isn’t just a quick retail store, but is one that addresses a myriad of needs for a large consumer base.”