How the water crisis is impacting Jackson residents 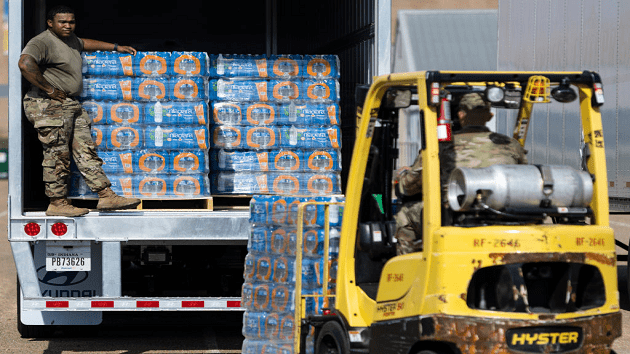 (JACKSON, Miss.) — Jackson, Mississippi, resident Velma Warner says the city’s most recent flooding brings up memories of two years past, when Pearl River floods forced many in the Canton Club neighborhood of Northeast Jackson to leave their homes.

Though Warner and her family had time to prepare their home for potential water breach, the effect flooding would have on the city’s water supply posed another–not entirely unpredictable–issue, she says. One month after the city issued a boil water notice, damage to the nearby O.B. Curtis Water Treatment Plant has left Jackson’s water supply contaminated and largely depleted.

“This is an ongoing issue, like years of knowing that the water plant needed a lot of work,” Warner said to ABC News. “I think our concern as citizens is even after all of this, after they put all the money into the water plant, will we have qualified staff to continue to run the plant?”

As city and state officials facilitate plant repairs and establish state-run water distribution sites throughout the city, making “significant gains”, local organizations such as Operation Good continue to work tirelessly in their efforts to get drinking water to as many as possible. Operation Good’s program manager Gino Womack says demand has even increased throughout the week, adding that the nonprofit went through hundreds of cases of water within an hour. Womack says contributions across the country have made an incredible impact on their ability to keep up and encouraged engagement in their #CureViolence program.

“It’s good to see the people, everybody, coming together, working together to get through this time that’s going on. And there’s people from outside the city…that have been very very supportive of things going on here,” Womack said to ABC News. “A lot of their support has enabled us to continue providing water to the citizens.”

Community members like Deon Thompson, a neighbor of Warner’s and an advocate for his community for the 20 years he’s lived there, has also taken it upon himself to get safe drinking water to as many people as he can. He says that for the first couple of days, water was nearly impossible to find in Jackson, but state distribution sites run by the National Guard have made it more accessible.

“There was some people that actually didn’t know about the distribution sites that [the state] had set up,” Thompson said to ABC News. “So we were able to go to those sites and get water for our communities, and then we stretch beyond our community to the others, like the elderly and those that actually couldn’t get out because we do have some disabled people in the neighborhood as well.”

Thompson, who was also affected by flooding in 2020, has lived throughout Jackson for over 50 years–his entire life. While this week’s flooding was not as severe as it has been, coupled with a failing water treatment plant and racial disparities indicate severe ongoing issues that may lead others in the neighborhood, including his elderly mother, to leave for good.

And with chances of rain on the radar this weekend, he says some residents are waiting for “a definite” before moving their belongings, paying storage fees rather than taking the risk of having to go through it all again.

“The flooding is one thing that has been going on and this water problem, with us drinking it, didn’t just start like back in July as some people say. This has been going on for the past three or four decades,” he said, adding that it reminds him of the Flint water crisis in which lead contamination in the city’s water supply hit communities of color hard.

“Race plays a very important part in this,” he said as Jackson has an 82.5% Black population according to the U.S. Census.

Thompson also voiced his concerns about how housing developments around Ross Barnett Reservoir, Jackson’s historic and current major source of potable water, have contributed to the flooding, a concern echoed by Warner. With this in mind, Thompson says he is focused on ensuring that the underlying causes of Jackson’s water emergency don’t “fall through the cracks.”

“We’re gonna assist and do whatever we can,” he said of seeing that officials make the necessary efforts to resolve the crisis.

“The progress that is being made there now as we even speak, it’s little progress, but little progress is better than no progress. And we have to kind of look at it from that standpoint and be very sure that our government officials are gonna do what they said they’re gonna do,” he added. “We’re gonna have to get through this here one day at a time. We’re gonna help one another, and we need to encourage one another because we don’t want people to leave.”