Hints of autumn in the air | News, Sports, Jobs

A molting female chestnut-sided warbler will swap out these colors for green and grayish-white plumage before heading to Central America for the winter.

August tends to have a touch of melancholia for me.

While still sultry and full of daylight even in the Upper Peninsula, August carries enough hints of the change of season ahead to be a little depressing, at least for me, as summer wanes and the region begins to shift toward the winter to come.

Grasses have turned tawny and brown as they go to seed. Bumble bees, wasps and ants produce new queens, to start that next generation that will endure the winter and hopefully carry on next spring.

Most birds that successfully nested now have fledged all the offspring they’ll have for the year, though a few species, such as American goldfinch and cedar waxwings that rely on the seeds or fruit only available later in summer, are just finishing up. 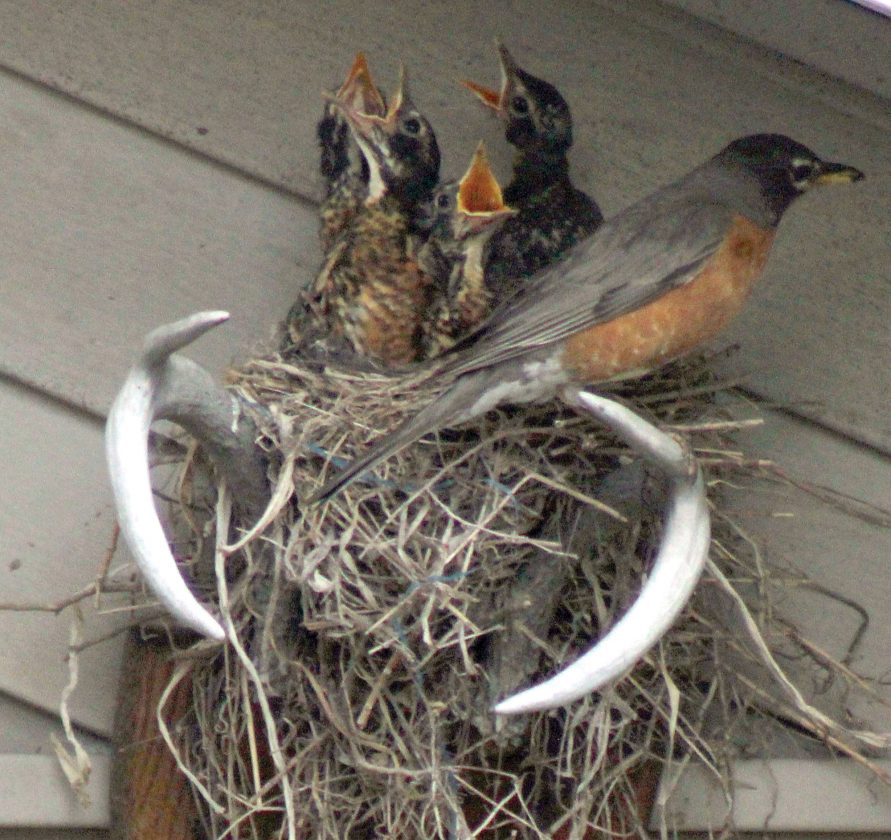 A mother robin and four babies nested in deer antlers hung above John Proudfit’s garage in Iron Mountain. This could be a third brood the birds raised this summer.

The local warblers still present now are a mix of motley, molting adults and their offspring, massing to make the move south. Young vireos and flycatchers have been showing up as well.

Though they lack the color of the adults, these juvenile birds tend to be visible as they learn how to forage for themselves and do at least provide some indication of a productive summer.

The resident eastern phoebes were able to raise at least two broods to fledglings on the property, good news for a species that reportedly took a major hit during the extreme cold that hit Texas this past winter. They may linger into September.

But the Baltimore orioles, adults and young, are gone from Six Mile Lake — though they visibly nested here — along with the rose-breasted grosbeaks. The last birds to arrive in spring often seem to be the first ones out in late summer.

The first common nighthawks, distinctive in their swooping flights and beep-like “peent” calls, already have begun moving through, a trickle of individuals now that will grow into flocks. Ducks, geese and sandhill cranes are congregating, as are a number of the songbirds.

At least the resident ruby-throated hummingbirds still are here, chittering and jousting among themselves at the nectar feeders, which need to be filled more now than at any time during the spring and summer. The adults seem to want to control the youngsters, creating acrobatic aerial dogfights over access to the feeders. We still have adult males that get the most testy about sharing but could see those vanish any day now, as like the orioles the adult males tend to be first back, first to depart.

A reminder, though, that even when local hummingbird activity slows, keep the feeders up for ones that might still come through from points north or west, which can happen well into the fall. They’ll need the energy boost.

These transition seasons usually are a little letdown — winter snow recedes to reveal a sodden mess before spring restores the green, late summer loses that luster of new growth and energy, the glorious colors of autumn eventually fade to grays and browns until the snow arrives to cover it all.

But at least the winding down of summer will usher in arrival of new birds soon, even if just passing through.

A molting female chestnut-sided warbler will swap out these colors for green and grayish-white plumage before heading to Central America for the winter.

A mother robin and four babies nested in deer antlers hung above John Proudfit’s garage in Iron Mountain. This could be a third brood the birds raised this summer.