High school sports on ice: Can there even be a winter season? 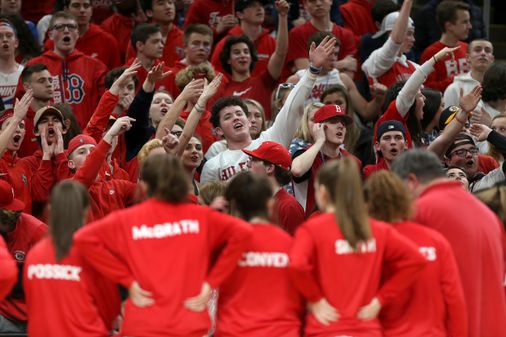 “Hope for the best,” she said. “Prepare for the worst, and make the best of whatever is decided.”

As of Friday, no state had canceled winter high school sports because of the pandemic. That did not mean it was game on.

Massachusetts, whose winter season is scheduled to start Nov. 30 and run through Feb. 21, was one of 10 states that had not announced plans, according to the National Federation of State High School Associations. The MIAA was waiting for guidance from the state’s Energy and Environmental Affairs office that will shape how, or if, winter sports will be played. The EEA’s recommendations are expected by Nov. 7.

Athletes, coaches, staff, and administrators played through the fall season. They had to adjust to numerous modifications in their sports. Some are feeling like pandemic pros, ready for the next season.

Some realize they may be waiting until spring.

“There are going to be a lot of challenges,” said Duxbury athletic director Thom Holdgate, co-chair of the MIAA’s COVID-19 Task Force.

Fall sports had significant modifications. State tournaments were canceled to keep teams from traveling (the MIAA has done the same for the winter). Many teams competed solely against nearby schools in pods. Mask usage was widespread, if not required all the time; and social-distancing rules and limits on physical contact kept players from breathing heavily on each other. Changing areas and sidelines were set up to keep everyone apart.

But it is tough to keep one’s distance indoors, particularly in contact sports such as wrestling, basketball, and hockey. In 2019-20, other than soccer (25,758 boys and girls), basketball had the highest participation level of athletes (21,476) in the MIAA, followed by indoor track (19,460). Hockey had 9,712 players.

“We’re sort of splitting hairs when we talk about which indoor sports are safe,” said Arjumand Siddiqi, division head and associate professor of epidemiology at the University of Toronto.

“We can probably have that discussion about some being safer than others, but when you pull the lens back, the issue is anything indoors right now where people are congregating and being in that space for an extended period of time is very worrisome.”

Swimming and gymnastics could be safer, because schools can have remote meets, at their own facilities, with judges at the two sites. The Bay State Conference is successfully conducting remote swim meets this fall.

That’s not possible in wrestling, but NFHS executive director Karissa Niehoff is seeing state associations pin down “some creative thinking” nationally, including regular sanitizing of mats and changing of singlets after matches.

One of the major issues in track is facilities. The Reggie Lewis Center, a hub of Eastern Mass. meets, is closed until at least January because Roxbury Community College is remote-only. Many local gyms are being used as cafeterias and classrooms.

Basketball could follow a volleyball model, with regular sanitizing of the ball, a lack of spectators, and masks worn throughout competition.

Hockey, which was shut down in Massachusetts for two weeks because of a state-mandated rink closure, through Nov. 7, could see games without contact and with full-time mask usage. Governor Charlie Baker said this past week that hockey games were clearly fueling infections, aided by a “lack of cooperation” from adults contacted by contact tracers.

“There’s certainly a range of how risky things are,” said Andrew Lover, an epidemiologist who teaches at UMass. “Certainly wrestling, indoors with close contact, everything about that setup is problematic. Hockey is especially problematic. The virus is more stable at colder temperatures. In most of the smaller community hockey rinks, the air quality is really bad.”

Ideally, Harvard epidemiologist Bill Hanage said, all sports would be played outside. If they’re played at all.

He emphasized an idea taken from Japan: the 3Cs. That means avoid creating situations with crowds, close contacts, and closed spaces.

Will that be possible in the winter, with athletes huffing and puffing indoors?

Canton High ice hockey goalie Carolyn Durand didn’t have to wear a mask when she played in a summer showcase tournament in New Hampshire, where restrictions are more lax. She only had to wear one in the locker room and around the rink.

She is hopeful parents will be allowed at games this winter. She plays field hockey, and only one parent is allowed.

“It will be hard to adapt to these because a lot of times some of the girls get their motivation from the cheering of the crowd and our teammates,” she said. “Also, if we have to wear masks on the ice it may be harder to breathe, so we will have to adjust to that, as well.”

Some athletes, such as Boston English junior point guard Mekhi Dedrick, fear that a cancellation of winter sports would rob them of college opportunities.

During the pandemic, Dedrick has been practicing three days a week with his AAU club, Mass Rivals, and has played in a few tournaments in New Hampshire. Boston English recently competed in the Beantown Slam at an outdoor court in Boston, but the prospects of a Boston City League season are looking bleak.

“A few colleges have reached out to me with interest,” Dedrick said. “The thing is, they wanted to come see me this year. Due to [the coronavirus], they might not be able to do that. There has been no fall sports in the city.

“If the season doesn’t happen, the only thing I really could do is work out. Any games I could get involved with, I would participate in. And if we’re not playing, this really gives me time to work on what I’m not good at, being a better shooter, better ball handler, and a better leader, because that’s what they want to see from a point guard at the next level.”

As of Thursday afternoon, more than 16,000 people had signed a Change.org petition decrying a possible Massachusetts winter sports cancellation. In calling for a delay instead, the petition cited a study by the JED Foundation and American Foundation for Suicide Prevention that quantified the decline in mental health in high school and college students. If presented to administrators, coaches, and players, it would be preaching to the choir.

“Without sports, these kids are going to be hurting,” English boys’ basketball coach Eric McKoy said. “It’s already tough enough they’re doing their school work online. They don’t have the structure they need. We have to have a season to keep these kids motivated.”

Lover said young athletes are themselves unlikely to have major problems with COVID-19, if they catch it. “But then they go back to their homes and communities,” he said. “From a broader societal perspective,” he said, indoor sports in a pandemic are a “terrible idea.”

At Thursday’s MIAA Board of Directors meeting, president Jeff Granatino, superintendent of the Marshfield Public Schools, was realistic. Sports, he said, are “such a boost for their social and emotional well-being . . . But obviously we’re up against some forces that are out of our control.”

“It is going to be sad if [we don’t have a season],” she said. “I am just hoping that people follow social-distancing rules and that the MIAA is going to allow us to play because it really would stink if we weren’t able to. But if we’re not, that doesn’t change anything for me working-out-wise; I’ll still be in the gym every day.”

That’s not possible at some schools.

“Our gym now has 160 desks in it,” Wellesley AD John Brown said. “To think those desks can be moved every day to play ball, then put back in place . . . we’ll do whatever we have to do.”

Grange can’t get her basketball players together for workouts because both gyms on campus are “covered in chairs, for classrooms and lunch.” But after the way her girls’ soccer team performed this fall, she’s hopeful.

She wasn’t sure it was going to work when players were goofing off in the weight room during those first preseason gym sessions. But they soon created good habits. Her players reported their symptoms — even if they turned out to be allergies. A captain bought team-colored masks for everyone. With fewer games on the schedule, practices became team-building exercises, with mini-games and goofy trivia played for points and the prize of a WWE-style championship belt.

In short, they had fun. They were happy to be out there, weird as it was. The whole season, Grange said, “there was no complaining about masks. I only had to remind a couple players. They know they had to follow the rules to be out there.

“I know they’re going to be stronger mentally and emotionally having gone through it.”