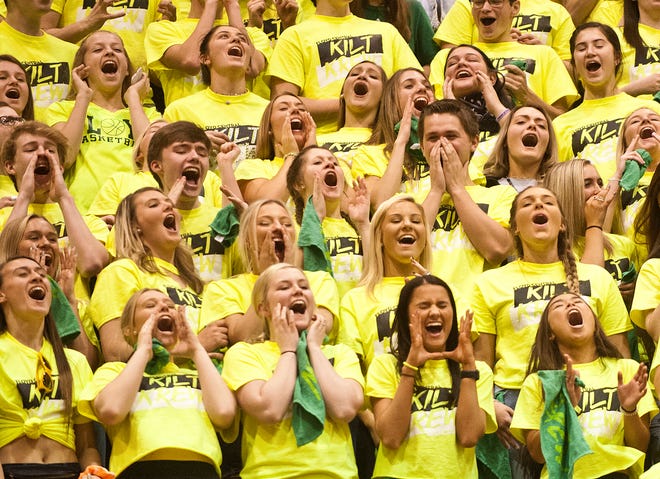 Centers for Disease Control and Prevention states that indoor activities increase the risk of spread of COVID-19 and recommends people avoid attending indoor events, if possible.

In Indiana where basketball is king and a regular Friday night game can gather thousands of people at a high school gym, health officers shared their worries with congregation of large crowds in an indoor setting.

“If it’s outdoors, you have diffusion, so that lowers the risk. You have wind that ensures air circulation and most importantly, you have ultraviolet light, which kills the virus. All those things conspire to lower concentration of the virus,” Floyd County health officer Dr. Tom Harris said. “Indoors, you don’t have that. Most gyms have pretty good air circulation, but it’s not outdoors. They’re jammed into a fairly small space.”

That Indiana, along with the rest of the country, is seeing spikes in cases of COVID-19 recently isn’t helpful either. According to the Indiana State Department of Health, the state has seen more than 2,000 new cases of coronavirus per day in the past week, including Wednesday, shattering its single-day record with 3,649 new cases of COVID-19.

Clark County also moved from 1.5 (yellow) to 2 (orange) on the county metrics Wednesday. The metric is based on the average of scores assigned for the number of weekly cases per 100,000 and its seven-day positivity rate.

As a result, the county health department announced Wednesday that K-12 extracurricular activities and sports events will have attendance restrictions for two weeks, effective Friday.

“We’re back up to first of May level. That’s the concern,” Harris said. “Winter sports are starting in that environment. The good thing is there’s been really good efforts by the school system to mitigate it. The governing body of IHSAA has a bit more realistic plan for a good winter season.”

More:Here are the storylines to follow for the 2020-2021 IHSAA girls basketball season

For basketball, because social distancing is practically impossible during play, there’s not much that can be done to alter the game, besides perhaps being wary of huddles. Both Harris and Clark County health officer Dr. Eric Yazel emphasized the importance of screening before game. Limiting interactions before and after games between teams is also important. But health officers are more concerned about what’s happening off the court.

“Obviously, everyone’s playing hard, breathing hard. Your defense is getting chested up on something, so there’s risk. That’s something you have to deal with and understand that there well may be exposures and there might be postponements,” Yazel said. “Just have to navigate it as best we can. There’s not a lot of whole lot we can control on the court. It’s more off the court things we can try to minimize.”

It starts with limiting fan capacity. Schools have proposed different plans, which would allow 20 to 30{066dbc63777e5ed549f406789d72fdeebd77a32711d57f7b38ff2b35c4ba2a42} capacity at most, according to Yazel. The crowd would consist of families of players and coaches and very few community members.

“There’s 10 players on the court and we know the secondary infection rate for COVID is closer to 2 now. Worst case scenario, we have 10 guys down there and each people get 2 people sick, that’s 20 cases,” Harris said. “If you look at the crowd, say 2,000 people, you’re looking at a lot of new cases. You’re looking at potentially 4,000 cases. That’s the risk.”

Wrestling and swimming also pose risk of spreading the virus, respectively. In wrestling, in which two athletes are grappling one another with very close physical contact, there’s no way to prevent the spread during competition. Like how wrestling has weigh-ins before games begin, strict screening before the matches is vital as well as thorough sanitation of the mats between games.

“I don’t know that the average layperson understands how physically demanding wrestling is. No. 1, you probably got someone panting with exhaustion. They’re essentially grappling with each other and rolling around the mat for six minutes total,” Yazel said. “You can easily assume a positive wrestling case is going to knock out whoever their practice partner is and the opponent at a meet. There’s no feasible way.

“It’s just going to be something we watch carefully. Really, really take the symptom monitoring seriously. Understand that if we do have a positive sneak through, there’s no way to avoid that exposure.”

Swimming has the least risk, according to Harris and Yazel. There’s natural spacing with lanes. Athletes are mostly under water. Similar to wrestling, however, large invitationals are not uncommon and crowds gathering on swim decks occurs.

Social distancing and wearing of masks by athletes and fans are critical, the health officers said. Making smart, selfless decision is key too. For instance, don’t attend the event if symptoms of COVID-19 arise and watch livestreams instead.

Some fall sports playoffs are still ongoing, and there have already been cancellations due to COVID-19. Rock Creek football team forfeited its first sectional game while Providence and New Albany football teams advanced because their opponents had COVID-19 cases and forfeited the games.

Yazel said “there’s nothing more heartbreaking” than athletes’ season stopping because they need to be quarantined and the “last thing you want is a team that doesn’t get to play because they’re quarantined because their fans packed in too much.”

“For the athletes, keep the circles small. Try to keep the same social group. Make sure you’re around people who are making good decisions and aren’t going to expose you to something that’s going to knock you out for two weeks,” he said.

“From fans’ side of things. COVID fatigue is real. We’re all tired. Bu if you’re a sports fans, follow the rules — social distance, wear masks, no matter where you land opinion wise. Understand that that’s the best way to make sure these kids are able to play sports is by following those rules. Just comply with them — no matter how tired you are, what your thoughts are of it. Put those kids first.”