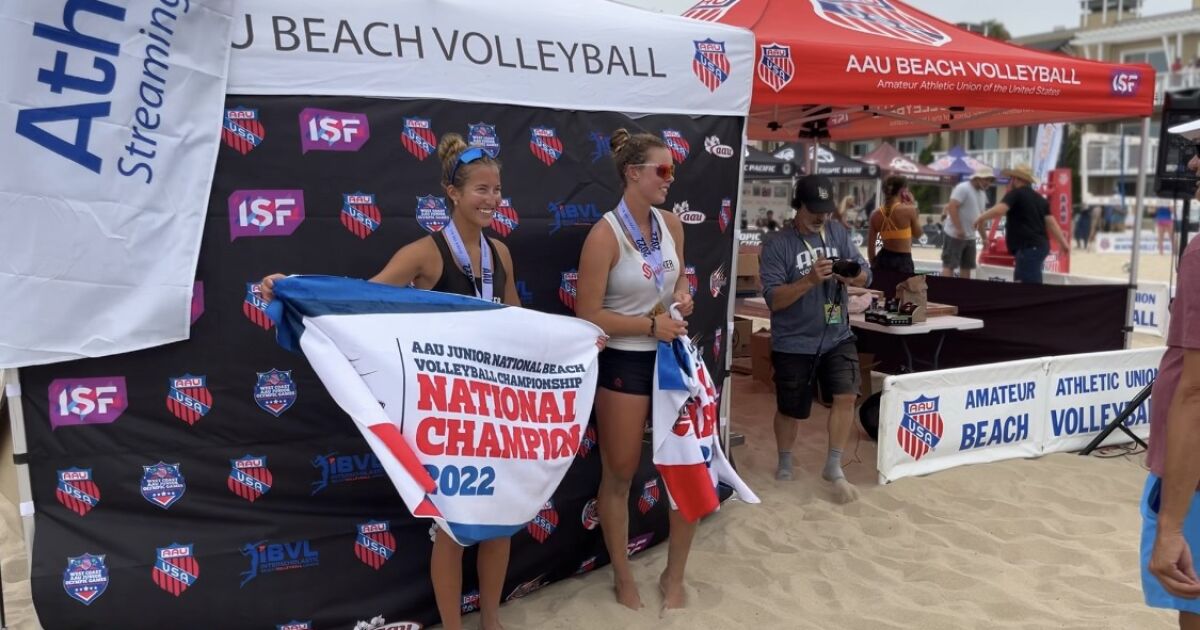 For Cypress High’s Zoey Henson, the girls’ indoor Empire League MVP last season, life in club volleyball was a constant cycle of rehab. Her shoulder was messed up. Her back was in constant pain. She almost tore her meniscus in a tournament. So despite only playing beach volleyball for three years, with indoor Division I offers ahead, she dropped club and switched to the sand.

It’s easier on the joints. You can finish a hard-fought match and splash into the ocean afterward. What’s not to love?

“I can tell that the ratio of girls who are choosing beach over indoor is going to definitely be a lot higher,” Henson said.

Introducing the newest trend in Southern California sports — a wave of beach interest that could have major effects on the future of college volleyball. Across the beach tournament circuit this summer, players like Newport Harbor’s Quinn Perry, Mater Dei’s Grace Hong and Marymount’s Julia Capps all made the choice to step away from strong indoor programs to focus solely on beach.

The interest is reflected in a boom of NCAA beach volleyball participation. As interest in the sport increases and more schools introduce programs, the number of college women’s beach players has grown from 868 in 2016 to 1,485 in 2021, per the NCAA demographics database.

“I think it’s just exciting to a lot of indoor girls that have been playing indoor their entire life … it’s this new shiny toy,” Perry said.

Two of those girls are Huntington Beach’s Haylee LaFontaine and Danielle Sparks, who won a 16U national championship as partners at an AAU tournament this summer. Both are indoor stars: LaFontaine is a dynamic outside hitter with a “robotic arm,” as Pazanti put it, and Sparks is the setter that greases the wheels in the Oilers’ offense. Yet both chose to play for Cal State San Luis Obispo’s beach volleyball program last month.

Three reasons for this wave of interest:

1. More versatility: On the beach, players aren’t stuck in one position — they need to be able to hit, pass, block, serve or dig.

2. More agency: In indoor, as Esperanza’s Clara Stillwell pointed out, players get subbed out by a coach if they make a mistake. In beach, there are no rotations.

3. Less injury risk: Running on the beach might be more exerting physically, but it’s also much less painful diving on grains of sand than smacking a hardwood court.

It all adds up to a growing movement.

It was perhaps impossible for any Southern Section challenger to take on San Diego’s Cathedral High, which has gone undefeated this season and won the annual Dave Mohs tournament at Huntington Beach Edison over L.A. Marymount on Saturday.

The highlight of the afternoon was the Sailors’ back-and-forth semifinal with Huntington Beach, when the Oilers came from down 19-10 in the second set to stun Marymount before falling 16-14 in the third. Marymount coach Cari Klein might have a new program stalwart on her hands in 5-foot-10 freshman Samantha Destler, who put Huntington Beach away in the first set with three late kills and a big block.

San Clemente, meanwhile, staked their claim to a top-10 Southern Section ranking, knocking off Palos Verdes in the first round and then Santa Ana Mater Dei in the quarterfinal.

Bishop Alemany has emerged as a serious threat in the Mission League, beating Studio City Harvard-Westlake in three sets Tuesday. The Warriors are 8-0. Chino Hills, meanwhile, has steamrolled its way to 13-0.

Saugus lost its first match against Orange Lutheran on Saturday, but they’re currently the class of Division IV, holding a 20-1 record.