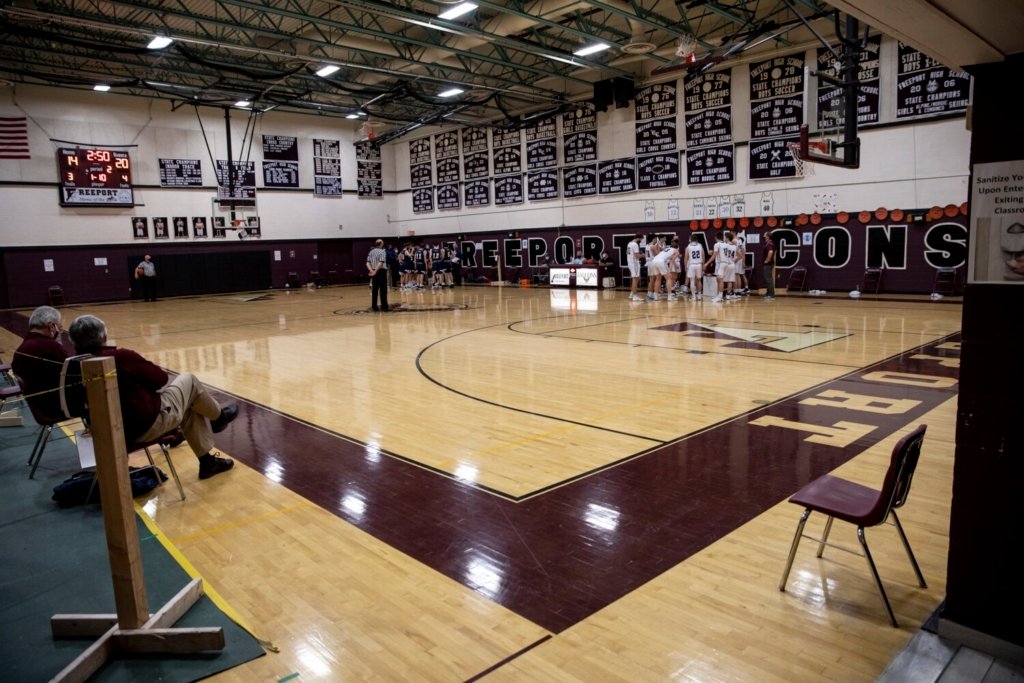 A gym without spectators during the Freeport Yarmouth boys’ basketball game at Freeport. Brianna Soukup/Staff Photographer

Spectators will be limited in indoor sporting events at the Regional School Unit 5 gym this winter due to concerns surrounding COVID-19.

The guidelines, which were determined at Wednesday’s school board meeting, sets limits of six spectators per home player, four spectators per visiting player and a 40-person student-fan section.

Regional School Unit 5 serves Freeport, Pownal and Durham. Basketball is the only sport that is held at the gym in the winter. The gym’s total capacity is around 700.

“We are struggling throughout RSU 5 right now with our COVID cases,” said Superintendent Becky Foley. “We’ve had a lot of discussions around what to do now that we’re moving to indoor sports. We definitely understand wanting to have fans in the stands to be cheered on.”

Resistance to COVID-19 protocols like masking is significantly higher this year compared to last year among students, according to Freeport High School Principal Jen Gulko.

Teachers began keeping track of “chronic offenders” to mask rules, Gulko said, and after two days there were roughly 218 entries on the list. Those on the form will not qualify for the student spectator section.

“This year our staff is beyond exhausted and constantly talking about how difficult it is to feel like they have to police students,” said Gulko. “We’ve tried conversations, we’ve tried parent phone calls … we’ve gone to detentions, we’ve even gone to suspension for chronically refusing and then turning into a situation of disrespect. That’s how far the mask battles have gone this year, and again, that didn’t happen last year.”

Gulko said due to the environment in the school, the administration in the high school is worried about being able to have spectators at sports.

Three students and one parent spoke during the first public comment portion Wednesday’s meeting to advocate for spectators.

“One thing I really looked forward to in prior years was going to sports games, this fall I went to almost every single soccer game for boys to support, and the girls as well,” said Freeport High School senior Robert Landry at the meeting. “This is time that we won’t be able to get back.”

“We all really want this, and I think we deserve a chance,” said Keigan Shea, a senior basketball player at Freeport High School, at the meeting. “If we’re given a chance, I’m sure we won’t let you down.”

Maine health officials reported a new single-day high of 1,460 new cases of COVID-19 on Thursday, according to a report from The Portland Press Herald.

Statewide as of Thursday, 126,833 cases of COVID-19 have been reported alongside 1,357 deaths, according to the Maine Center for Disease Control and Prevention.