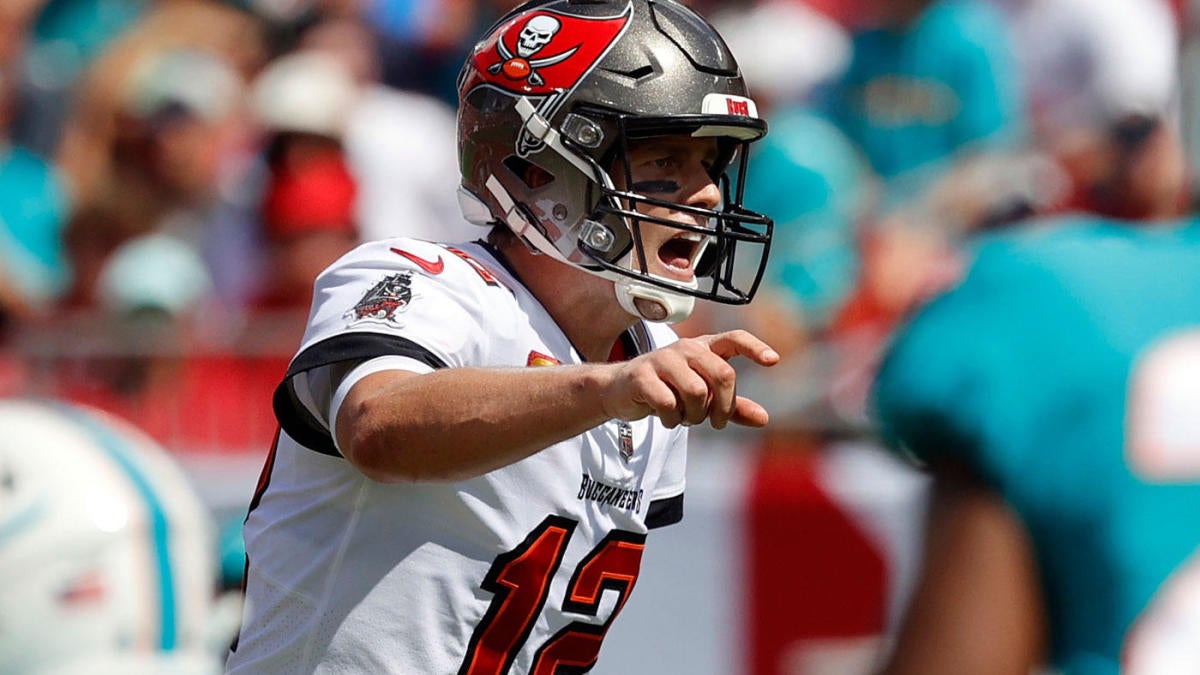 I’m not going to lie to you all; this week looks like it could be a rough one to figure out. And, coming out of that Thursday night game, that’s not exactly what you want to hear. The early weeks of the season are a time when we’re still trying to figure out what everyone’s roles are, and Week 2 has the added complication of giving us a whole bunch of injuries to worry about.

The news is even worse for those of you who started Travis Kelce or JuJu Smith-Schuster, who were pretty disappointing Thursday. It was a disappointing game for Fantasy overall given the star power of these two teams, though the worst part might have been Justin Herbert leaving with an injury.

You can read my full recap of Thursday’s opener in today’s newsletter before we get to all of the big injuries you need to know about with my Week 1 game previews. And if that doesn’t answer all of your lineup questions — and how could it, really? — send them my way at [email protected] with the subject line “#AskFFT” and they’ll get included in my Sunday morning mailbag. Plus, you can catch our YouTube stream Sunday morning at 11:30 EDT where Adam Aizer, Frankl Stampfl and I will be answering all of your lineup questions.

Get ready for Week 2 with all of our preview content here:

And here’s what the rest of today’s newsletter has in store to help you get ready for Week 1:

There’s something to watch in every game on the NFL schedule every week, even if you have to squint to see it sometimes. Here’s a look ahead at every Week 2 game, with some notes on what Vegas is expecting to see, some lineup help and one thing to watch for from each game:

All odds are via Caesars Sportsbook.

The Browns won ugly in Week 1, averaging 4.1 yards per pass attempt and getting a lot of help from a Panthers team that couldn’t snap the ball correctly. Another ugly win could be in the cards this week, as the Jets didn’t look like a vastly improved team. Expect a lot of Nick Chubb and Kareem Hunt once again, with the Jets likely being forced to throw a bunch to try to catch up again.

We got the full Carson Wentz experience last week, and that’s going to make it tough to know what to expect from this Commanders offense week in and week out. He’s just been so inconsistent over the past few years. I am surprised the Lions are favored even at home in this one, and I do wonder if D’Andre Swift’s availability may not swing this line toward Washington if he isn’t able to play. Detroit badly needs his big-play ability.

As I’m writing this on Thursday afternoon around 3 p.m., I have no idea who is going to play for the Buccaneers this week, especially at wide receiver. Chris Godwin is almost certainly out, but Julio Jones, Russell Gage, and Mike Evans are all in varying states of questionable-ness heading into the final day of practice. We’ll hopefully know more by Sunday, but I would start Michael Thomas over anyone in the Bucs passing game, at the very least.

I don’t want to give the Panthers too much credit, because nobody has gone broke underestimating the Matt Rhule-era Panthers. But I do want to say that I think Week 1 will likely go down as the nadir for this offense. The Panthers played just 50 snaps, the second fewest of the week, and had four mishandled snaps and four sacks against a very good Browns front seven. That’s an awful lot of wasted plays, and I don’t think you can expect that trend to continue every week. There are better days ahead for Christian McCaffrey and D.J. Moore.

Both of these offenses looked pretty gross in Week 1. Najee Harris and Diontae Johnson look locked into volume that makes them must-start Fantasy options, but the offense around them looked pretty hapless despite good field position and a lot of opportunities, which is worrisome. And the Patriots might have looked even worse, and with no clear-cut delineation of roles in the backfield, it just kind of looks like a mess. I’m not sure there’s any player on the Patriots offense I’d call a must-start option.

Jonathan Taylor and Michael Pittman dominated touches for the Colts in Week 1, so not much has changed from 2021. On the Jaguars side, lots changed, with new guys Christian Kirk and Zay Jones emerging as Trevor Lawrence’s favorite targets in the opener. Kirk looks like a must-start Fantasy option, and he might be the only one on this offense, given the ambiguity in Jacksonville’s backfield.

Both of these teams won fairly easily in Week 1 without necessarily playing their best offensively, so we still have some questions about what to expect. Would Rashod Bateman have gotten more targets if the Ravens were in a more competitive game? Is J.K. Dobbins ready for his debut? Can Miami’s running game get going? There are a few sure things in these two offenses — Lamar Jackson, Mark Andrews, and Tyreek Hill, and I think Jaylen Waddle — but this week could tell us more about everyone else.

Expectations are still high for this Rams offense, and they’ve certainly earned that benefit of the doubt despite an ugly Week 1 showing. The Bills might just be the best defense in the NFL, so I don’t want to hold that poor showing too much against them. Now, if they struggle against the Falcons … that’s a different question.

I can’t imagine many people saw these two being on opposite ends of the NFC West standings even after one week, but there are extenuating circumstances that make it hard to infer much from either’s Week 1 outcomes. The Seahawks offense fell apart after some nicely scripted drives early on, and given how much those drives relied on a bunch of role players, I’m not sure you can expect that to continue. And on the 49ers side, the weather was so bad during their matchup with the Bears that it was hard to learn much of anything. Which is also to say that the 49ers didn’t answer any of the questions we had about Trey Lance’s accuracy or their ability to sustain multiple Fantasy relevant pass-catchers. Not yet, anyway.

We’ve seen this Cowboys offense without Dak Prescott before, so it’s hard to be excited about anyone here. The Cowboys went from averaging 30-plus points per game with Prescott active in 2020 to just over 21 without him, and that average is inflated by a three-game stretch where they scored 98 points late in the season when they were already out of the playoff race — they scored 105 total in the first seven without Prescott. Maybe Cooper Rush is better than the Andy Dalton/Ben DiNucci/Garrett Gilbert trio, but my expectations are pretty low. I’m not viewing anyone on the Cowboys as a must-start Fantasy option, especially with their offensive line injuries.

The Texans are still in the spot in their rebuild where moral victories count, but I’d be surprised if they managed to hang with the Broncos. Yes, Denver lost to the Seahawks, but that was mostly the result of two fumbles inside of the 5-yard line plus some awful late-game coaching. They averaged 6.8 yards per play and should have put up a lot more than 16 points. They will this week.

Both teams looked a bit sloppy in Week 1, and I’m admittedly surprised to see the Raiders nearly a touchdown favorite here. The Cardinals, admittedly, looked a lot worse than the Raiders, but I expect them to bounce back this week — finding a way to get Marquise Brown more involved early on would surely help.

The Packers had a similarly embarrassing Week 1 loss last season and turned their season around, so you definitely want to make sure you don’t overreact to this one. However, I think it’s less of a sure thing this time around, given the uncertainty surrounding their offensive weapons. Maybe the return of Allen Lazard will make things all better, but I still think the Packers are seriously lacking in playmaking unless Christian Watson can shake off that bad drop and emerge as a go-to guy. That being said, they should be able to handle the Bears pretty easily — Chicago’s defense isn’t as good as it looked in the muddy conditions in Week 1 against the 49ers. I think the Packers will expose that.

The Bills looked like Super Bowl favorites last week, and I suspect they’ll continue to be a dominant force. The Titans are the more interesting team because they came off a No. 1 seed in the AFC by losing to the lowly Giants. What’s interesting is, Ryan Tannehill actually had a pretty great game without A.J. Brown, completing 20 of 33 passes for 266 yards (8.1 Y/A) and two touchdowns. Derrick Henry just couldn’t really get going on the ground, which is going to be the key for this offense. And this is a tough matchup to ask him to do it against.

Apologies to the Titans and Bills, but I’m going to go ahead and say more eyeballs will be on this game, featuring two offenses that looked exactly as explosive as we hoped they would be in Week 1. Justin Jefferson looked uncoverable in the new Vikings offense, and A.J. Brown was similarly dominant in his Eagles debut in Week 1. This game has the third-highest over/under of the week, and we’re expecting fireworks.