Facemate property in Chicopee to be redeveloped for indoor sports facility, brewery, apartments 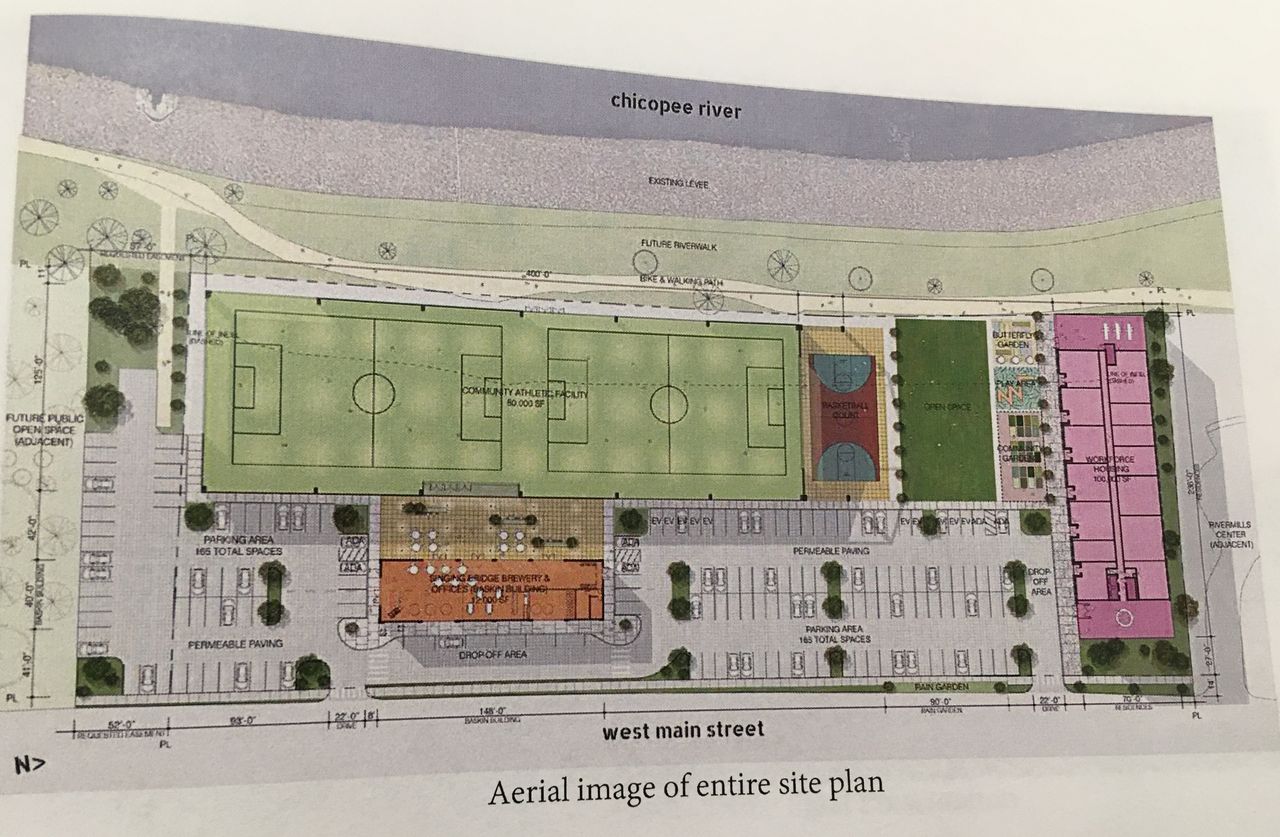 CHICOPEE — A New York developer has been selected to build a 102-unit apartment building, a multi-sport indoor facility and a brewery and restaurant on a four-acre parcel of land that once was home to the Facemate factory complex.

City officials announced on Wednesday that Singing Bridge, LLC. was chosen as the preferred developer for the 4.05-acre site on West Main Street, after a long negotiating process that began in January 2020 when the city requested proposals from developers interested in building on the land.

Two proposals were submitted and Singing Bridge LLC. met all the criteria, including having plans to reuse the only building left at the site. The company will pay $920,000 for the property and is expected to invest nearly $40 million in the project, said Marie Laflamme, the city treasurer and a member of the committee of city officials who reviewed the proposals.

“This is a fantastic opportunity to bring a diverse set of uses to a site that already has so many innate qualities; especially being adjacent to the Chicopee River,” Graham said in a written statement. “It’s also exciting to work with a forward-looking municipality like Chicopee who is planning for the future by enhancing the built environment now.”

The project is expected to create 52 jobs, the statement said.

This isn’t the only Western Massachusetts project the Brooklyn-based Brisa Developer LLC, of which Graham is a managing member, is involved in. The company released a letter of intent in January to purchase two strip club buildings in Springfield — the 5th Alarm at 77 Worthington St and the nearby Center Stage property at 265-267 Dwight St. Brisa has since dropped its plans to buy the Worthington Street parcel, but Graham said in March that he is still pursuing the Dwight Street site, where he has proposed a small supermarket and deli.

Graham also has local ties: He is a graduate of the University of Massachusetts in Amherst and Wilbraham & Monson Academy.

The Chicopee plan calls for the multi-sport facility to measure about 54,000 square feet. The 102-apartment building will be five stories. A key part of the proposal was to have a developer who would reuse the former Baskin warehouse building, which is considered historic, Laflamme said.

At about 10,000 square feet, the building is essentially a shell with no heat. Residents of the apartment complex and those who use the indoor sports facility are expected to be among the customers of the eatery, Laflamme said.

“We are excited by this proposal from the Singing Bridge partnership as it represents a significant, transformational investment in this tax title parcel returning productive uses to the site and allowing it to support the city’s tax base once again,” she said.

The project still has to be reviewed by the Planning Board and Conservation Commission. Because the proposed complex is located in a Mill Conversion and Commercial Overlay district, which allows the reuse of abandoned industrial and commercial properties, the developer must also receive a special permit from the City Council.

“It has been 11 years of brownfields cleanup and investment,” said Mayor John L. Vieau, calling the project a “milestone.”

He thanked state and federal partners, including the Environmental Protection Agency and MassDevelopment. He also gave a special shoutout to City Planner Lee Pouliot who was key in acquiring more than $4 million in state and federal grants for the cleanup.

“Generations of Chicopee residents have intimate memories and connections to the RiverMills sites and we are excited that future generations will again be able to leave their marks on these former industrial properties,” Vieau said.

When the city acquired the abandoned Uniroyal and Facemate factory complexes off West Main and Oak streets in 2010 for tax title after a protracted court battle, the highly-contaminated land and properties was considered to have a negative value of $22 million. The 20 acres of property at Facemate alone had seven buildings, six of which were dilapidated, he said.

Cleanup continues on the Uniroyal property but this is the last parcel of property to be redeveloped on the Facemate site.

The first piece of Facemate land to be cleaned now houses the RiverMills Senior Center and the second was sold to DS Development which created the about $25 million 95-unit RiverMills Assisted Living Center at Chicopee Falls. The complex opened in 2019.