The Inter-Mountain photos by Edgar Kelley
A section of old bleachers have been removed at the field next to Elkins High School, which will be the new home for the Tiger football team.

ELKINS — Work began this week to create a new football stadium at Elkins High School, and an official said the project will be complete in time for the Tigers’ first home game on Oct. 1.

The new stadium project at Elkins High School officially got off the ground last week when athletic director Ross Ware met with a Stadium Solutions official to go over final plans for the installation of the bleachers at EHS.

“I met with project manager Cory Roenigk last Thursday and we approved the drawings for the bleachers themselves,” Ware told The Inter-Mountain Tuesday. “We picked out the color of the press box, some of the interior stuff, and other things having to do with the bleachers.”

This week Stadium Solutions, a Pittsburgh firm which will oversee all phases of the project including design, engineering and construction, returned to the new field — located beside Elkins High School — and a crew was hard at work removing the old bleachers on Tuesday.

Most of that section of seats is being moved to one end of the field, behind what will be one of the endzones. They will remain there for EHS soccer spectators to sit in for games this summer while the construction is ongoing. The baseball field at EHS will also receive a portion of the old bleachers. 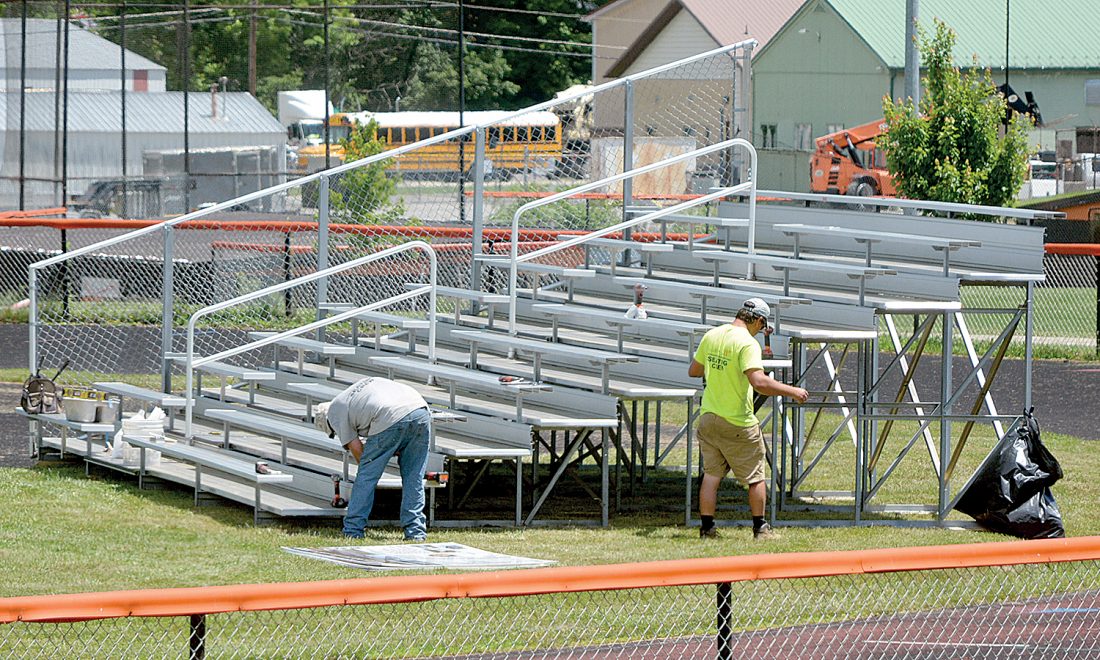 Employees with Stadium Solutions work on some of the old bleachers that have been moved to one end of the field. That section of the bleachers will be used for spectators when soccer season starts, and for the EHS band during football contests.

“They (Stadium Solutions) had some free time this week, so they came up to start working on the old bleachers that we are relocating,” Ware said. “We want to be able to have them ready when soccer season starts at the end of August. Those will also be used for the band during football games.”

Ware said the bleacher project, which is Phase 1 of the revamping of the entire outdoor sports facilities at the school, will not be ready for the start of the football season on Aug. 27.

“We’ve already got our first two games moved that are scheduled to be home,” Ware said. “The bleachers are not going to be done in time for those games, but they will be ready by Oct. 1 and that will be our first home game against Grafton. And that will actually be our homecoming game as well.”

Ware said the seating capacity for the new stadium will be 2,200 once the project is complete. That is just 200 seats less than Wimer Stadium’s capacity.

“The field is not going to be playoff eligible in the beginning, but when you’re looking at $300 per seat, we can’t build an additional 3,000 seats right away to make that happen,” Ware said. “Phase 1 was to have some seats, Phase 2 is to put down turf and track, and then later down the road we are hoping to add more bleachers.”

Ware said if the money is available, the extra seating would be added during Phase 2 of the project.

When asked how Phase 2 of the project was coming along, Ware replied, “There are still a lot of question marks, but the board office has a meeting with the state board on Monday to present a plan for all the federal money we received. If that works out well for us, there’s going to be some money freed up at the board office to help do the next phase. So the money is a big question mark right now.”

Ware said seeking private donors is not out of the question to help with the second phase.

“I think we can get some help from some people later down the road, but I’m hoping to be able to do that when we go to start building new restrooms, concession stands and things like that,” he said.

On May 4, the Randolph County Board of Education voted to approve a resolution enabling the county school system to enter into a lease purchase agreement with Citizens Bank of West Virginia, to provide funding for new bleachers to be built for EHS athletic programs, including football, baseball and band. As part of the bleacher project, county officials will be relocating the home of EHS football from Wimer Stadium to Elkins High School’s current location at Kennedy Drive off the Beverly Pike Five-lane.

Stadium Solutions gave an estimate of approximately $957,000 to complete outdoor bleacher projects at the facilities. The lease purchase with Citizens Bank will be for a 10-year period for up to $1,140,000. The payments will be $128,720.43 per year.


CHARLESTON — Despite the failure of a procedural vote Wednesday for a bipartisan infrastructure framework, …

ELKINS — Two Elkins residents won prizes Wednesday in the “Do it for Babydog: Save a life, Change your life” …

OUTDOORS: Plenty of options for outdoor sports even in the wet weather