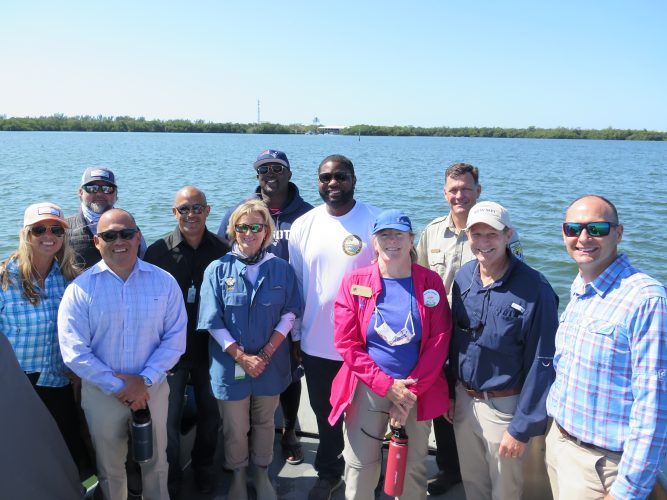 The Sanibel & Captiva Islands Chamber of Commerce hosted U.S. Rep. Byron Donalds for Florida’s 19th District on April 5 to meet with community organization and business leaders on the topic of water-quality legislation. The Sanibel-Captiva Conservation Foundation provided a boat tour of Tarpon Bay for a small delegation. Following that, Thistle Lodge hosted a round-table luncheon for a larger group.

Donalds expressed a commitment to listening to questions and issues about water quality and to represent those concerns in Washington.

“It’s the number one thing to make sure I’m doing,” he said. “The government does need to fix our waterways, because they created the problem.”

Mayor Holly Smith expressed confidence in the congressman to stick with the issue for the long-term.

“You are going to be that leader,” she said.

Donalds’ team reiterated the importance of water quality on the economy and its willingness to understand the issue and make it a priority.

“The tourism industry got hit the hardest in the last 12 months,” chamber President John Lai said referring to economic effects of the pandemic. “We feel like we’re just turning the corner now. The biggest thing that can derail us right now would be a repeat of 2018’s red tide and blue-green algae event.”

“I’m proud of this organization,” island resident and South Florida Water Management District Governing Board Chairman Chauncy Goss said of the chamber. “A meeting like this wouldn’t have taken place 15 years ago.”