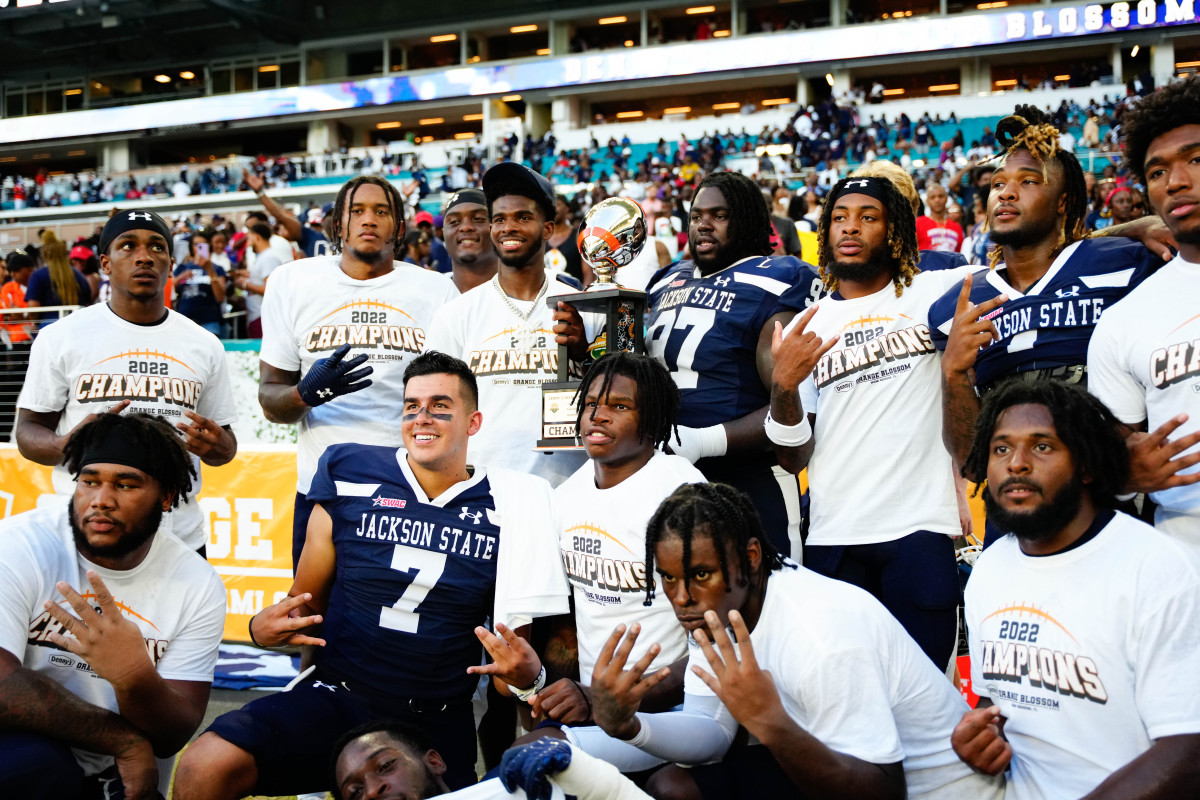 Just before the Jackson State football team entered Hard Rock Stadium through a tunnel next to the west end zone—to the tune of the program’s iconic theme song “Get Ready” played by The Sonic Boom of the South—Tigers head coach Deion Sanders looked his players in the eyes and set the mood for the 2022 Orange Blossom Classic.

“Adversity is going to come. Check it at the door,” Sanders said.

Following the disappointing loss in the ’21 Celebration Bowl, JSU’s primary theme during the offseason was dominance—in every aspect of the game. But to fulfill that mission, Sanders had to make adjustments, bringing in new additions to his coaching staff as well as adding another stellar recruiting class of players to address the team’s biggest weaknesses such as its offensive line.

Even with the structural changes, the JSU team that dominated Florida A&M in one of the most anticipated HBCU games of the season was a program motivated far beyond conquering the Rattlers on the gridiron. For 60 minutes, Tigers players and coaches used the game as the ultimate escape from reality: a devastating water crisis crippling the city of Jackson, leaving more than 160,000 residents without running water over the last week.

But in the face of a challenge much bigger than reading the right checkdown on a formation or scoring touchdowns, Jackson State provided a worthy escape, delivering with a 59–3 drubbing of the Rattlers. The Tigers’ defense, a unit that finished second among FCS programs in ’21, was everywhere Sunday.

FAMU’s first four of its 14 total offensive drives in the game resulted in four punts and an average net gain of seven yards. Travis Hunter, JSU’s highly touted two-way sensation, was targeted twice in the first quarter by quarterback Jeremy Moussa. Both times, the No. 1 player in the SI99 rankings delivered with top-notch plays, including a leaping effort for a deflection on the right sideline against one of the Rattlers’ top-tier receivers. But despite Hunter’s dominating performance, he supposedly wasn’t close to his optimal level, more like 60 percent. “But a 60 percent Travis Hunter is like a 100 percent of somebody else,” Sanders added after the game.

Shedeur Sanders, the reigning FCS Jerry Rice National Freshman of the Year, went a perfect 17-of-17 before recording his first incomplete pass of the game in the second quarter. FAMU coach Willie Simmons told reporters Monday that part of the Rattlers’ assignment was to ensure Shedeur was unable to “carve up” their secondary.

Despite the Rattlers’ efforts Shedeur delivered a master class in picking apart a defense, finishing with 323 yards on 29-of-33 passes and connecting with 11 different JSU receivers for a career-high five touchdowns (against a team that limited him to a one-yard rushing touchdown in the last’s year OBC). Sitting next to his father after the game, the sophomore quarterback credited the Tigers’ new offensive coordinator, Brett Bartolone, and a revamped offensive line with paving the way to his success. “Coach Brett … he was ready for this game as we all were,” he said.

The Tigers’ defense also made sure that FAMU’s offense never caught a whiff of confidence or rhythm: The Rattlers’ final 10 offensive possessions in the game included seven punts, two fumbles, a field goal, two interceptions and two turnover on downs for a unit that crossed midfield only three times. Xavier Smith, another standout Rattlers receiver, was quiet as he sat at the table in the postgame news conference. But even despite the utter blowout, Smith remained positive about the direction that the team was headed. “You’ll never see FAMU play this type of football ever again; I can promise you that,” he said.

Moussa, the Vanderbilt transfer quarterback who lit up North Carolina’s secondary last week for 279 yards off 28-of-39 passes and two touchdowns, was never comfortable against Jackson State. He was limited to a measly 102 passing yards and had one interception while being sacked three times. When last year’s starter, Rasean McKay, entered the game in an effort to bring some offensive relief, it resulted in a fumble in the first half and an interception nearly halfway through the fourth quarter.

But like the Tigers, FAMU had its own slice of adversity entering Sunday’s game. Before the Rattlers’ season opener against North Carolina, 26 players on the team were deemed ineligible due to NCAA compliance issues. After a week of constant questions, coupled with more than 80 players penning a letter to FAMU president Larry Robinson regarding the issue, 18 of the 26 players returned for Sunday’s game. Of those included two of FAMU’s top defenders: the reigning Buck Buchanan award winner and top HBCU NFL prospect Isaiah Land (who had one sack in the first half of the game) as well as preseason All-SWAC defender BJ Bohler.

However, the two’s impact was limited as JSU posted 471 yards of total offense compared to FAMU’s 155. Simmons was quick to take the blame.

“This is, by far, my worst coaching job as a head football coach,” Simmons said after the game. “This is an embarrassing day for us all. …Today’s game was not indicative of the type of team we have.”

But while the Tigers have lifted the Orange Blossom Classic trophy once again, Jackson State returns to reality, going back to a city that has slowly begun restoring water to areas affected by the water crisis. According to the Clarion Ledger, city officials stated residents should have “increased water pressure” due to the increased storage levels in water tanks at the O.B. Curtis Water Treatment Plant. What hopes to be the start of some small relief to the city’s water affairs comes after Mississippi’s governor Tate Reeves declared a state of emergency regarding the crisis.

As the city continues to navigate the ongoing struggles and all JSU students—which includes college athletes—undergo virtual learning until Sept. 8, Sanders is focused on preparing his players for their next test against Tennessee State in the Southern Heritage Classic in Memphis. With a shorter week to prepare, the process won’t be easy—or cheap. The program will still need to keep players in hotels, which costs roughly “$15,000 a night,” find food to feed the athletes as well ensure all practice clothes, uniforms and equipment are in tip-top shape.

So, while claiming victory in their first game, the Tigers’ adversity—one that is out of their hands—remains. However, JSU is no stranger to challenge. More personally for Sanders, who lost his grandmother before Sunday’s game, he must deal with losing the woman he knew as the “patriarch of his family,” a “God-fearing woman” who was everything to him.

But with the Tigers’ profound performance, Sanders hopes the team can be a support system for the city, alumni and JSU fans alike as the program chases another winning season amid the city’s ongoing water crisis and infrastructural woes that date back five decades.