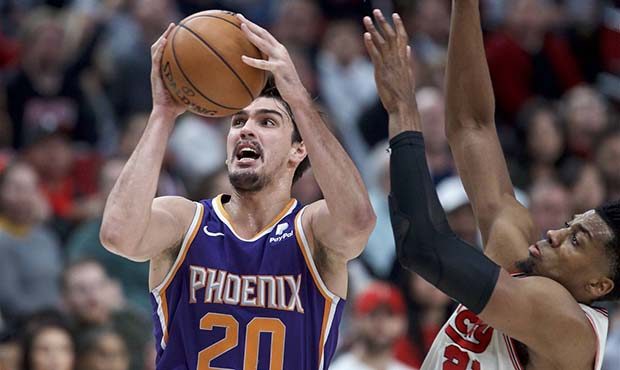 Phoenix Suns big man Dario Saric missed all of the team’s four preseason games due to soreness in his right quad and it sounds like there’s a chance he could be out longer.

“I’m getting there. I think I’ll be ready, let’s say maybe in a week or something like that,” he said. “It’s hard to say.”

Williams has reiterated after the Suns’ last couple of practices that Saric’s status is “day-to-day” and that anything beyond that is a wait-and-see situation. He said Monday that Saric “went through a lot” in practice and they’re going to see how his body responds to that.

Saric said the injury occurred when he was back home in Croatia before he returned to the United States for the start of training camp in early December. He had an MRI and was told they’d be taking it easy with him early on.

Last season for the Suns, Saric had a resurgence in the bubble as a small-ball 5. He averaged 10.0 points, 6.2 rebounds and 1.9 assists for the season. Phoenix signed him to a three-year, $27 million deal in the offseason.

The loss of Saric for any games would be significant, as both he and Cam Johnson are the two most important reserves for Phoenix. The duo will be interchangeable pieces with the starting five and there’s shallow depth behind them.

In the preseason, Williams has played Damian Jones as the team’s backup 5 and first-round pick Jalen Smith as his frontcourt mate. Through four seasons, Jones has yet to prove he should be trusted with a rotation role while Smith has very much looked the part of a rookie trying to adjust to the speed of the NBA.

Williams could push the minutes up for Mikal Bridges, Jae Crowder and Johnson at the two forward spots, leaving Jones or Smith to come in for Deandre Ayton. Three-guard lineups could be deployed as well. Langston Galloway has been used as a smaller 3 in the past and has proven himself thus far as a shooter off the bench.