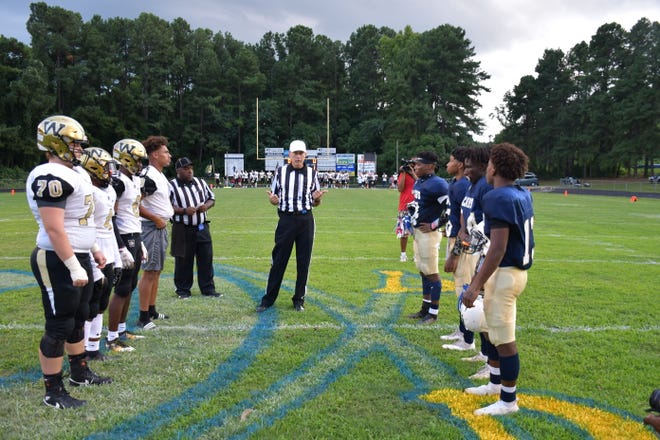 A stream of talent has poured through the Air Cavs Sports Club for 3½ decades now.

For a long stretch in Alamance County football history, those players built up the Cummings High School football program into a perennial state championship contender.

And now, as the Cavaliers attempt to recapture some of the success previous Cummings teams discovered, the influence from the Air Cavs program is still strong.

For the first time since 2011, the Cummings High School football team defeated Williams High School on a football field Friday night. Afterwards, a handful of current Cavaliers players dedicated the victory to Connell Graham, one of the Air Cavs founders, who passed away last month.

“We try to make them understand that football is a privilege that your parents give you,” Graham told the Times-News in 2019. “It’s something they give you because you’ve been doing something good, not because they want you to be a star. If you abuse that privilege, you can no longer play.”

This time, the privilege was all theirs.

A Cummings team with numerous players who grew up playing in the Air Cavs organization, honored him on Friday night with their play — just like how Graham had taught them.

“It really means a lot,” Cavaliers senior receiver Dylantae James said. “We just lost a great soul in Coach Connell. He started the Air Cavs. We’ve been playing Air Cavs since we was little, so this really means a lot. We really wanted to win this for him.”

The Cavaliers held off the visiting Bulldogs by a final score of 32-25 as junior Kris Krawley stuffed a fourth-and-short play in the final minute to force a turnover on downs and secure the non-conference victory.

“He’s what started it for most of the kids who play for Cummings,” Cavaliers senior quarterback Tylek Oliver said. “This game was for him. And, I just know he’s up there (in heaven) happy.”

Cummings players said they believed this victory against a higher classification program represents an announcement of their arrival as a legitimate team. After years of struggling and eight straight seasons with a record of .500 or below (2012-20), this team hopes to capture something similar of the Cummings teams of old, they said.

“It’s a big rivalry,” James said. “We knew the stands were going to be packed, so we just wanted to put on a show for the fans.”

The bleachers at Cummings filled up with spectators, the vast majority of which stuck around, even after a roughly two-hour lightning delay.

Take advantage of our $1 for 6 months sale on digital subscriptions. For special offers, click here.

Krawley was one of several Cavaliers (1-0) hunched over, gasping for air and mustering any last bit of energy possible during a timeout before the decisive fourth-down play.

“To be honest, I was just tired. I thought I was going to give out,” Krawley said. “The team just kept pushing me. He just came to my side and I made the tackle.”

Cummings coach David Grimm said: “He said he didn’t have much left. We said, ‘Come on, Kris, you’ve got one play for us,’ and sure enough, he came and rose to the occasion. He made a big stop on that fourth-down play.”

A fourth-quarter touchdown pass from Williams quarterback Jaelan Brown was followed by a successful onside kick attempt. Then, Kylei Richmond scored his second rushing touchdown of the game to cut the Bulldogs (0-1) deficit to seven with 6½ minutes remaining.

Ultimately, the Bulldogs’ surge was a little too late, after falling into a 19-point hole in the third quarter.

“I told our guys at the end of the game that our standards are higher than what we saw in the first and second quarter,” Williams first-year coach Patrick Stokes said. “I told them that at halftime. I tried to encourage them a little bit at halftime, but I did tell them at the end of the game, I’m proud of the resiliency and determination we showed in the third and fourth. But, if we’d had that resiliency from the beginning, it would probably be a different outcome. Taking nothing away from Cummings; they’ve got a phenomenal team.”

Cummings sophomore Jonathan Paylor broke away from several would-be tacklers on the game’s first play from scrimmage, reversing field and bolting by the Bulldogs defense for a 55-yard rushing touchdown. He hauled in a 41-yard touchdown reception from Oliver in the second quarter to give the Cavaliers a 12-0 lead.

His receiving touchdown came just minutes after a couple of uncharacteristic mistakes. Paylor fumbled the ball to the Bulldogs and then later muffed a punt that Williams recovered.

“You have to have a short-term memory,” Paylor said. “I never drop a ball on punts. That was in my head. Next game, I’ll step it up.”

Oliver finished with two touchdown runs to go along with a passing score. He racked up 178 yards and one interception in the air and 75 yards in the run game. Paylor finished with 108 rushing yards on nine carries and seven catches for 121 yards.

Marione Enoch’s 7-yard touchdown run in the third put the Cavaliers in front 32-13.

Nasir Price registered four catches for 97 yards for the Bulldogs. Brown finished with 121 passing yards and one interception to Cummings defensive back Elijah Collins. Richmond racked up 90 rushing yards on 11 carries.

Izayah Ramsey came down with a second-quarter interception for Williams.

“Vols 21: Bring on the Heup” Air Times Begin This Weekend