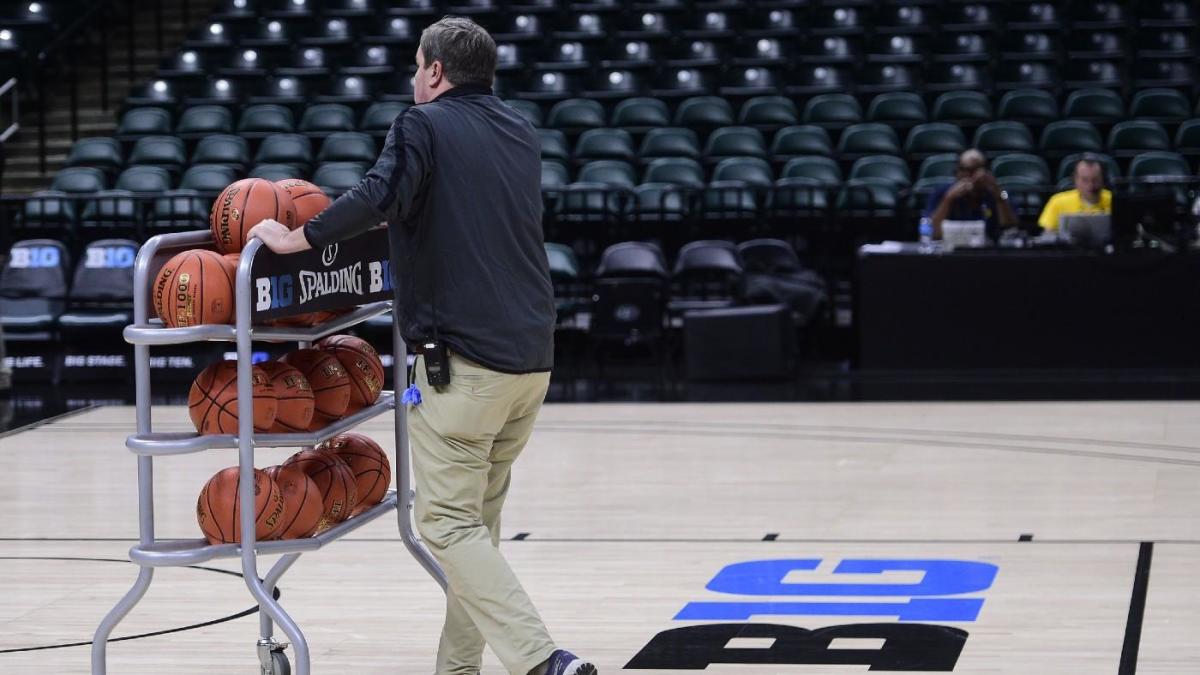 There is an issue looming over college athletics that might be even more pressing than the conundrum over conference tournaments that CBS Sports also reported on Thursday. Multiple conference commissioners and athletic directors told CBS Sports in the past week-plus that there is a growing sense of nervousness over the stability of the college basketball season — and all winter collegiate sports — for the next few weeks.

The reasons for this are two-fold, both of course based around the ominous nature of the coronavirus. The first has to do with the new President of the United States. With Joe Biden now holding office, high-ranking NCAA officials are in wait-and-see mode about monitoring case counts across the country and bracing for the possibility of federal shutdowns that could impact dozens if not hundreds of schools — prompting a midseason pause in the process.

“My answer is yes, yes and yes,” A-10 commissioner Bernadette McGlade said when asked if she held these concerns. “I think the anxiety level is high for myself and a lot of my colleagues and a lot of coaches. It’s a constant — everyone is just holding their breath.”

The NCAA releasing its dates for the men’s basketball tournament this week is not making matters easier. While that new release projects confidence, it also poses a rigid scheduling problem if college basketball were induced into a February freeze.

“Obviously the vaccines aren’t getting injected as quickly as they can, the virus levels are still spiking all over the country, it’s one of those concerns that’s out there,” Big West commissioner Dan Butterly told me. “England just went into a lockdown to help with the vaccination process. New Zealand and Australia did it, and it seemed to help kill the virus there. Biden hasn’t come out with his plan yet — he’s talking about masking for 100 days, but he hasn’t come out with a full plan yet — and there’s an unease in college sports about what’s going to happen as we get to February.”

“There’s an unease in college sports about what’s going to happen as we get to February.”

With vaccinations still not happening at a satisfactory pace and with coronavirus cases still at unsettlingly high rates nationally, the issue is compounded by a second facet, which coaches and commissioners said could be just as threatening: everyday students across the country have returned to college campuses. This has administrators gripping.

“There has been concern, there is concern and will be concern going forward,” Big Sky commissioner Tom Wistrcill said. “The virus has been really unpredictable. It’s been hard for us to manage as a country, it’s hard for our level, both from getting students back to classes and getting into school, and for basketball teams to travel around and get games in. Everything I’ve tried to guess and plan out about the virus hasn’t worked. It’s really hard to sit here today on the 19th of January and say, ‘I’ve got a really good feeling about this, this and this going forward.'”

From Nov. 25 until this past week, college basketball operated without the general student body on campuses nationwide. Despite this luxury, the sport still was seeing approximately 20{066dbc63777e5ed549f406789d72fdeebd77a32711d57f7b38ff2b35c4ba2a42} of its games postponed or canceled on a weekly basis. Is that number destined to balloon? At the top of the sport more than 10 games involving ranked teams have been nixed this week. McGlade, who in addition to being a commissioner is also on the men’s basketball selection committee, has been communicating perspective in the past month-plus, as these concerns have swirled around the NCAA’s membership.

“We all have to be really mindful of the really big picture,” she said. “I think there’s a possibility — I hope a remote possibility — that there could be decisions made that are well out of the control of higher education, intercollegiate athletics and the NCAA that could put a pause on what we’re doing in sports right now. I do hope it’s a remote possibility. If there’s, like we’ve seen in other countries, if there’s an immediate shutdown for an extended period of time, there are far greater ramifications than the basketball season, whether it’s the economy, whether it’s healthcare, whether it’s the ability for people literally, for families to survive and sustain themselves economically. I think those would be far greater, gosh, devastating results of a national so-to-speak shutdown. I don’t think it’s completely out of the realm.”

Wistrcill said February is going to be so critical to his league and others because the time is just about up to push back games without real consequence. It’s no longer postponement season; it’s now cancellations. Big decisions will have to be made, and depending on the severity of the coronavirus situation at the end of February, how many leagues will feel comfortable bringing their teams together for league tournaments?

“We’ve thrown ‘fair’ out the window this year. There is no such thing because I can’t define it,” Wistrcill said. “We’re very fortunate to be playing basketball at all in the middle of a pandemic.”

It’s still considered more likely than not that the season continues apace, but no one really knows. In speaking with commissioners and athletic directors, I do get the sense that if an in-season halt did occur and it were substantial enough, the NCAA is prepared to push back the NCAA Tournament into April or May if possible. It can’t afford to lose it, and would look to play it in any way and at any time in the spring before not playing it at all. Not having an NCAA Tournament for a second consecutive year would be ruinous for college athletics as we know it.

Eye on College Basketball is the sport’s most popular podcast. Listen and subscribe now!

We just passed the halfway point of the season. Despite a lower game count than usual, we can still do a temperature check on two of the biggest awards in college hoops. So with that in mind, here are my top 10 candidates for National Player of the Year and National Coach of the Year.

Each week I highlight reader questions, so find me on Twitter and @ me with whatever you’d like answered.

Yes, Dan Gavitt told me this week that the NCAA is still planning on holding a National Invitation Tournament, which has existed since 1938. What’s not yet fully determined is if the NIT field will be 32 teams (as usual) and if Madison Square Garden will able to serve as host (as usual). There’s a lot to be figured out, though. One could easily make the case there’s no real point in holding a secondary afterthought of a tournament in a pandemic that needlessly puts unpaid amateur athletes in harm’s way. Beyond that, the NIT will almost certainly see multiple teams opt out, meaning that the field will be even more watered down than usual.

This year’s NCAA Tournament will have second round games played on a Sunday and Monday (March 21 and 22), and so yes, I do expect there will be daytime basketball on that Monday, which will make for a nice bonus. This is a blind guess, but I’m thinking four games tip before 5 p.m. ET and then the other four will be in the primetime windows at night.

Yes, states like California and Florida have already approved name, image and likeness legislation. Florida’s goes into effect this summer. California’s does in 2022. The NCAA tabling its NIL legislation earlier this month was done because there is concern that any current proposals for NIL could wind up falling short, depending on how the Supreme Court views the Alston case later this year — and depending on if Congress enacts player-friendly compensation-allowance legislation.

Yeah, yeesh. On Wednesday night Colorado lost 84-80 at Washington, which entered the game 1-11. I reckon that loss is more than a single seed-line bump. That’s a Quad 3 defeat and it dropped the Buffs from ninth to 17th in the NET overnight.

• The big news from Thursday night: Larry Scott’s ouster at the Pac-12. He’ll be leaving this summer. The list of candidates out there already includes Stanford AD Bernard Muir, Arizona State AD Ray Anderson, Pac-12 associate commissioner Jamie Zaninovich, WCC commissioner Gloria Nevarez, Ohio State AD Gene Smith.
• If it can play in the NCAA Tournament, look out for Siena as a real threat to be a Cinderella. The Saints have won a school-record 16 straight dating back to last season and might not lose more than two games pre-NCAAs.
• Another, more familiar Cinderella: Have you seen Loyola Chicago’s standing in the metrics? The Ramblers are 24th at KenPom and 30th at Torvik. Huge road games await this weekend at Bradley.
• Florida might be on its way to the weirdest résumé in college basketball. The Gators are 7-4 and just beat Tennessee by 26 points despite not having Colin Castleton, Keyontae Johnson and Scottie Lewis.
• A good read for anyone who loves to dive into numbers and trends and see what they might mean: Ken Pomeroy on team free throw percentage.
• I’m told the Atlantic 10 will be announcing which school is hosting its league championship by the end of next week. Conference moved out of Barclays Center for this year.
• Undefeated teams left in college hoops: 15-0 Winthrop, 14-0 Gonzaga, 13-0 Baylor, 13-0 Drake, 6-0 Siena, 3-0 Alabama A&M.
• Winless teams: 0-13 South Carolina State, 0-12 Mississippi Valley State, 0-11 Idaho, 0-9 Delaware State, 0-9 Chicago State (season over), 0-2 Loyola Maryland, 0-2 American.
• Look at what our Kyle Boone pulled. This is Alabama’s win over LSU, which maximized efficient basketball. Only 3-pointers and short-range shots. If Nate Oats can successfully adopt this going forward, it will be one of the bigger stories by March. The NBA-ing of college hoops continues.