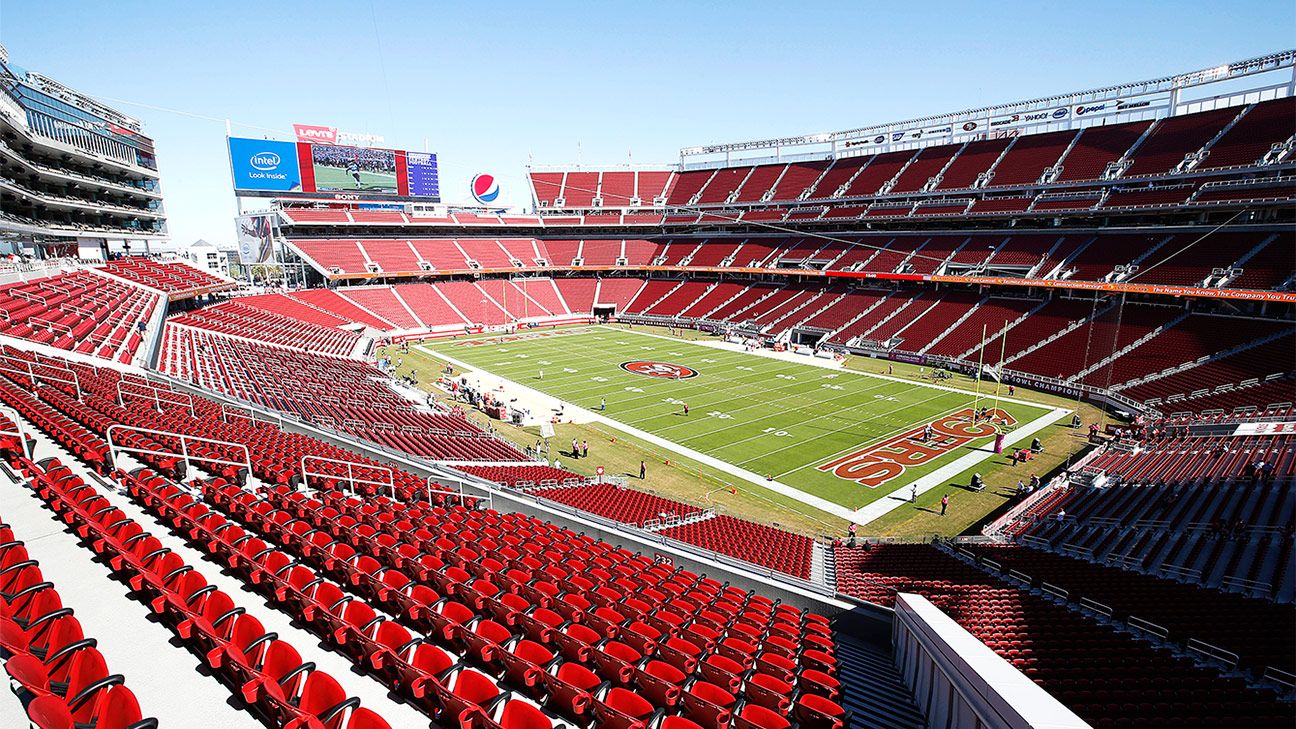 SANTA CLARA, Calif. — For at least the next three weeks, the San Francisco 49ers are a team without a home.

That’s because Santa Clara County, home of the 49ers and Levi’s Stadium, issued enhanced COVID-19 guidelines for professional, collegiate and youth sports on Saturday afternoon that effectively put a three-week ban on any contact sports taking place in the county.

Saturday’s announcement comes in the wake of rising COVID-19 cases in California and the Bay Area.

The ban and other related guidelines, including a 14-day quarantine for anyone traveling to the county from more than 150 miles away, are set to begin Monday.

“All recreational activities that involve physical contact or close proximity to persons outside one’s household, including all contact sports, will be temporarily prohibited,” the order said. “People can continue to engage in outdoor athletics and recreation where social distancing can be maintained at all times.”

The 49ers currently have two home games scheduled within that three-week window, Dec. 7 against the Buffalo Bills on Monday Night Football and Dec. 13 against the Washington Football Team. Under the rules, the team would need to find an alternate place to play those games as well as to hold its practices.

“We are aware of the Santa Clara County Public Health Department’s emergency directive,” the 49ers said in a statement. “We are working with the NFL and our partners on operational plans and will share details as they are confirmed.”

The 49ers had been working with the league on NFL-ready stadium contingencies for this possibility since before the season began, a league source told ESPN.

At the time, the 49ers had considered potential out-of-state alternatives for games in case they didn’t get cleared to play at home initially. Two of those possibilities were Texas and Arizona. Both the Cowboys and Cardinals have no day-of-game scheduling conflicts with the Niners’ remaining home games and both of those teams are set to host the Niners for two of their remaining road games before the season ends.

The Niners’ preference would be to find a local option for practice so players won’t have to be separated from families during the holidays, but all options, including those involving moving their entire operation out of state, remain on the table.

James Williams, counsel for Santa Clara County, made it clear in a news briefing that nobody is exempt from the new rules.

“[This] will temporarily suspend activities that require direct physical contact or interaction in Santa Clara,” Williams said. “So, that means that for those teams, they will not be able to play games or have practices where they have direct contact within the county.”

Williams said the 49ers and other teams in the county have been in contact with county officials. The team had no comment early Saturday afternoon but is in the process of gathering information to understand what comes next and potential options to continue its season.

While there are some obvious potential alternative sites for games and practices in the Bay Area, it is not yet known how viable those are or whether further shutdowns will be forthcoming in those counties.

Stanford said in a statement that it is aware of Santa Clara County’s announcement and remains “in close communication with University and County officials at this time on appropriate next steps.”

“I am gravely concerned by the continuing surge in COVID-19 cases and hospitalizations,” Santa Clara County Health Officer Dr. Sara Cody said in a statement. “The number of patients hospitalized with COVID-19 in our county has doubled in just the past couple of weeks, and we are at risk of exceeding our hospital capacity very soon if current trends continue.

“During this critical time of surging COVID-19 transmission in our community, I urge every resident to exercise caution and to the greatest extent possible, minimize contact with anyone outside of your immediate household.”