Concrete being poured for indoor sports fieldhouse at NexusPark site 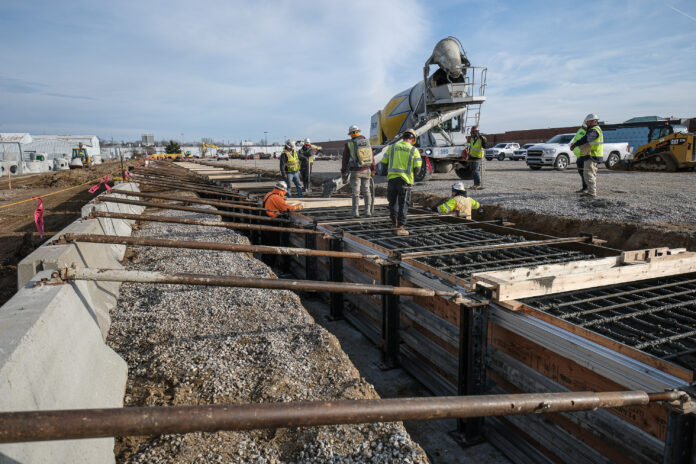 COLUMBUS, Ind. — Construction crews have started pouring concrete for what will become the footing of an indoor sports fieldhouse that is being built on the NexusPark site in Columbus.

About 40 trucks on Tuesday poured a collective 360 cubic yards of concrete on the north side of the NexusPark site in what officials said was a milestone for the construction of the fieldhouse, which is expected to be completed by December 2023.

The 150,000-square-foot fieldhouse is part of the NexusPark project, a joint effort between the city of Columbus and Columbus Regional Health to transform the former FairOaks Mall into a health, wellness and recreation center.

The fieldhouse will be “a sports and events venue that will host a multitude of different types of sporting and non-sporting events,” including local, regional, and state sports tournaments, as well as potentially hosting trade shows, conferences, graduations and large-scale community events, according to the project’s website.

“Today is a big day,” said Ken Maschino, superintendent at Taylor Brothers Construction, the construction manager working for the city on the project. “Getting that concrete in the ground is kind of a big milestone.”

The footing is the foundation that the structural steel sets on and connects the steel to the ground, Maschino said. The total size of the footing is about 270 feet wide and 585 feet in length, though workers poured concrete for about half of the north side of the footing on Tuesday, or just under 300 lineal feet.

Officials expected the concrete to be dry enough on Wednesday morning to start removing some of the forms and prepare to pour the next section of the footing, though “you wouldn’t want to drive on it or hit it with anything.”

“Once we pour (on Tuesday), then we have to move all of our forms and stuff to the next pour, and we have to tie all the rebar,” Maschino said. “There’s a lot of steel inside the concrete, so all of that steel has to get placed. We’ve already got the north side pretty much excavated. …Our game plan is to pour about 300 feet every six or seven working days.”

The work is expected to continue throughout winter, weather permitting, officials said.

For the complete story and more photos, see Thursday’s Republic.