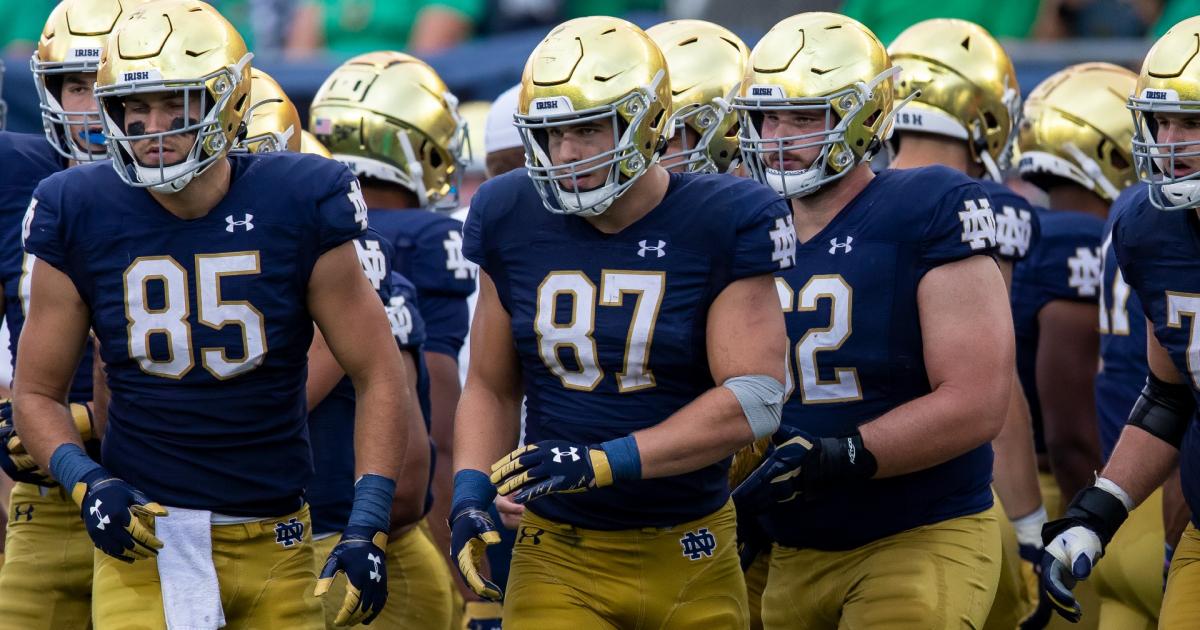 The top-five showdown between No. 2 Ohio State and No. 5 Notre Dame is the most-anticipated game on the Week 1 schedule.

The matchup between the Buckeyes and Irish is part of a loaded five-day weekend that starts with the renewal of the Backyard Brawl between No. 17 Pittsburgh and West Virginia on Thursday and ends with the ACC opener between No. 4 Clemson and Georgia Tech on Monday. There also are ranked matchups between No. 3 Georgia and No. 11 Oregon and No. 19 Arkansas and No. 23 Cincinnati.

Of those 17 games involving FBS teams in the Top 25, a total of four have single-digit spreads. Each week, Sporting News picks every AP Top 25 game by the spread. In Week 0, we went 5-2 S/U and 5-2 ATS. A look at this weeks’ picks:

It’s the first Backyard Brawl since 2011, and emotions should be high at Acrisure Stadium. Former USC quarterbacks Kedon Slovis and JT Daniels will be the focus, but the chess match between new offensive coordinators Frank Cignetti Jr. and Graham Harrell is even better. Who lets it loose in the opener? Four of the last five meetings have been decided by four points or less.

Remember what happened last time? The Chippewas won on a Hail Mary-plus-lateral in a 30-27 thriller in 2016. Don’t say Cooper Rush too loud. Oklahoma State remains a Big 12 sleeper, and they should pull away in the second half if they can contain SN second-team All-American Lew Nichols, who led the FBS with 1,848 yards and 16 TDS last season. The Chippewas were 4-1 ATS as a dog last season, and this line has ticked up three points from its open.

Pick: Oklahoma State wins 34-16 and FAILS TO COVER the spread.

This is another line that has increased 3.5 points from its opening spread. The Spartans have a new backfield with Jarek Broussard and Jalen Berger, and veteran quarterback Peyton Thorne returns for Mel Tucker. La’Darius Jefferson and Sean Tyler are a capable tandem at running back for the Broncos, but new quarterback Jack Salopek threw just five passes last season.

Pick: Michigan State wins 35-17 and FAILS TO COVER the spread.

Opinions vary on Michigan this season, but the offense should remain dynamic no matter how Cade McNamara and J.J. McCarthy split the first-team reps. The Wolverines were 5-1 ATS when favored by more than 14 points last season. Better days are ahead for the Rams under Jay Norvell, but this is a lot to ask in the opener.

There are high hopes in Raleigh, N.C., around a loaded NC State team that features veteran quarterback Devin Leary, but the Wolfpack have lost their last two trips to East Carolina. The Pirates were 3-1 ATS as double-digit underdogs last season, but that loss was a blowout against Cincinnati.

The Sooners are starting a new chapter with Brent Venables, but this will be where new offensive coordinator Jeff Lebby shows off a high-powered offense around Dillon Gabriel and a talented supporting cast. UTEP does have a Week 0 game under its belt, but this won’t be pretty in the second half.

This is a massive line for the Chick-fil-A Kickoff game. Georgia was 7-3 ATS when favored by double digits last season, but the Bulldogs lost 15 players to the NFL Draft. It’s still a loaded roster, but it’s one that Oregon coach Dan Lanning, who was Georgia’s defensive coordinator, knows well. Former Auburn quarterback Bo Nix also has some familiarity with the Bulldogs, and the Ducks are more talented than given credit for here.

Pick: Georgia wins 32-20 but FAILS TO COVER the spread.

The Bearcats are back, and they won’t back down from the challenge of playing a true SEC sleeper in Arkansas, which is led by dual-threat quarterback KJ Jefferson (above). Ben Bryant and Evan Prater are vying for the starting job at quarterback, and this is a tough road assignment. The Razorbacks pull away in the fourth quarter.

The Cougars have inherited the label of the Group of 5 buster, and quarterback Clayton Tune leads a talented roster. This is a dangerous in-state matchup. The Cougars have handled these matchups in recent seasons, too. That said, UTSA returns quarterback Frank Harris, and Arkansas transfer Trelon Smith could make an impact.

Pick: Houston wins 34-30 but FAILS TO COVER the spread.

Ole Miss coach Lane Kiffin worked the portal for new quarterback Jaxson Dart and running back Zachary Evans, and those stars will be on display in the opener against the Trojans. The Rebels are just 7-6-1 as the favorite under Kiffin, so this is a tough spread to follow. It could be tight on the cover.

BYU has a tough schedule this season, but the Cougars are equipped to handle it around quarterback Jaren Hall. BYU was just 3-7 ATS as a favorite last season. They start this season on the other end of that trend.

Who is ready to over-react to the Lincoln Riley experience in LA? The Trojans should have an explosive offense around Caleb Williams, Travis Dye and Jordan Addison, and Rice is in the way here. Look for the Trojans to make an authoritative opening statement against an overmatched opponent. It’s still a huge line to contend with.

The Utes are favored, and they are talented enough to travel and win on the road around quarterback Cam Rising and a strong running game with Tavion Thomas. The X-factor here is new Florida coach Billy Napier and quarterback Anthony Richardson. Is there room for a Week 1 upset? The hits keep coming for the Pac-12 in an “upset” at The Swamp. The Gators haven’t lost a home opener since 1989.

There is true excitement around the Wildcats this season, and quarterback Will Levis leads what should be one of the best offenses in the SEC this season. The RedHawks hung around in a 31-26 loss at Minnesota last season and are a decent pick to win the MAC. That won’t be enough in Lexington.

Alabama games are going to have spreads like this, and they are eternally difficult to gauge. Yes, the Crimson Tide should be able to pick their score in the second half, and Bryce Young has to get comfortable with a new core of receivers. The Aggies have a Week 0 game under their belt, but that’s not enough against a Will Anderson-led defense. The Crimson Tide covered both times they were favored by more than 30 points last season.

The line continues to increase in the Buckeyes’ favor, and few are giving the Irish a chance to win outright at The Shoe. Ohio State’s offense is going to be tough to stop around C.J. Stroud and a loaded group of receivers, and there is pressure on Notre Dame quarterback Tyler Buchner in his first huge start. The Buckeyes have won the last four meetings in this abbreviated series by an average of 16 points per game. Can new Notre Dame coach Marcus Freeman change that trend against an elite opponent on the road? What does new Ohio State defensive coordinator Jim Knowles bring to that side of the ball? The Irish sneak the back-door cover in late.

Pick: Ohio State wins 42-27 and FAILS TO COVER the spread

Clemson beat Georgia Tech 73-7 in 2019 but squeaked out a 14-8 victory with a goal-line stand last season. So, what’s it going to be at Mercedes-Benz Stadium? The Tigers should be nasty on defense, and this feels like the first of many “strike back” games in the ACC. We’re going to trust that the big plays return for the Tigers.