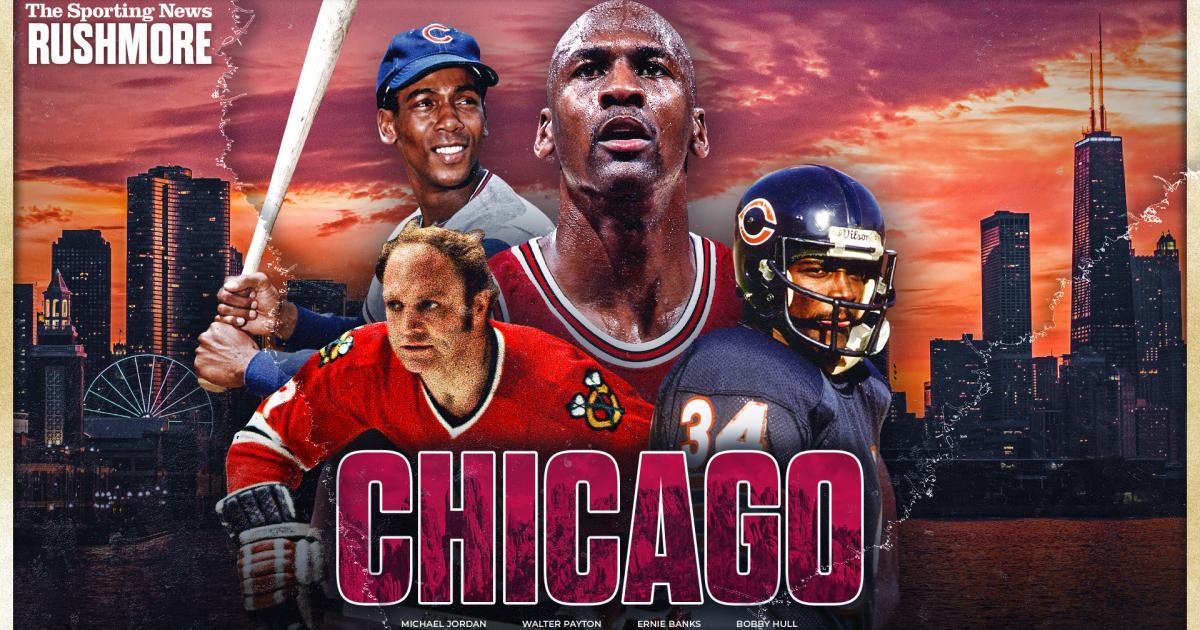 The SN Rushmore project named four pro athletes from the 13 cities that have had at least four of the following five leagues represented for at least 20 years – NFL, MLB, NBA, NHL, WNBA. While there were no hard-and-fast rules pertaining to the athletes selected, our panel of experts considered individual resumes, team success and legacy within the sports landscape of each city. Multiple players from the same franchise were allowed, and not every franchise needed to be represented. All sports fans have an opinion on this topic. This is ours.

Some cities in our Mt. Rushmore series produced heated debates on which athletes should be included, creeping into every office conversation for weeks (I’m looking at you, Philadelphia). Chicago’s lasted about 15 minutes. Producing some of the greatest professional athletes of all time can have that effect.

Jerry Reinsdorf may have gotten Harold Baines into the Baseball Hall of Fame, but no amount of lobbying from the Bulls and White Sox owner was going to change our top four.

MORE: See The Sporting News Rushmore of all 13 cities

Michael Jordan is more synonymous with Chicago than deep dish pizza. Walter Payton has spawned half a century of Chicago children stutter-stepping and stiff-arming friends in neighborhood football games. Even those who missed seeing him play by decades know the name Mr. Cub, Ernie Banks. And Bobby Hull ended a 22-year Stanley Cup drought for an original six franchise with his dominance in the 1960s.

Chicago is one of the best sports cities in the world. It’s only fitting that these four premier athletes grace its Mount Rushmore.

Everyone knows that Jordan was a magical athlete and maniacal competitor. The list of accomplishments goes on and on — 6-0 record in the NBA Finals, six Finals MVPs, five regular season MVPs, 14 All-Star games, 10 scoring titles. Those accolades only scratch the surface of the man who many deem to be the best athlete of all time.

Beyond the freak athleticism, what sticks out to KC Johnson, who covered Jordan on a daily basis for the Chicago Tribune during the Bulls’ second three-peat, was how well Jordan understood the mental side of the game.

“I think of just how smart of a basketball player he was,” Johnson says. “I think that sometimes gets overlooked because everyone just looks at his talent and his competitiveness. But his basketball IQ was ridiculous as well, and I think that’s one reason why he connected so well with his coaches. If you look at the relationships he had not only with Phil [Jackson], but dating back to college with Dean Smith, he always held the coaching position in such high regard because of his respect for the game and his ability to see the game.”

Jordan’s Bulls 3-peated to start the 90’s thanks to his incredible scoring and high-flying dunks. The second three-peat was driven more by that genius basketball acumen rather than pure physical talent.

Jordan kept his perch as the best scorer in the league, but he did most of his damage in the post. He used superb footwork and an unstoppable fadeaway jump shot to dominate the league.

“He completely transformed his game with that back-to-the-basket and post arsenal that he had,” Johnson says. “He still had that athleticism, and would remind you of how great he was at that. But his ability to economically shift his game to a different skill set is really noteworthy. Not a lot of players do that.”

It was obvious to anyone who watched Jordan during that time that you were witnessing history. He took the game to places it had never dreamed of, and the outcome of the games were never in doubt when he was at his peak.

“I remember distinctly reminding myself to [soak it in], covering him, because you just saw such greatness and such success on such consistent levels that you never wanted to take it for granted,” Johnson says. “You want it to remind yourself that this was incredible stuff you were witnessing.”

Sweetness set a number of records during his career. His 16,726 yards, since broken by Emmitt Smith, came off then-records of 10 seasons of 1,000 or more yards rushing and 77 games of 100 or more yards.

His 275 yards rushing against the Minnesota Vikings in 1977 also set the single-game record at the time, and it came off a week of battling the flu. It’s a game Johnson remembers well. That’s because he was in the stands as a distressed 10-year-old, broken-hearted seeing the vaunted Purple People Eaters Vikings defense unable to stop Payton.

“What’s crazy about it is I grew up a Viking fan in Evanston. So I was openly angry that Walter Payton was making NFL history.”

Not even the elite defenses could stop Payton. They could get in his way, but they couldn’t bring him down.

“His running style was a big reason to me why he connected with the Chicago fandom as well as he did, because while graceful, it also had quite a bit of power and strength and undeniability to it,” Johnson says. “He had so many runs where he’d be dragging one, two tacklers.”

Back in those days, Chicago cherished its reputation as a tough, hard-nosed city. The 1985 Bears, the last team to win the Super Bowl, featured a rugged defense and Payton pounding the ball 4.8 yards per carry on offense.

“He was blue collar, and connected with the city in that realm,” Johnson says. “His offseason workouts were legendary. He used to go to this hill and train and run up and down the hill to the point where he would puke. And he was very stoic. He could get in the end zone. And he just slipped the ball to the official, like, hey, I’ve been here before. He didn’t have a lot of celebratory nature to him. He just got the work done. And that’s one reason beyond his talent that the fan base loves him so much. He just fit the franchise to a tee.”

Payton’s legacy as a humanitarian remains. The NFL’s Man of the Year award, given to the player who demonstrates outstanding contributions to society off-the-field while handling himself in an exemplary fashion in uniform, was renamed to the Walter Payton Award after his passing in 1999.

“His son Jarrett is a local media member now,” Johnson says. “He’s always at the Super Bowl for the presentation. That’s been a neat aspect to continue the legacy that Walter created here.”

Payton’s legacy lives on through the Walter and Connie Payton Foundation, which aids the emotional healing of neglected, abused and underprivileged children by providing tools and opportunities to build self-esteem and encouragement.

There is Mr. Cub and there certainly is no Chicago Mt. Rushmore without the city’s most beloved baseball player.

If you grew up in the midwest before the advent of streaming television, you remember watching the Cubs play day games on TV. Johnson was part of that generation.

“I used to run home from school and watch Cubs games on Channel nine, WGN,” he says.

The biggest knock on Banks? Over his 19-year career, he never played in the postseason. But Banks was still a great player and infused the franchise with joy.

“Ernie was such a gregarious guy,” Johnson says. “The ‘let’s play two’ trademark, always talking about how great it was to be at the ballpark and what a great day it was to play. So that was all part of the Cubby lore growing up, because the Cubs were awful. And yet, they still were a lovable franchise, because of Wrigley Field and because of their announcers and that enthusiasm from Banks’ legacy. I grew up a huge Cubs fan, and Ernie was a big reason why.”

There are certain iconic moments in sports where you remember exactly where you were when they happened. For Chicagoans in the 70’s, Banks hitting his 500th home run was one of those moments.

“I grew up knowing exactly who he was. I remember my parents plopping me in front of the TV to watch a highlight of his 500th home run. I was almost three years old. And I believe or not, I remember that because my parents made such a big deal out of it. And I remember the graphic flashing photo and hey, hey, which was Jack Brickhouse signature call for a home run.”

Banks’ numbers speak for themselves. He entered the Hall of Fame in 1977 after amassing 2,583 hits, 512 home runs, 2 MVPs, 14 All-Star games, and a gold glove. Johnson remembers his playing style fondly.

“He was that rare guy who could hit for power or average, a wiry guy,” he says. “And I remember everybody always talking about his wrists. His wrists were so strong. And that’s why he was able to hit as well as he did. Just a great player on both sides.”

Bobby Hull was once quoted saying that hockey “is show business, and we’re here to put on a show.” No one embodied that mindset quite like Hull.

It’s a mindset that Johnson echoes after decades of covering Chicago sports.

“Until Jordan came along, (the Blackhawks) were the show in town at the Chicago Stadium. They were the draw because they were a good team, competitive team, and they had Bobby Hull.”

With his flowing blonde hair and blistering slap shot, “the Golden Jet” took Chicago by storm in the late ’50s and throughout the ‘60s. Hull spent 15 seasons with the Blackhawks, truly giving the fans an experience they wouldn’t forget. He not only was named to NHL’s 100 Greatest Players list in 2017, but has long been regarded as one of the best left wingers ever.

“The reason why he was such a legend is not only because he’s one of the greatest left wingers of all time, but because of the ambassadorship that he showed representing the Blackhawks and the sport of hockey,” Johnson says. “He was legendary for this. He would sign autographs for hours after games. And he was this dashing, good looking farm boy with blonde hair. That’s why they call him the Golden Jet. He had this booming slapshot. Incredible player. But then off the ice, he was just this down home, approachable fan favorite that had time for everybody. So that’s why he connected so much with the Blackhawks.”

His hair was a thing of art in itself. But it was even more glorious when Hull would take the puck from one end to the other, using his speed to weave around opponents. His goals surely would have garnered a spot in SportsCenter’s top-10 night in and night out.

The shot was the most dominant part of Hull’s game. Between the high velocity that he could fire the puck at and his “banana blade” that curved the stick nearly three inches, his shot was a nightmare for goaltenders to face.

“The idea was not to stop that thing, but to avoid getting killed,” Hall of Fame goalie Glenn Hall told NHL.com. “Every once in a while, Bobby would fire the puck and it would fly into the stands at the Stadium. If the cleaning ladies were up there, you should have seen them scatter. They looked like Olympic sprinters.”

His wicked slapper helped him lead the NHL in goals seven times during his career, which is the second-most out of any player. Hull was the first player to score more than 50 goals in a season, a feat that he would accomplish two times in his NHL career while also scoring exactly 50 twice. He was critical in the team’s Stanley Cup win in 1960-61, bringing the city its first Stanley Cup since the 1930s.