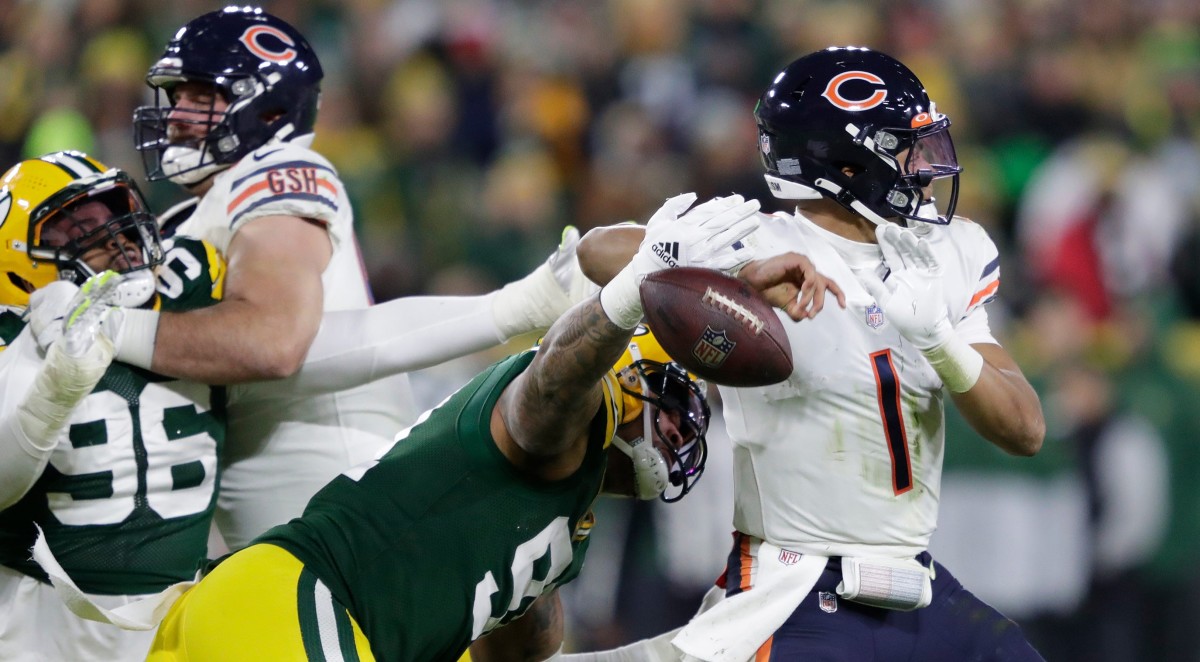 When the Bears last saw the Green Bay Packers, they had little hope of pulling off an upset.

This was the Packers defense the analysts anticipated as top 10 or top 5, and dominant. It was the double-edged running game of Aaron Jones and AJ Dillon and, of course, it was the quarterback who owns the Bears, Aaron Rodgers.

The receiver corps was different without Davante Adams but Rodgers made it work and the Bears didn’t need have much to answer with as Justin Fields hadn’t yet begun to terrorize defenses with his running. The three-headed Bears rushing attack hadn’t formed.

Fast forward to now and much is different. The Packers defense has been abysmal stopping the run at 31st in the league. They gave up 363 yards rushing to Philadelphia last week. How is that even possible? Even in the 1970s during the Larry Csonka-Jim Kiick-Mercury Morris era, no one in the NFL would have thought something like that possible.

Justin Fields is back from a shoulder injury, although you really have to wonder how much he wants to risk running against Green Bay with his injury unlikely to be at 100% after two weeks.

The Packers have a budding receiver in Christian Watson but he still hasn’t made more than four catches in a game, and Aaron Rodgers is pushing through what he says are his own injuries to play against the Bears and continue his ownership rights.

Cole Kmet trotted out the oldest football cliche on record and made sports journalists cringe this week when he said you can “regardless of the records of the two opponents it’s always big,” when the Bears and Packers play.

In the end, the Bears are still facing an uphill fight because they are without five of the starters who gave up 27 points to Green Bay in the 17-point loss earlier this year. This group on defense appears capable of giving up 40.

How the 3-9 Bears are going to stop the 4-8 Packers without Eddie Jackson, Kyler Gordon and Jaquan Brisker is a real mystery.

Fields is going to need to run the ball whether the Bears want him to or not. It was the only formula for offensive success they had besides throwing the ball to Darnell Mooney. And not they can’t do that, so it’s going to be Fields, David Montgomery and maybe Darrynton Evans running, mixed in with an occasional jump ball to Chase Claypool.

They need the ball control Fields’ third-down scrambles or planned runs on first and second down supply in order to both keep the clock running and keep Rodgers off the field. Jalen Hurts ran for 157 yards on the Packers last week on 17 carries. Fields is going to need to do something similar but it must be accompanied by rushing from someone else, like David Montgomery. The Eagles had 143 from Miles Sanders when they rolled up 40 points last week.

They need the ball control but they also need it to produce touchdowns because Rodgers should have no problem scoring against the substitute Bears secondary or a front seven that hasn’t scared anyone since Robert Quinn and Roquan Smith were dealt away.

Part of the ball control issue has been lack of anyone for Fields or Trevor Siemian to find open when they passed. The wide receivers obviously have problems getting open and trying to incorporate Claypool at this point in the season isn’t easy.

But one way they have totally failed is using multiple tight end packages within the passing game. They run block, but haven’t been involved as receivers and this must change with Mooney gone. Kmet gets his job done. Ryan Griffin and Trevon Wesco have been practically invisible in the passing attack. Wesco has two receptions on the year and the only one he’s had since the Giants game was a 3-yarder last week. Griffin last had a catch against New England and has three on the year.

This will likely fall on Riley Reiff’s shoulders unless the Packers move him around up front.

The reason this is critical is Smith is the pass rusher who has made life miserable for Fields most. Before they allowed Za’Darius Smith to leave for the Vikings, it was both Smiths. Now it’s just Preston. When they still had Rashan Gary the Packers presented the double outside threat but he went on IR with a torn ACL in early November. Since he left, the Packers are giving up about 11 more points per game. Now it’s Preston Smith who is the main problem and any other pass rush headache is from a blitz or from a blocker just not doing his job. Smith has been a thorn for the Bears with 6 1/2 sacks against them as a Packers pass rusher, 7 1/2 overall. He has two sacks of Justin Fields in each of the last two games against the Bears and six quarterback hits in those games.

Smith has a knack for coming up from behind Fields to get it done when he is moved to the left side of the offense. Whether it’s Braxton Jones or Reiff blocking him, or Montgomery chipping, they need to get Smith blocked to keep Fields feeling confident about his left shoulder as he steps and throws. He’ll need time for this backup group of receivers to get open and Smith can prevent this.

It’s a simple tactic. This shouldn’t be hard because until Fields went down with his shoulder injury their problem had been finishing games. Staying close was their real strength.

The reason this can lead to the upset is Green Bay started the season getting outscored by 43 points in the second half over the first seven games. They’ve gotten better, since then but when they have outscored an opponent in the third and fourth quarters in Games 8-12, it hasn’t been by more than two points except for the Buffalo game. And they were already losing by 17 at halftime when they outscored the disinterested Bills 17-7 in the second half. There are many theories as to why the Packers have had their own problems finishing, but none of those have to do with Rodgers being 39 years old.

It’s been their offensive line injury issues combined with nagging injuries to both running backs but most of all it’s been a defense too easy to beat when it matters most. Just finding a way to survive into the fourth quarter for the Bears could be all that matters in this one.

The Bears have lost five straight times when they had the ball for one final possession with a chance to win or tie. Simply getting the chance to end that streak or even add to it would be a sign of progress considering the lack of success they’ve had against Aaron Rodgers and Green Bay over the years.

Actually winning one at the end of the game and doing it against their antagonists from the north would be the chance to kill two birds with one stone, so to speak.