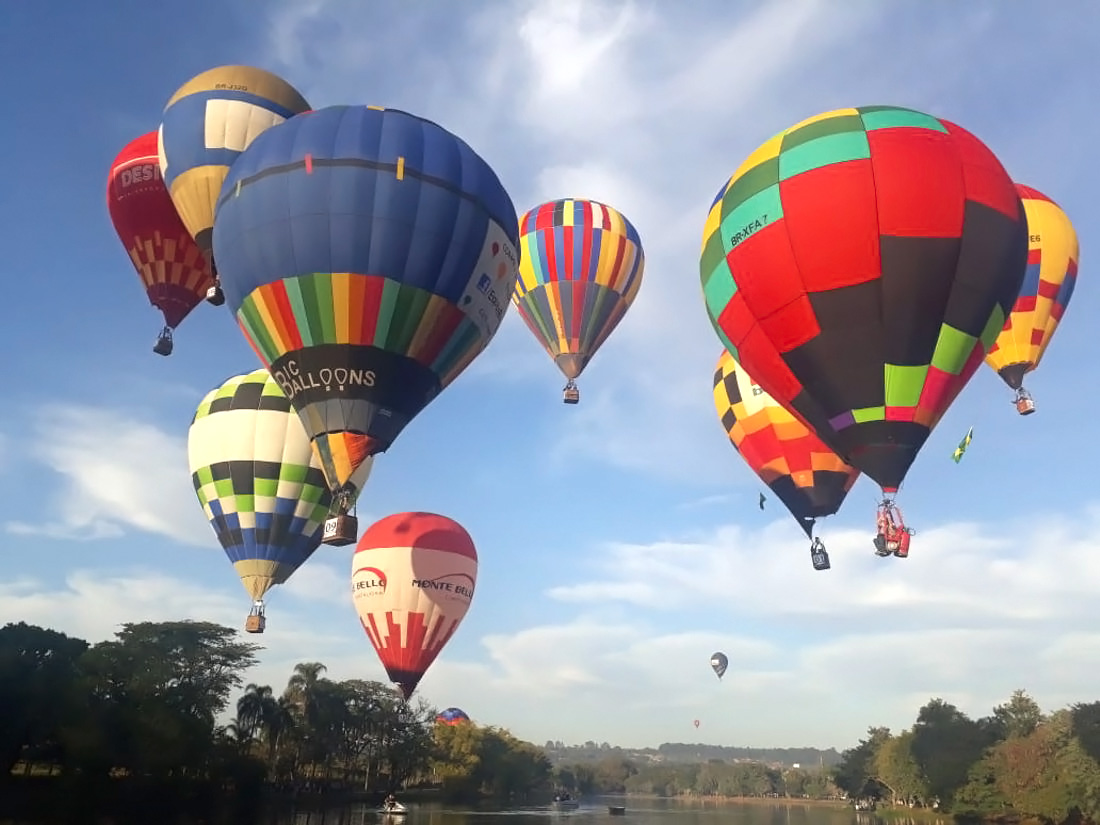 We started the year 2019 very busy. The decision by the ballooning entity, Brazilian Ballooning Confederation (CBB) to hold the National Championship with less than 30 days to the General Briefing was a short window. But it worked. Between the first invitation via email on 28 June and the start of the competition on 22 July, it was less than 30 days for the teams of officials and pilots to get organized.

The host city was Araçoiaba da Serra in the interior of the state of São Paulo, where we have been flying since 1999. A beautiful city, with valleys like regions of Europe. An area of small and large farms that has in its DNA to keep the region natural and beautiful. Many side roads, and easily accessible.

The region is home to the Ipanema National Forest, which is a Brazilian conservation unit managed by the Chico Mendes Institute for Biodiversity Conservation – ICMBio. Morro de Ipanema (Ipanema Hill), a beautiful mountain shared with 2 other cities, Iperó and Capela do Alto is a prominent feature in the area. 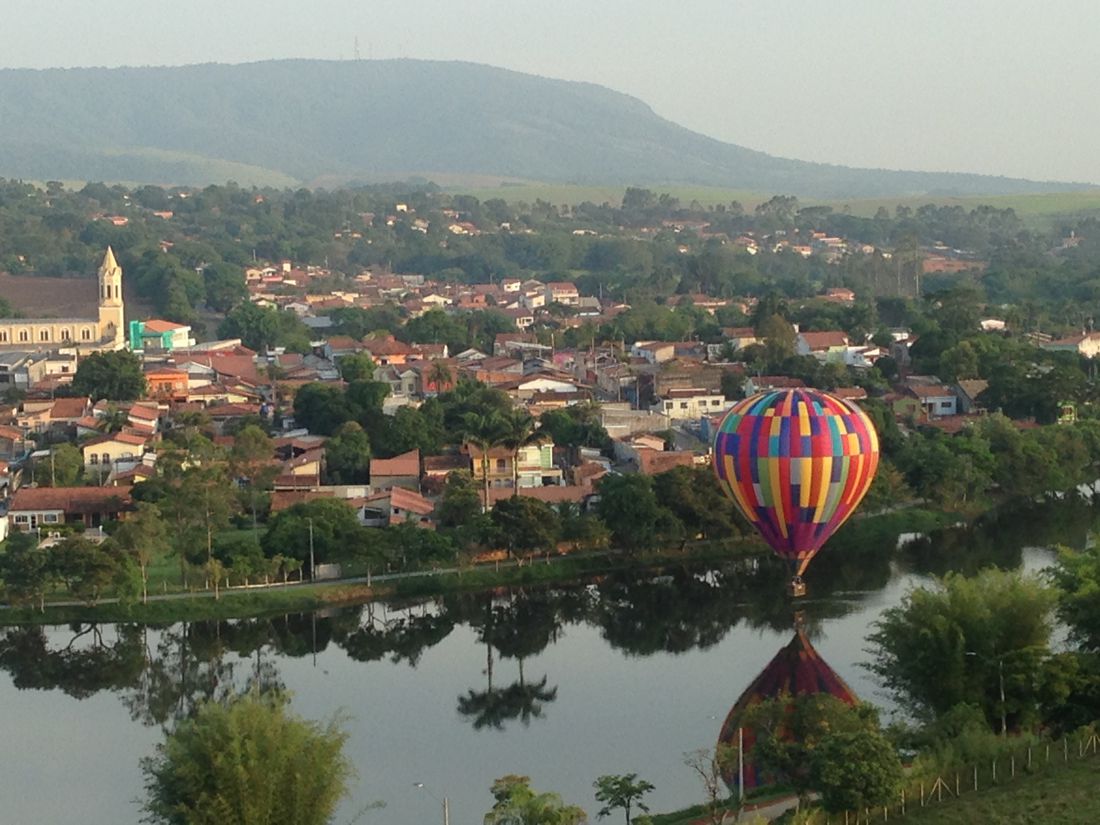 Morro de Ipanema is also the birthplace of the first iron foundry in Brazil and the birthplace of Francisco Adolfo Varnhagen in 1816. He became known for so many things he did, including diplomat and historian. He is known as the Father of Brazilian History.  He wrote describing two centuries of Brazilian development. His work is a milestone today for ancient and current historians.

At the top of Morro de Ipanema there is the monument to Varnhagen, visited by the Royal Family on November 11, 1884. On this monument there is an inscription: “The memory of Varnhagen, Viscount of Porto Seguro, born in the fertile land discovered by Colombo. Initiated by his father in the great and useful fields, his country trembles and he wrote the history to his land. Your immortal soul gathers all your memories here ”.

It was exactly in this region that the two FAI South American Youth Ballooning Camps were held, with the first version in 2018 and then again in 2019.

A lot of work and dedication on the part of municipalities, City Hall, Sport, Tourism, and other departments, in addition to the Commercial Association and volunteers, all did an excellent job in less than 30 days. The city was a gracious host to the 20 flying balloons. And Aracoiba da Serra received numerous visitors from other cities in the state of São Paulo. And stories of the event were disseminated by the national and regional press. 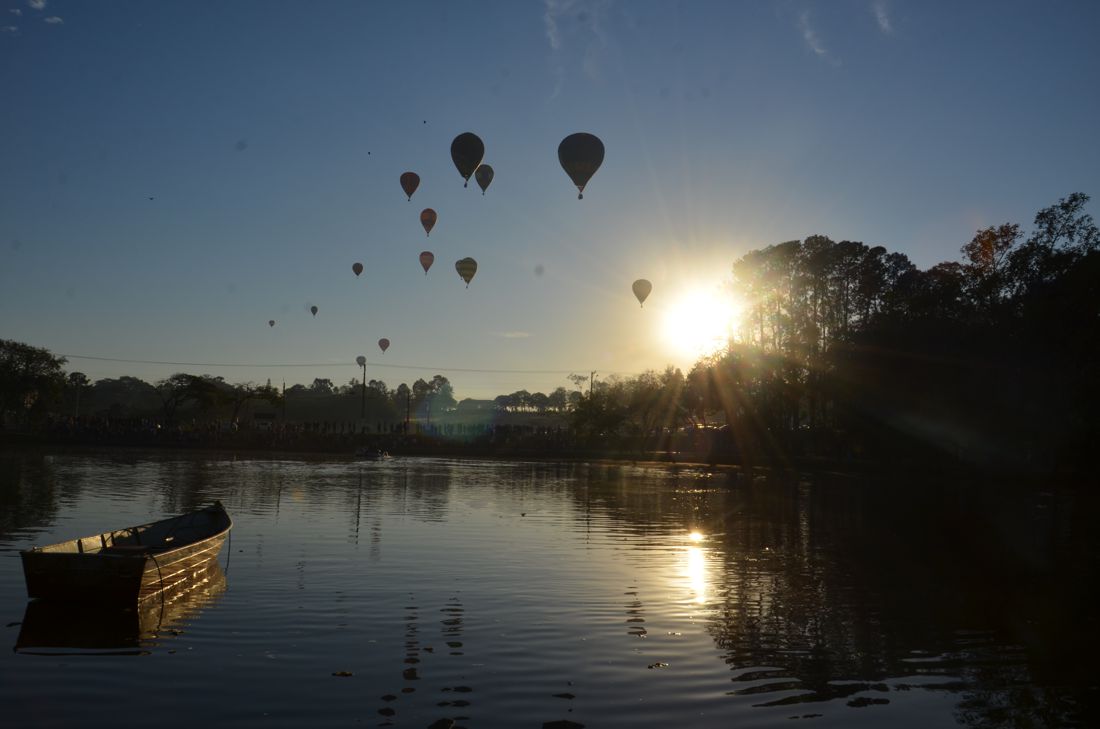 Brazilian Ballooning Confederation (CBB) and a little bit of its history

Ballooning has existed in Brazil since 1970, but as an entity since 1987. The 1st Brazilian Championship was held in 1988, in the City of Casa Branca, with pilot Rubens Rosdon Kalousdian the winner.

– Favorites for the title flying intensely –

With a few days to go before the big event, many went into their training mode. During this training period, the event stories show its favorites, a little because of the pilot presence in the competition area for training, recent or history of winners and/or its sympathy from past stories shared by the press. All this together leads everyone to study rules, get crew ready, take care of the equipment, look for extra help, etc. A real crazy race for the podium.

– A lot of dedication, perseverance, and resilience –

The technical direction was handled by pilot Marcos Bonimcontro and his team. I think it is very important to list their names, because all these wonderful people worked hard for us to have great memories of a very successful championship. Often, the technical team doesn’t even have time to eat and sleep.

It is worth remembering the names that are always helping us. I think they would like to be mentioned. I just hope I haven’t forgotten anyone: 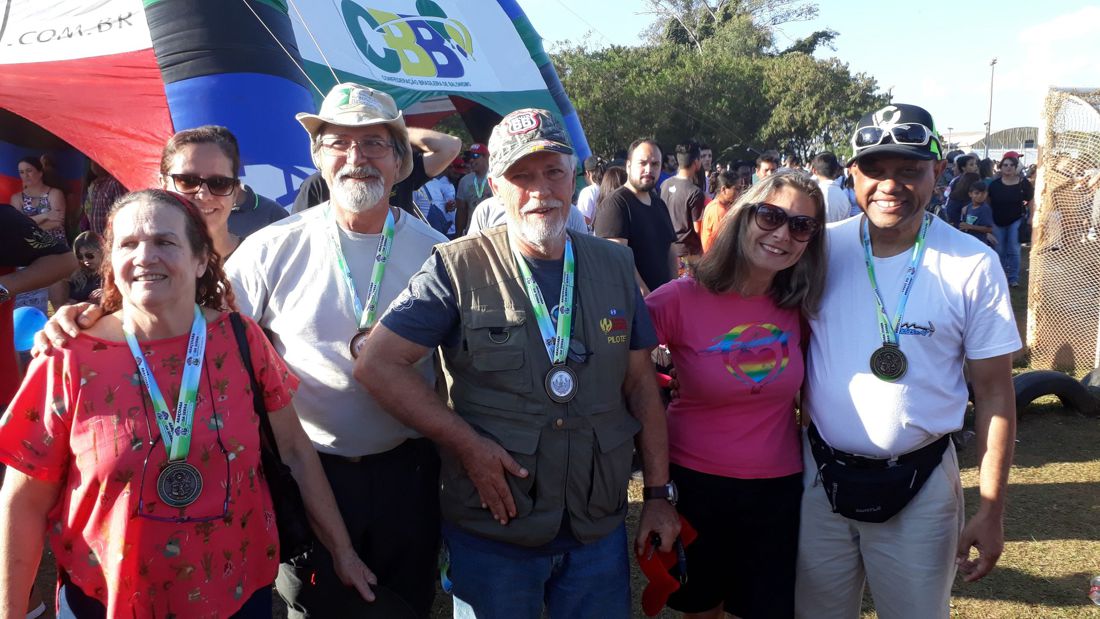 Laís Pinho is from the state of Rio Grande do Sul, from a beautiful city called Torres, which has hosted an annual balloon event since 1987. Known worldwide as TORRES INTERNATIONAL HOT AIR BALLOON FESTIVAL, the event is organized by Bruno Schwartz of Air Show.

The Laís Pinho family has been sponsoring the event for decades, offering a Chevrolet car from their dealership for the famous KEY GRAB TASK.

Countless international pilots have flown in this most charming and beautiful place where you can fly close to the beach. This event is so important for the city and region that today it has its own pilots’ association. The Gaúcha Ballooning Federation has its headquarters in the city and has already trained more than a dozen pilots, great pilots. 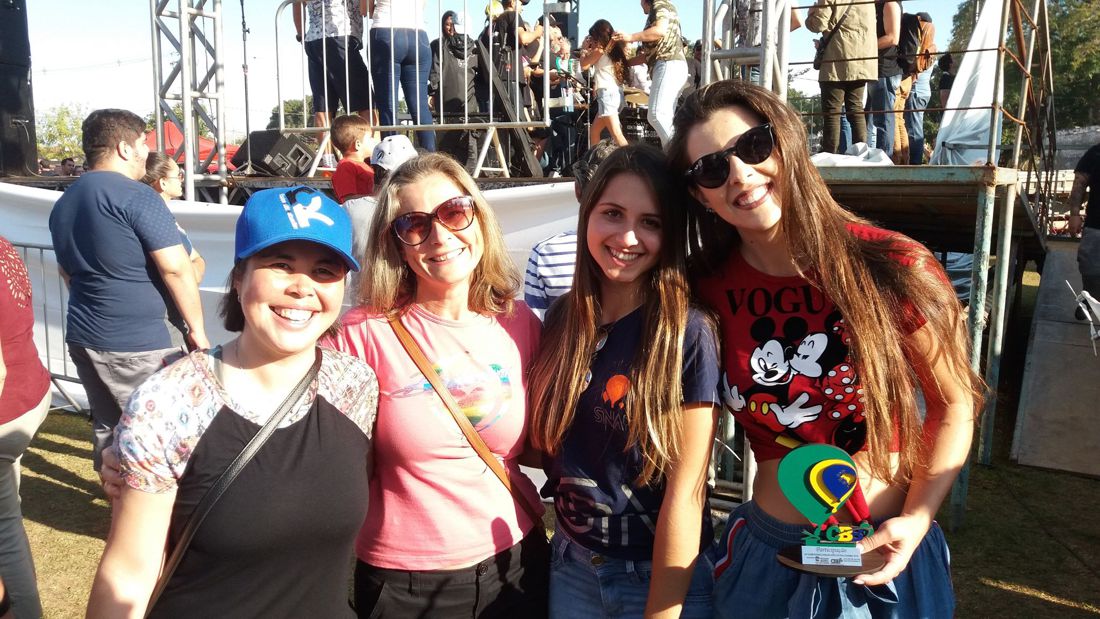 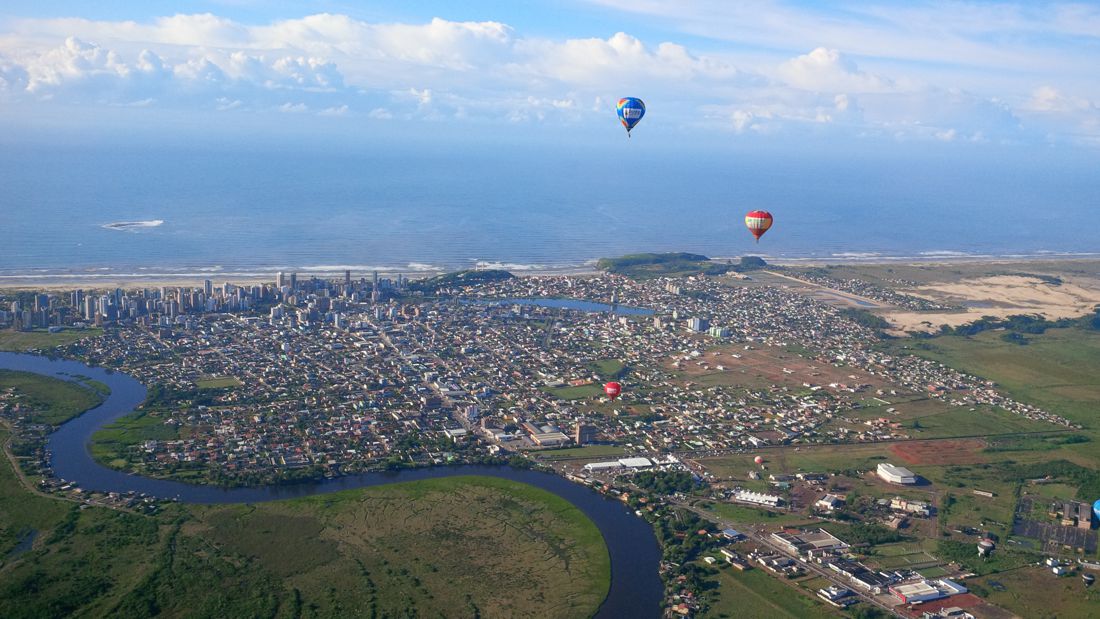 Five very determined young people participated in the 2019 Nationals. Each deserves a lot of support in their quest to represent Brazil.

In a Brazilian championship with 20 participants, we are proud that 25{066dbc63777e5ed549f406789d72fdeebd77a32711d57f7b38ff2b35c4ba2a42} are juniors. That already excites us as it shows the growth of the sport, which undoubtedly happens, because of the organization of events, whether festive or competitive.

I also believe that the mention of these young people is essential to energize them and their progress in ballooning. They are:

As a point of interest, it’s worth sharing that some of the new practitioners come from a balloonist family. This includes Markus, Fábio, Felipe and Laís. Only one, João, came because his city is the headquarters of the biggest event in South America, mentioned earlier, the Torres International Hot Air Balloon Festival.

All of them are very fond of the sport. Each one, in his own way, has made their mark in ballooning history in Brazil and internationally.

There was a total of 20 participants.  Some already Brazilian champions who have flown in international events and others in state, regional and national events. Some are event organizers, other instructors, and other professionals in the field. A mixture of stories, origins, but all intertwined, because nobody in this modality is created alone in Brazil. There is always some reason and link between one and the other to take the first steps and reach a national championship.

– Generates apprehension but fosters the challenge for leadership

I don’t know if it is like that in other countries, but here, groups are formed, team A, team B, team C, and the new solitaries fit into one of them. There are also those who participate in all of them to see and analyze the styles and see where they fit best.

But for a long time, flying as a team has been the best solution, but it is important that everyone on the team plays their role of guidance.

We saw that this year. Those who have been flying for a long time only with family and one or two friends, were going to follow this line of family working together. One of the pilots decided to assemble Team Brasil, and all worked together, finding their way as a Team.

The championship ended up being flown in groups, and the perfection was so great, that in some tasks there were ties for first place. This is certainly a sign of the improvement of our pilots. This also led to very high accuracy, but always at the expense of the first pilot that passed through the target (and had to share 1st place points). In this regard, our teams were able to share each other’s lead in harmony showing the way to the target.

Team Brasil had the first four places, 6th, and 8th. It was very good, and we learned a lot from each other’s styles, planning task flying strategies, and debriefings after the flights for positive and negative on the task results.

Shared information brought an incentive to the new ones who accompanied us. Sharing competition information, including understanding the task strategy for a particular flight, selection of takeoff location, etc. In short, everything that the new balloon pilots can learn from the experienced pilots who already know their routine by heart and experience.

The award ceremony was very beautiful. Many people, a lot of joy, and of course there is always the pain of those who did not reach the podium. But we know that there is the next time, and everyone who is dedicated will have their turn on the podium.

– Age in ballooning does not interfere, so never give up –

The champion was Rubens Kalousdian, 61 years old. With that title he accumulated his eighth championship and several times second, third, fourth and so on.

The beauty of this sport is that its strength and strategy does not depend on age, but on pilot performance, preparation, and determination.

But as Rubens says, we need more of these events in Brazil, to be able to reach the top 10 in the world. We have to fight here in Brazil to do many events. May the times of many events return after the pandemic. 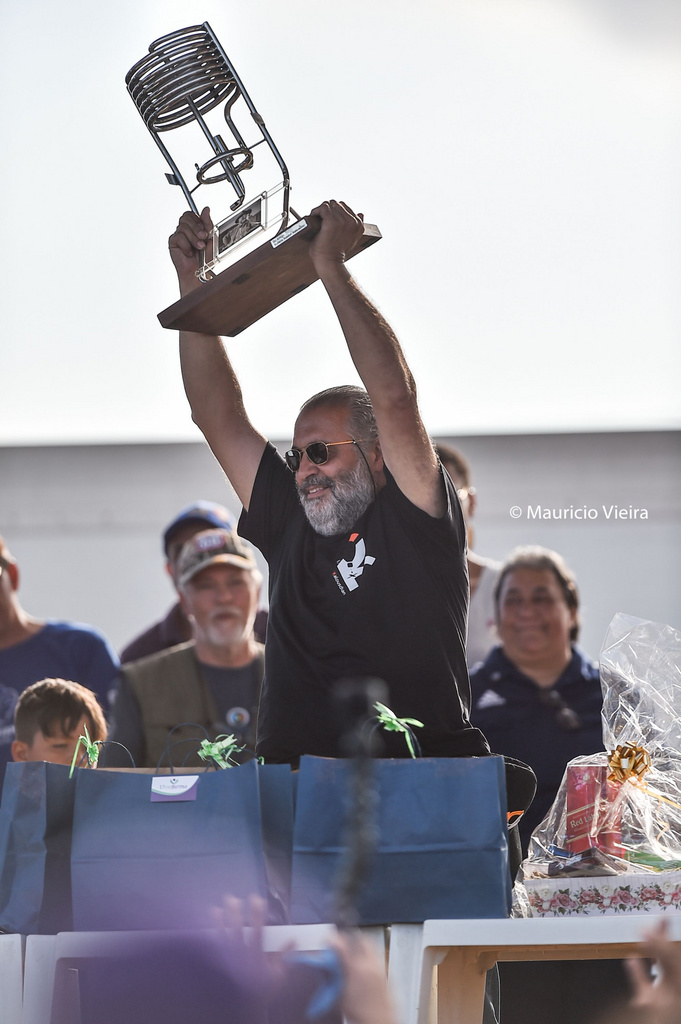 We are getting there, the target is not so far away from us. In the results you will see that we had 29 tasks with just one canceled. The accuracy was so great that it was impossible by any means to distinguish the winner before the final results were posted.

CLOSING WITH THE WORDS of THE FIRST PLACES. Rubens, Felipe and Markus

“My desire to win follows me since the first championship, and together with my son Markus and the formation of Team Brasil at the last moment, we all had the same goal, one of us being the champion.

“When I heard that the championship would be in Araçoiaba da Serra I was super anxious, after all it was going to happen let´s say, “at my house”.

“The victory and the conquest of the 8th title I want to thank my super Marina who was always by my side and my super son Markus who despite the healthy discussions in the decisions always supported me.

Words from the current 2nd place in the Brazilian Balloon Championship

“After having done my check flight in 2011 in Araçoiaba with Rubens it was very nice to be able to fly in that beautiful region again and get the second place behind only Rubens himself.

“Looking forward to flying there again!

“Thank you very much” – Filipe Tostes

Words from the current 3rd place in the Brazilian Ballooning Championship

“It was a very competitive event in a city that I can say is perfect for ballooning, it really made the most of each pilot.