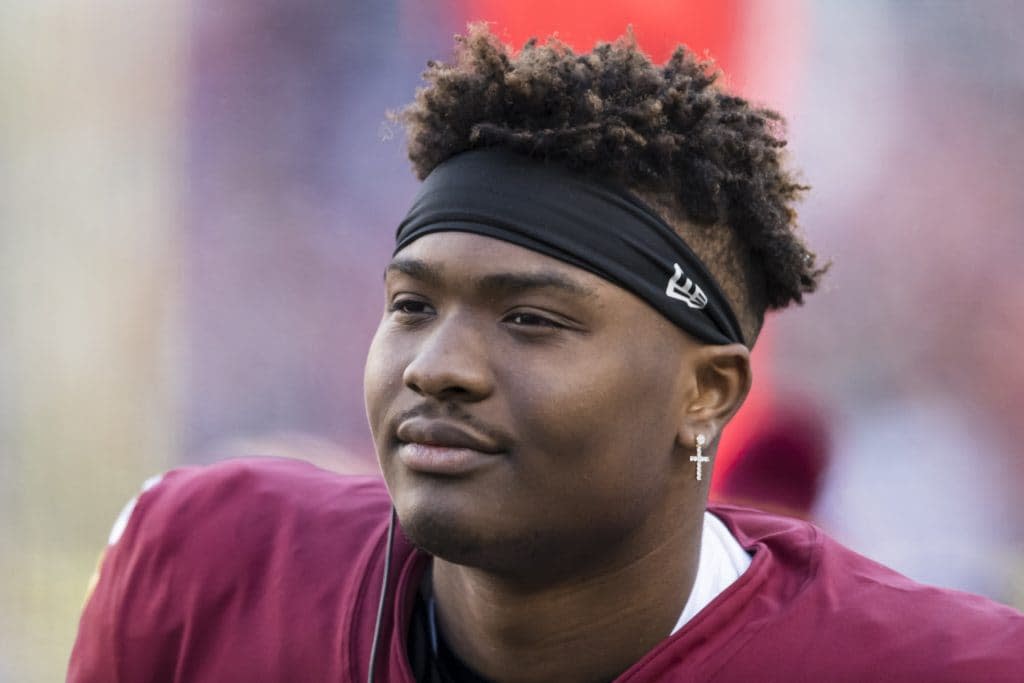 Stop me if you’ve heard this one: A professional athlete with a zillion-dollar contract who’s barely old enough to rent a car from Enterprise gets into trouble. Maybe they’re caught drunk driving (obviously not in a rental car), arrested at a strip club, or worse, accused in a domestic violence incident.

It happens so often we barely pay attention anymore, which was likely going to be the case when Dwayne Haskins, the underperforming quarterback of the Washington Football Team, was cut last week. However, thanks to the brilliance and insight of Booger McFarland, an analyst on ESPN’s NFL Primetime, we now know that Haskins and all other Black quarterbacks are just one missed team meeting away from being poster boys for Scared Straight: NFL Edition.

It pays to be the anti-Black scold on sports television.

Haskins was cut last week after just over a year of poor performance on and off the field for the Washington Football team. When pictures surfaced of him partying at a strip club without a mask (violating NFL COVID-19 safety protocols for a second time) the team was done with him. While the sports commentariat mostly focused on Haskins’s wasted potential, McFarland saw Haskins as an indictment of most Black men in the league.

“It bothers me because a lot of it is the young African-American player. They come in and they don’t take this as a business. It is still a game to them. This ain’t football. This is a billion-dollar business.

I saw a quarterback do it. I saw JaMarcus Russell do it. The No. 1 pick in the draft, they gave him $40 million, and he threw it down the damn drain because he didn’t take it seriously.

Before we go further, I just want to point out that it’s hard for me to take anything seriously from a grown man that allows himself to be called “Booger” on national television. I don’t care if that’s the nickname his father gave him or if it was bestowed upon him by a Yoruba priest after days of meditation or it’s a family name (Meet the Boogers sounds like a reality show on ID Discovery) no self-respecting grown man should be referring to themselves by coagulated snot on television.

McFarland was dragged like a menthol Kool cigarette after a barbecue for his take, continuing in a long line of memes and jokes about his poor analytical skills. However, those criticisms don’t really take into account what role McFarland was playing.

There is a certain subset of African American sports announcers, anchors and analysts who are always ready to spring into action and give a Black face to ‘sports’ opinions held by racist white fans. This doesn’t mean that’s the only thing that these men and women do, or that these opinions are not their own, but the anti-Black sports scold is a mouthpiece nonetheless.

Consider them to be the Diamond and Silk for Joe Sixpack sports fan, who’s resented every Black athlete since Michael Jordan‘s retirement. Need someone to make an uninformed concern trolling attack on Colin Kaepernick and his movement against police brutality? You can always count on Stephen A. Smith to deliver. Need a Black face to criticize other Black colleagues, Black Lives Matter, heck even protests against Trump’s Muslim ban and parrot the inherently racist ‘stick to sports’ mantra? Sage Steele is ready and willing.

Of course, the granddaddy of the anti-Black sports scold is Jason Whitlock, who’s gone full Uncle Ruckus, blaming every problem in basketball and football on Black people, (never the nearly 100{066dbc63777e5ed549f406789d72fdeebd77a32711d57f7b38ff2b35c4ba2a42} white ownership across the various leagues) and essentially going full MAGA by last year.

Whitlock’s relentless attacks on Black people, his shameless bojangling for white conservative patronage (his word not mine) knows no bounds. This is a man who blames Black people for being shot by the police and advocated recruiting “Whites Only” NFL teams. Being the anti-Black sports scold is a lucrative profession if your soul and conscience can deal with it.

This is why countering McFarland’s racist rant about Dwayne Haskins’s failures as a quarterback is almost unnecessary. You can point out that the NFL is dominated by Black athletes, and quarterbacks like Russell Wilson, DeShaun Watson and Patrick Mahomes II, who do not only know the ‘business of football’ but speak out for social justice as well.

You could also point out that the biggest flop in recent history across all sports was Johnny Manziel. The famous Texas A&M quarterback who was so popular in college he needed escorts around campus, who was supposed to be the savior of the Cleveland Browns and the NFL as a whole. This same Johnny Football, summarily destroyed his NFL career with drinking, partying and a domestic assault and admitted he wasn’t taking his job seriously.

All while the majority-white sports press kept giving him excuses and pleading for him to get second, third and fourth chances. I don’t remember McFarland claiming that Manziel was a canary in the mine for a generation of poorly behaved white NFL players. Heck, if you really wanted to reclaim your time you could point out that athletes promoting their brands, skills and work ethic on social media is actually a part of the current NFL business model, and thus, a reflection of how young Black athletes are tuned into the economics of the game.

Of course, pointing out all of that to McFarland assumes that his goal was to make a logical argument as opposed to positioning himself as the next go-to Black person whenever a racist hot take needs to hit the airwaves with the coverage of a Black mouthpiece.

This will not be the last nor the most offensive time that a Black person is used to attack Black people in the name of sports analysis, but at least in this case we can point to one small victory. Unlike some of the more prominent anti-Black sports scolds, McFarland isn’t on the air that often, he’s not a prolific writer or overall media presence. In fact, his Haskins rant might be the largest moment in his new announcing career.

While I’m not a doctor, I know for a fact that as long as you don’t go digging for them, Boogers are pretty easy to ignore.

Dr. Jason Johnson is a professor of Politics and Journalism at Morgan State University, a Political Contributor at MSNBC and SIRIUS XM Satellite Radio. Notorious comic book and sports guy with dual Wakandan and Zamundan citizenship.

Have you subscribed to theGrio’s podcast “Dear Culture”? Download our newest episodes now!

The post Booger McFarland and the rise of the anti-Black scold in sports appeared first on TheGrio.