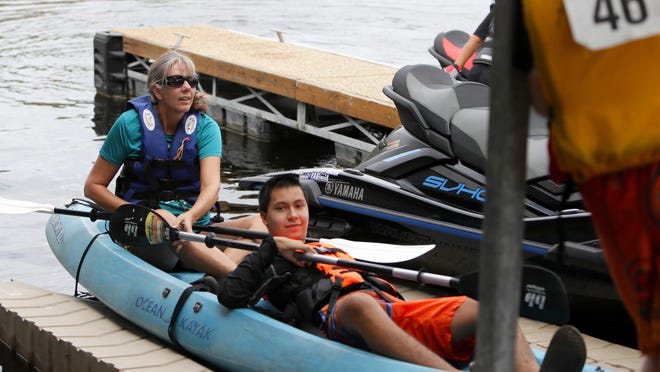 Nine-year-old Bella Collett said she had “no words” after getting back to the Barrett Lake Marina late Saturday morning after her first-ever water skiing excursion.

“Usually, I never get to do stuff like this, so I’m excited,” she said to The Arizona Republic.

Collett uses a wheelchair because of her spina bifida, a birth defect in which the spinal cord doesn’t develop properly. She was one of dozens who participated in Arizona Adaptive Water Sports Kids Day on Saturday, an event that provides adaptive equipment and makes water sports accessible for disabled youth.

“This is the opportunity she has to do something and to gain confidence and to see and meet other people with different needs than hers but (know) that we’re all the same in the end,” said Michelle Collett.

Bella Collett entered the water with the support of a swing lift at the dock and a few helping hands. She was timid and even gave a thumbs down right after the boat took off, later telling The Republic she was scared by the speed at first.

“But then I wanted to go faster,” Collett said. “I was not nervous anymore, and I was really excited.”

As the boat continued circling the lake and waves crashed around her, Collett’s smile grew bigger and she raised both hands in the air in triumph.

“I felt like I was experiencing things I’d never experienced,” she said after getting back from the 15-minute ride. “I wasn’t scared after it happened, because I knew what it was like to try.”

Paralympian surprises children with their own adaptive kayaks

Adding to the day’s fun was a visit from Matt Scott, a five-time Paralympian who was Team USA’s closing ceremony flag bearer in Tokyo last month.

Prior to getting in the water, Scott talked to the kids and their families about his journey to success and even showed off his newly-minted gold medal.

Scott, who was also born with spina bifida, told The Republic he always loved sports and “grew up idolizing the Michael Jordans of the world.” Scott said he played pickup basketball with his friends using his daily wheelchair until he received a donated, fully accessible wheelchair that changed the course of his life.

Though the costs of adaptive equipment can be prohibitive for many families, Scott told the attendees on Saturday that he “know(s) what a springboard” it can be. He proceeded to surprise four of the children with fully accessible kayaks built to meet their needs, courtesy of a $40,000 grant given to Arizona Adaptive Water Sports from The Hartford.

The first recipient was 9-year-old Lilye Curtis, whose jaw dropped in shock.

“I didn’t believe it at first,” Curtis later told The Republic. “I thought they were joking, but it’s true. I was about to cry happy tears.”

Curtis has used a wheelchair since she was a year and a half old. Her mother, Jennelle Curtis, said they’d seen flyers for the Arizona Adaptive Water Sports Kids Day at therapy but that they didn’t immediately jump at the opportunity.

“We finally came two years ago and were like, ‘why did we never do this?'” she said.

Jennelle Curtis said she’s “really thankful” for the event’s emphasis on inclusion. Her daughter agreed, saying it “makes me feel good and welcomed.”

And that feeling is what’s most important, Scott said.

Scott was encouraged to participate in the water sports with the kids on Saturday. Though he’d never been kayaking before, he added that he’s not one to back down from a challenge.

‘It opens up doors and changes their life’

Jo Crawford, executive director of Arizona Adaptive Water Sports, said people with disabilities are often told “no,” that certain activities just aren’t feasible for them. She’s proud that her organization can be the one to say “yes.”

That was the case for Ryan Paul Johnson, who broke his neck in a 1999 snowboarding accident. Crawford was his recreational therapist and regularly invited him to events similar to the one held on Saturday, though he said it took him 14 years to take her up on it.

“It really changed my mind and opened my eyes to how much more I could be doing with my life, and all the other great opportunities that I wasn’t taking advantage of because I was really afraid,” Johnson said. 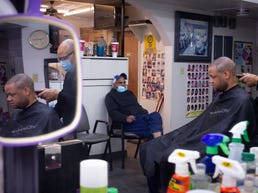 Johnson, who was 34 at the time, said he started doing standup comedy later that same year and called it “one of the biggest gifts I feel like the lake gave me.”

Johnson now serves as a board member of Arizona Adaptive Water Sports, where he revels in the opportunity to see others, particularly younger and newly-injured people, have the same experience.

“I think it’s just exciting to see myself in them or see … their potential and story unfolding,” he said. “That’s probably the best part, just the joy and pure happiness generated in people’s lives. It’s great to see.”