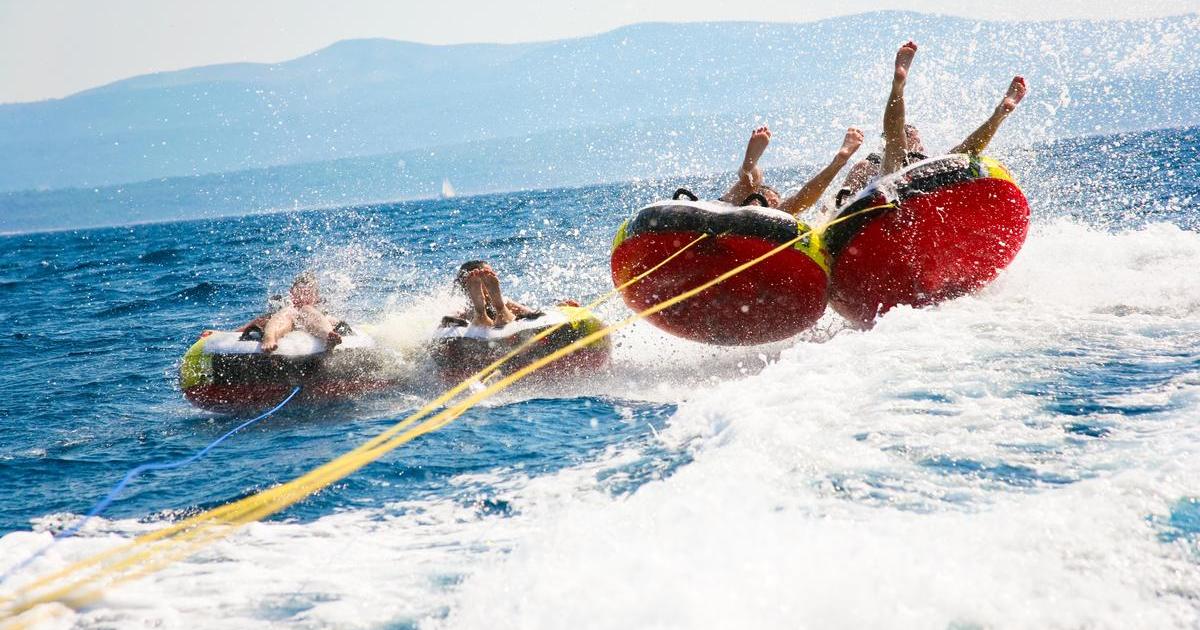 A father whose family holiday-turned-nightmare left him paralysed for life has been awarded close to €1 million in damages.

The phenomenal sum was awarded at the end of an 11-year long civil court case Christine Hannah Burns had filed on behalf of her husband John, a former carpenter from London.

Their holiday had been going well until July 25 when Burns, who was a poor swimmer, decided to join his then 13-year-old son who was eager to take a ride on a ‘Crazy Squab’.

This was an inflatable rubber sofa which was dragged by a 19-foot, 85 horsepower speedboat, taking the riders on a ten-minute circular ride just outside Dragonara Point.

A maximum of four persons could sit side by side on the ‘sofa’, wearing life jackets and gripping handles to hold on tight during the ride.

Weather conditions were acceptable that morning, with a slight to moderate northwesterly breeze.

Father and son were both fitted with life jackets as the boat took off, pulling the Crazy Squab at a constant speed, when a few metres beyond Dragonara Point, the sofa “suddenly jerked and accelerated at the same time.”

Both men were thrown up into the air, before they somersaulted backwards, landing in the water.

“I was thrown upwards, my legs went over my head and there was an impact as I hit something. I found myself in great pain and shock, floating with my face partially in the water,” the father later recalled.

His son had resurfaced unscathed and immediately swam to help his father. The ‘observer’ keeping a lookout on the boat signalled to the driver to stop and turn back.

Luke Curmi, the driver, later testified how they had been going along at “under 20 knots,” since the actual ride had not yet started, when his companion had called out that a person had gone overboard.

The then 48-year old victim was lifted out of the water and rushed to hospital where he underwent surgery, before being transferred back to his homeland on a special flight.

The entire family’s life was drastically changed by the incident.

Burns was hospitalised for a long time and subsequently spent a long time in rehabilitation at a special centre.

But there was nothing doctors could do to reverse the damage caused to his spinal cord, which transformed him into a tetraplegic (suffering loss of sense and control over all limbs).

A magisterial inquiry into the incident had concluded that the boat driver was not criminally liable, as a legal expert had reported that there was nothing to indicate that the ride on the crazy sofa had “not been advisable” that day.

Nor did the driver of the speedboat “contribute in any manner to the accident,” the expert had said, basing the conclusions on evidence available at the time.

But ten years since those conclusions, with more detailed evidence emerging in the civil action for damages instituted by the victim’s wife in 2009, the First Hall, Civil Court, presided over by Mr Justice Francesco Depasquale, concluded that the main responsibility rested with the driver of the speedboat.

His colleague had subsequently testified, recalling how at the exact time of the incident, the boat had been hit by “a big wave”, caused by a passing vessel.

That was when he had spotted one of the riders being flung into the air, then landing backwards on his neck, hitting the sofa before rolling into the sea.

In the light of such evidence, Mr Justice Depasquale observed that it was “clear” that the incident had not been caused by a “fortuitous” event over which the driver had no control, but rather, that he had actually “driven ahead into the big wave” dragging along the sofa which, upon impact with the displaced water, had flung the riders off balance.

The local insurance company, representing American Home Assurance Company, had the right to turn upon the other defendants, in case the liquidated sum exceeded the maximum cover afforded by the insurance policy.

Independent journalism costs money. Support Times of Malta for the price of a coffee.