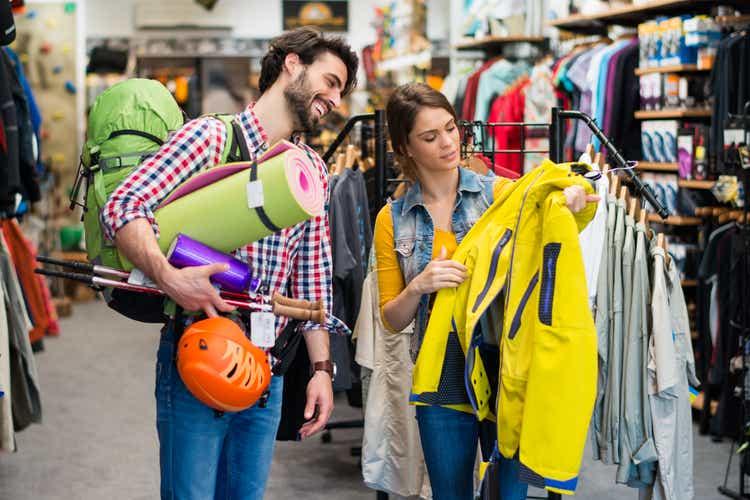 Academy Sports and Outdoors, Inc. (NASDAQ:ASO) has set itself on a strong but conservative growth trajectory relative to other specialized big box stores that saw most of their growth in the 80s, 90s, and early 2000s. By filling in stores in the Southeast and then gradually expanding into whitespace regions to the North and to the West, the company should be able to maintain growth for years, and perhaps decades to come. In my view, the stock looks undervalued right now in relation to its long-term growth prospects. Read more below on why I assign a Strong Buy on ASO stock.

Academy Sports and Outdoors is a sporting goods and outdoor retailer based in Katy, Texas. It has become well established in the Southeast, with 268 stores and 3 distribution centers throughout 18 states. Founded in 1938 as a tire business and then military surplus store, it transitioned to sporting goods in the 1990s. It grew steadily until it just recently went public in 2020. You can read more about Academy’s History here.

Academy falls in the category of specialty big box stores. In contrast to general big box department stores such as Walmart (WMT) and Target (TGT), these specialty big box stores focus their products around a central theme such as sporting goods, home improvement, electronics, or pet care. Typically, Academy stores can be found neighboring many such retailers that tend to pop up in interstate exit areas. For instance, in Jackson, MS, you can find an Academy on the same strip as Hobby Lobby, Lowe’s (LOW), and Best Buy (BBY). In Greenville, NC, you will find one neighboring DICK’S Sporting Goods (DKS), Kohl’s (KSS), and Lowe’s. In Tampa, FL, you will find one just a few hundred feet from Home Depot (HD) on one side and Petco (WOOF) on the other.

Academy has articulated in several earnings reports that its aim is to grow 80-100 stores in the next 4-5 years, an aspiration easily achieved in in-fill locations in its current region. However, the full opportunity size has been identified as 894 stores:

Based on this 894-store potential, I estimated an S-curve to compare to other specialized big box retailers’ growth using the following equation:

where max in this case is 894 stores, initial is 268 stores, and c is adjusted to match Academy’s aspiration as closely as possible – in this case, 0.115.

From this figure, it is easy to see that Academy’s growth prospects are very conservative relative to these other retailers. Academy seems to be assuming a similar entitlement to Dick’s Sporting Goods, but placing itself on a trajectory to take about twice as long to reach that entitlement.

I discounted those projected earnings over 50 years with the average real stock market rate of return of 7%.

The sum of discounted earnings is $201.33, roughly four times the current price of ASO; or, in other words, the stock price is 25% of the valuation, providing a margin of safety of nearly 75%. This makes ASO a strong buy in my view.

Other financial metrics also indicate a very positive picture. Going from $3.79 EPS in 2021 to $7.12 EPS in 2022 represents an 88% growth rate, yet the P/E ratio for ASO is only around 7. Typically, a P/E ratio less than the growth rate indicates that the stock is undervalued according to Peter Lynch’s favorite growth ratio. This is clearly the case with ASO.

Academy’s debt to equity ratio is not bad. Its long-term debt (total liabilities of $3,223,545 minus current liabilities of $1,191,211) is $2,032,334. With a total stockholder equity of $1,558,919, that gives a debt-to-equity ratio of 1.3. Ideally this would come down lower. Peter Lynch in his book One Up on Wall Street explains “A normal corporate balance sheet has 75 percent equity and 25 percent debt… More than anything else, its debt that determines which companies will survive and which will go bankrupt in a crisis” (p. 202).

Brick-and-mortar retail is facing greater challenges than when other specialty big box stores were taking off in the 80s, 90s, and 2000s. Academy’s conservatism when it comes to adding new stores may be justified given the challenges from the pandemic and the general transition to more online shopping. In addition, while Academy’s stated aspiration of 80-100 stores in the next 4-5 years seems very feasible to me, beyond that, if Academy tries to expand its footprint considerably it will have to adapt to differences in regional markets and could face different competition. I plan to cover these factors more in a future article.

There are no indications that Academy is seeking to take off in the same way other specialty big box stores have in the past. However, it has strong financials and a long history of slow and steady growth. If Academy can overcome the broader challenges to brick-and-mortar retail, it has more growth yet to come. Based on my analysis above, this growth potential is being severely undervalued, and long-term investors may want to take a closer look.