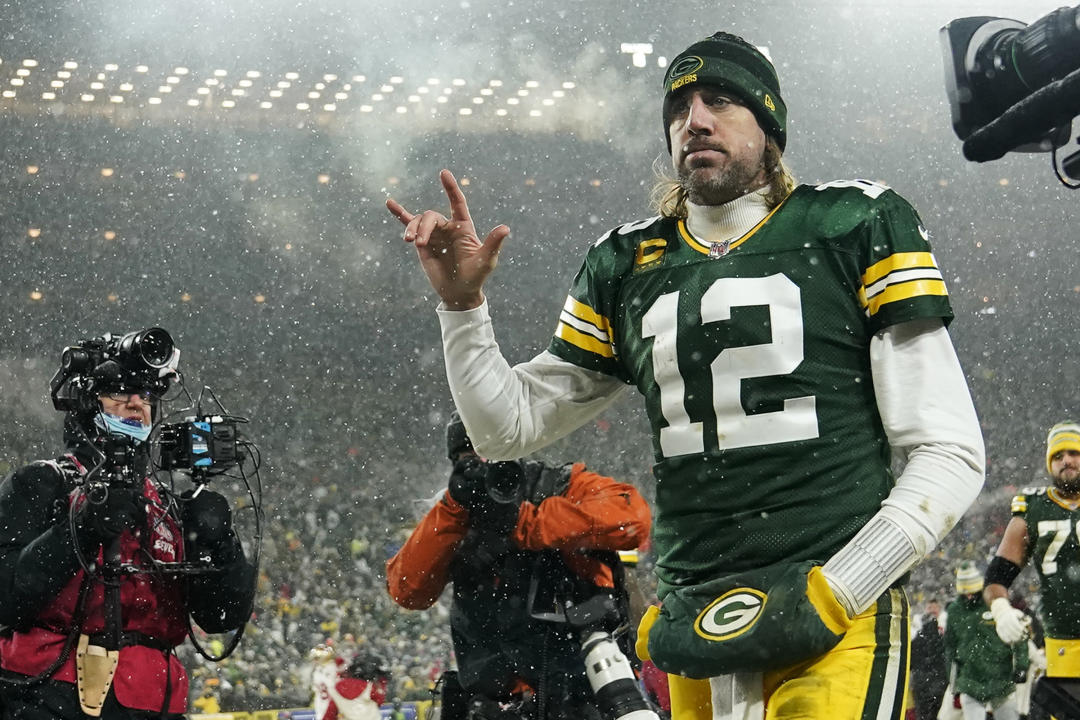 When an Instagram photo series begins with a quote on an artistic landscape, you know it’s about to get good. Add in Aaron Rodgers and social media sends itself into a tizzy.

The Green Bay Packers quarterback put a set of photos he titled “Monday Night Gratitude” on Instagram thanking a large group of people for the “last beautiful year.” It left many to speculate if Rodgers was ready to enter retirement or even leave for a new team in the offseason.

And there were plenty of jokes, many around his rocky relationship with the Packers front office.

At no point in the series of posts and text did Rodgers reference his future plans, but leave it to the MVP to tease out some drama. He often spends Tuesdays on “The Pat McAfee Show” and the host announced Monday a “big guest locked and loaded.”

t did end up being Rodgers, who immediately announced he would have no announcement. He said he had just come out of a 12-day “panchakarma” cleanse and his first thought was “intense gratitude” for those he listed.

Just like Rodgers to raise eyebrows, send Twitter into a tizzy, then leave it there to fester.

Here are the people he thanked and certain speculation it drew.

Rodgers thanks Woodley for ‘incredible kindness’

News broke last week that Rodgers and actress Shailene Woodley reportedly ended their engagement and broke up after more than a year together. It was at last year’s NFL season awards ceremony that Rodgers mentioned a fiancée in accepting his MVP award.

Rodgers, 38, began his post by thanking Woodley. The photo is of them smiling together on a couch with a wood stove and bookshelf behind them.

“Thanks for letting me chase after you the first couple months after we met, and finally letting me catch up to you and be a part of your life. Thanks for always having my back, for the incredible kindness you show me and everyone you meet, and for showing me what unconditional love looks like, I love you and am grateful for you.”

Woodley was absent from this year’s award ceremony and when asked by the NFL Network if Rodgers had any news to share, he said, “No. I’m gonna try and fly under the radar and not make too many waves from this point forward.”

His relationship status with Woodley is still unclear after he spoke at length about her as if they are still together on “The Pat McAfee Show” on Tuesday.

Rodgers’ next thanks went to the quarterbacks and coaches who worked with them every week.

“To the men I got to share the QB room with everyday, Matt, Nathaniel [Hackett], Luke [Getsy], [Jordan Love] and [Kurt Benkert], you guys made every day so much fun and I’m so thankful for the daily laughs and stress relief you brought me every week of the year. I love you guys.”

Later on in the post he also thanked teammates collectively with a metaphor on cake.

“To my teammates, past and current, you are the icing on the beautiful cake we call our job; football. The friendships that we have will transcend our collective time in this game and I am so thankful for the role that each of you have played in making my life that much better. I love you guys, and cherish the memories we’ve made.”

Rodgers pushed for the Packers to bring back wide receiver Randall Cobb in the offseason and the organization completed a trade with the Houston Texans in July to make it happen. The two are close and Rodgers thanked him as part of the “Friday Crew” that would get together on the day to have dinners.

To the Friday Crew, I loved every moment we got to spend together this year. Your love and support was overwhelming, and I cherish the friendships I have with each of you.

He also shared individual photos of himself with each player. And he closed the post with a larger message to anyone he left off:

Spread love and gratitude you beautiful people, and read a book once in a while too while you’re at it. Love and peace.

The book reference could be to the backlash he faced for his bookshelf during an appearance on the Manningcast for Monday Night Football. He does have a book club as well.

The final photo is what has some speculating the end of Rodgers’ days as the Packers quarterback. It’s a photo of Cobb and receiver Davante Adams standing on the sideline during the national anthem. And the spot between them is where Rodgers typically stands, Mike Florio of NBC Sports noted.

It’s from the game at Kansas City that Rodgers missed because of COVID-19 protocols following his positive test — and the fury over his intentionally misleading people about his vaccination status.

Could that mean he’s leaving? Or is he trolling everyone, again? It’s a long offseason.