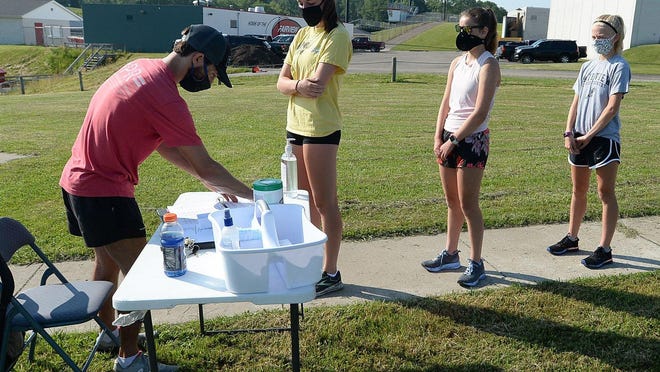 The year 2020 had many interesting sports story lines, but unfortunately, many of those stories were related to the COVID-19 pandemic.

Even though the virus weaved its way into many of the stories, a good amount of sports was played in the winter and in the fall.

Here’s a look at 10 of the top stories from the year (Others could have made the list.):

1. COVID-19 – The pandemic has been tough on the sports world, from canceled events to events with no family or fans. Not only has the pandemic severely affected professional sports, but high school and college sports have taken a big hit over the past year.

In college sports, teams like Gannon women’s basketball, Mercyhurst men’s basketball and Mercyhurst women’s hockey were robbed of competing in the NCAA tournament. It goes the same for individuals competing at the time like swimmers and wrestlers. The college spring sports athletes had their 2020 season taken away, and fall and winter sports teams won’t be able to compete for league championships. The NCAA is allowing athletes an extra year of eligibility to make up for the loss, for those who can take advantage of it.

“It still doesn’t seem real that it is happening. It’s almost like something out of a movie,” said Mercyhurst baseball coach Joe Spano last spring. “It’s very hurtful. I feel horrible for our guys, for our women’s hockey team, our wrestling team and our men’s basketball team to actually be involved in a championship and to lose that opportunity. They’ve earned that opportunity. I feel bad for all the seniors in spring sports, but obviously this is something bigger than all of us. It’s the health of the entire population.”

High school sports were hit hard as well starting with the PIAA basketball tournament ending after the second round and the PIAA Class 2A swimming meet never taking place.

“We’ll head back to the pool and mentally try to train the kids to get ready again,” said Villa Maria swimming coach Sonya Whitman at the time. “I guess the more important thing (about the suspension) is the big letdown emotionally and mentally because it’s a big meet.”

“We are saddened and disappointed to announce the cancellation of this Erie tradition for the first time in its 81-year history,” said Doug White, one of the game’s organizers. “Our main concern is the health and safety of our players, officials and fans.”

High school sports came back in the fall and some college basketball and hockey games took place as well, but nothing is back to ordinary. Some games had fans, some did not, and every game had new health and safety protocols.

While things might eventually get back to normal in the sports world, 2020 will be memorable for plenty of good and bad reasons.

2. SeaWolves stay in Erie – It might have seemed unlikely that Erie would lose its professional baseball team in the middle of a $16 million renovation to UPMC Park, but a leaked list of 42 minor league teams that could lose their affiliation sent shockwaves throughout the country in November 2019. Erie was on the list, which prompted action from the SeaWolves’ front office, owner Fernando Aguirre and local and state politicians to make sure Erie kept its baseball team.

After months of uncertainty and lobbying, Erie was removed from the list at some point, but no changes to the list were leaked to the public throughout 2020, which caused tension for the community. On Dec. 9, the SeaWolves were invited to remain the Double-A affiliate of the Detroit Tigers by Major League Baseball.

“We are thrilled and honored to be invited by the Tigers to continue as their Double-A affiliate,” Aguirre said. “The SeaWolves and Tigers have built a strong partnership, and today’s announcement confirms our commitment to Erie.”

Melvin Crosby won most of his matches by decision, including the state final, a 6-2 win over Tim Samec of West Hazleton.

Dorian Crosby, a Cathedral Prep senior, dominated early on in the 2020 tournament with a fall in 3 minutes, 7 seconds in the first round before another pin in the quarterfinals in just 68 seconds. The Bucknell recruit knocked off a high seed in the semifinals 3-1 before edging Nate Schon of Selingsgrove 3-1 in the championship match.

“Throughout this past (season), my dad kept telling me we can make this history,” Dorian Crosby said. “That was my biggest motivator to get this title.”

“I can’t be any prouder of him in my life,” Melvin Crosby said. “Two state champions in the family! Oh, yeah!”

4. Jeffress leads Trojans on PIAA quarterfinal run – The hype for William Jeffress reached a fever pitch when he entered the seventh grade and started for the McDowell freshman basketball team. As a freshman, he became an immediate impact player for the McDowell varsity basketball team. This past winter, the 16-year-old who reclassified from a junior to a senior to graduate early, became the all-time scorer in McDowell history.

On Jan. 24 against defending state champion Kennedy Catholic, Jeffress scored 22 points in a 65-53 win. He increased his career total to 1,437 to pass former McDowell star Sean Smiley’s total of 1,426.

“It means a lot to me. I want to thank my family, my coaches and my teammates because they’ve believed in me all along and that has made all the difference,” Jeffress said. “My biggest goal is to help win a state championship.”

Jeffress nearly had a chance to play for a state championship, but COVID-19 forced the end of the PIAA tournament in the quarterfinals. McDowell was set to play Butler in the quarterfinal round when the pandemic ended that dream. Jeffress, a 6-foot 7-inch guard, finished with 1,673 career points and is currently a true freshman for the Pitt basketball team.

North East beat powerhouse Greensburg Central Catholic by six strokes. Lydia Swan shot a 3-under 69 to lead the Grapepickers. She became the first golfer in PIAA history to win an individual state title and to be part of team state titles for both boys and girls teams. Anna Swan helped out with a 4-over 76 and Taylor Urban shot a 96.

Cathedral Prep also battled with a 13-over team round to edge Unionville and Liberty by five strokes. Zach Henry led the Ramblers with a 1-under 70 followed by Breckin Taylor with a 71 and Evan Rowane and Mac Deitrick each with 78s.

“I’ve been involved with some of these guys and their families for years,” said Prep coach Jay Willow. “We’ve been talking all year that we have some unfinished business to take care (at York). This (victory) is what we’d planned on all year.”

If two team state titles weren’t enough, North East’s Isaiah Swan added an individual state championship in thrilling fashion by winning a playoff hole to edge Matthew Tressler of Scranton Prep after both shot a 2-under 69.

6. Gannon women’s basketball wins PSAC – Expectations were extremely high for the Gannon women’s basketball team last season. Not only did the Golden Knights have a strong, experienced team returning, but it was also the return of popular head coach Cleve Wright. He had been a successful coach for Gannon, which led to a Division I job at Miami (Ohio), but Wright returned to Erie to take over the program for a second time.

The Knights won 25 games and made an incredible run through the PSAC tournament to win the conference title. After beating Edinboro 67-53 in the quarterfinals, Gannon knocked off powerhouse Shippensburg 74-58 in the semifinals to set up a tough final against nationally ranked IUP. Tori Obenrader had 17 points and 16 rebounds as the Golden Knights shocked the Crimson Hawks 50-40.

“I don’t know if I can sum it up, but this is a really special group that cares about each other,” Wright said. “As a coach, you want this really bad for them, and I’m so glad they went and got it.”

Gannon earned a spot in the NCAA Division II tournament, but the tournament was canceled the night before the Golden Knights were to host the first round because of COVID-19.

“The worst thing we can do right now is not try,” said PIAA executive director Bob Lombardi.

The PIAA watched as neighboring states like Maryland, West Virginia, New York and New Jersey all delayed fall sports. The PIAA board members, however, mentioned if they didn’t at least try, we might not have sports the entire school year.

The regular season started in September for all sports, and there were a few shutdowns over COVID-19, but every team was able to play most of its season. One of the biggest doubts was finishing a football season, which was planned to last until Thanksgiving.

Several District 10 teams benefitted from the PIAA’s willingness to push forward with football. McDowell reached the PIAA semifinals before a loss to Central York, and Cathedral Prep and Wilmington returned to Hershey before losing in the state finals.

8. PSAC, AMCC cancel most fall, winter sports – One of the toughest blows to colleges and universities trying to play sports was the testing regulations sent down by the NCAA. The organization wants teams to test three times a week during the season, which is proving to be cost prohibitive for many schools. While Gannon and Mercyhurst have scheduled basketball games, most schools around the PSAC are planning to just practice and maybe play a game or two without playing a full season.

It was the same for the AMCC, which will allow some fall sports to take place in the spring, but men’s and women’s basketball will not have conference play or championships.

9. OHL, G League struggling to play seasons – Both the Erie Otters and the Erie BayHawks had their 2019-20 seasons cut short because of COVID-19. At the time, in late March, there was uncertainty, but it didn’t seem like a threat to the 2020-21 season. Nine months later, neither team has started the 2020-21 season.

The OHL had planned on starting in February, but with border issues and a surge of COVID-19 cases in Ontario, the league has delayed the season.

“The date that we had set was pretty lofty for us to hit,” said Dave Brown, Otters general manager and vice president of operations. “Going into the holiday, we thought it was in the best interest to address the elephant in the room and reset the date.”

While the OHL tries to work out how to have a season with teams in two different countries, it appears the G League will have its entire season in a bubble.

With both leagues struggling to figure out how to have seasons, it appears Erie Insurance Arena could be quiet for the foreseeable future.

The Lakers picked up their 20th win by defeating Penn State 4-1 in the CHA semifinals before outlasting Robert Morris 2-1 in overtime to win the league title. Summer-Rae Dobson scored in overtime to not only give Mercyhurst its 15th league championship but a spot in the NCAA tournament as well.

The NCAA tournament was eventually canceled over COVID-19, but the Lakers ended the season with a league championship.