A Grip on Sports: The weekend looks promising in the world of sports but then again, so did last weekend 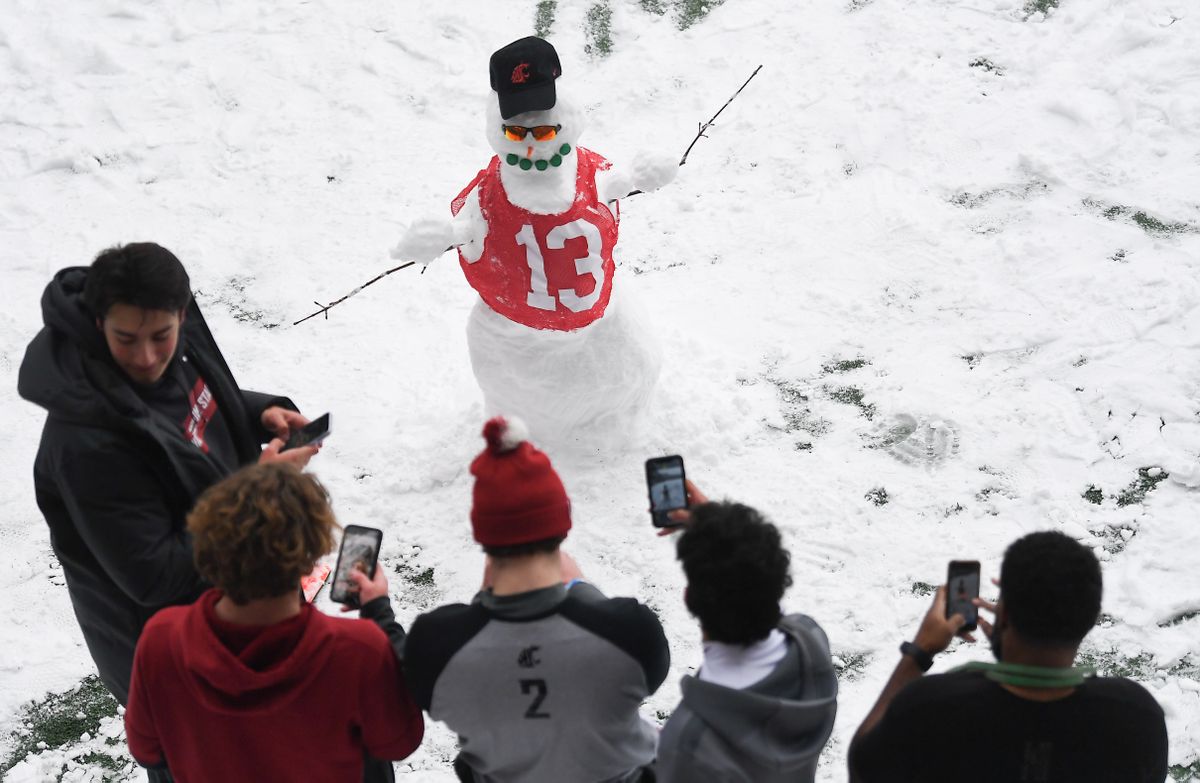 A GRIP ON SPORTS • Most Friday mornings we peruse the weekend TV schedule and highlight what we feel is the best sporting events on the docket. We will do that this morning as well. But after getting toasted a few times lately, we also think we need to add one word to each description. That word? Tentatively. Too often lately events have been pulled at the last minute, due to a positive COVID-19 test or testing protocols.

• Remember last Saturday morning? Yes, I know. This year it is hard to remember which day was Saturday, let alone what happened. We will make it easy for you. It was the morning you were looking forward to watching Washington State play football against California. Now you remember, right? 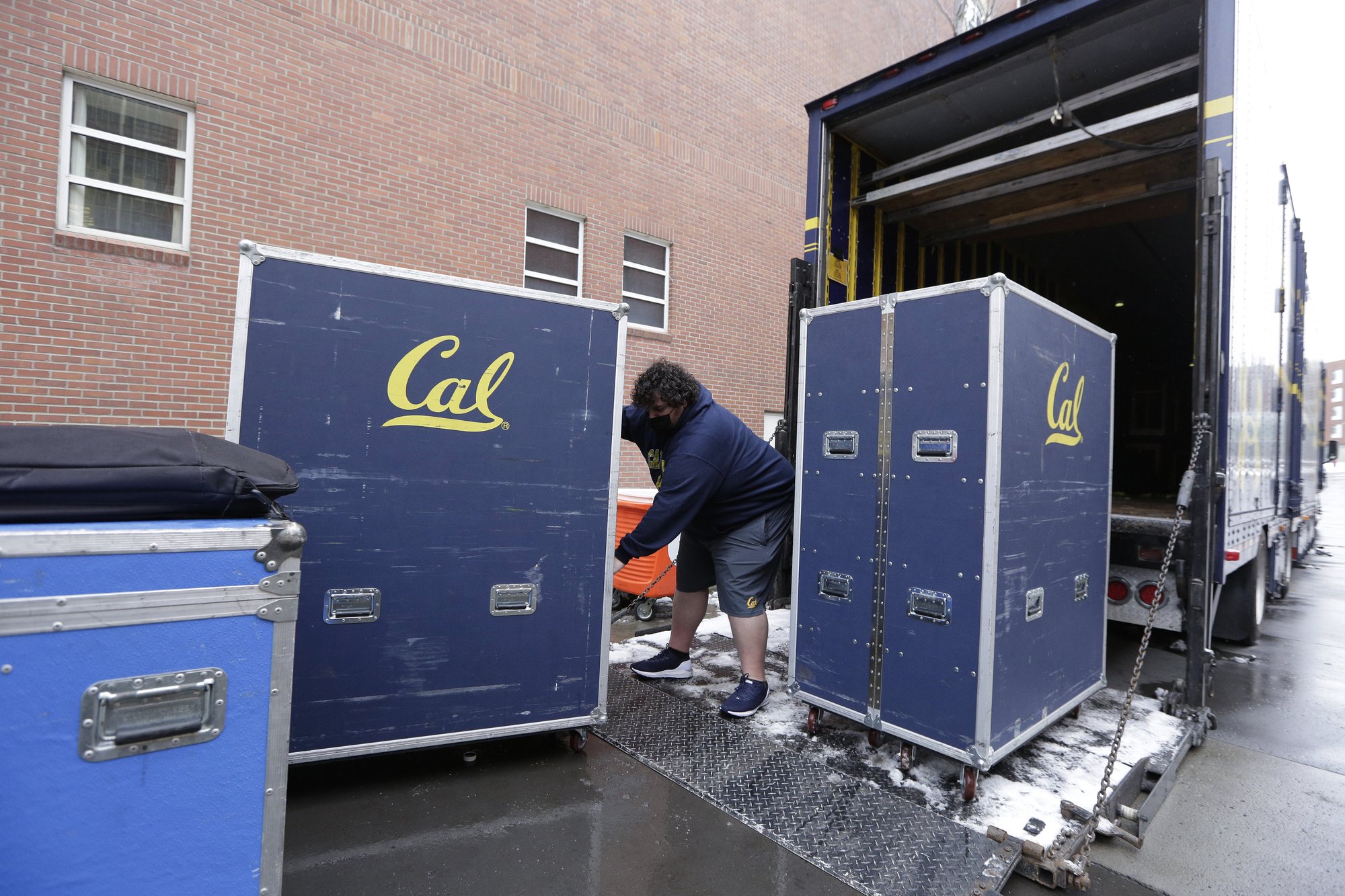 Heck, the Cougars had even taken the field, preparing to play as the game was canceled. One minute it was on, the next the equipment guys were shuffling around, heads down, putting away the gear.

The game had been one of our highlighted events from the Friday morning column. Thankfully, no one invoked the specter of a columnist’s curse, mainly because no one has ever invoked the specter of a columnist’s curse. But if there was one, it’s probably in play tonight. After all, I’m pretty sure there is someone in the mountains of Colorado who has put a spell on the Pac-12 title game. That made-for-TV-revenue game is on the Fox schedule for tonight at 5 p.m. And it doesn’t include the teams with the two best records in this truncated conference season.

Because, you know, why should it?

Pac-12 commissioner Larry Scott feels bad for the University of Colorado football team. (If you don’t know, the Buffs will not be playing this weekend because they had to be on-call in case USC flunked a test or two. But isn’t Scott aware no one ever flunks a test at USC as long as the tuition bill is paid in full? And that, my friends, is an example of UCLA humor, courtesy my sister.) That doesn’t mean, however, the commish thinks his conference hierarchy made a mistake. No sir. Everything is fine in San Francisco, thank you. Though, darn, USC should be getting more consideration from the College Football Playoff committee.

(As an aside, read this column from Brian Howell in Boulder. Afterward, if you don’t believe the conference shouldn’t cut ties with Scott, I’m not sure you belong on this site.)

If you would rather ingest your sporting events on the radio (or watching on Pluto TV, which recently was restored to the online listings of planetary channels), then you always have a shot of listening to Larry Weir play its Big Sky-opening basketball game at Northern Arizona. That is, of course, if the Eagles play at all. It seems ominous the game was changed yesterday to a later time so that more testing could be completed.

Speaking of such things, No. 1 Gonzaga has lost a high-profile matchup before to a late-test result, so Saturday morning’s game with third-ranked Iowa – in South Dakota – needs your help. Please keep your fingers crossed between now and tomorrow. Thanks. If the game comes off, it will tip at 9 a.m. (PST) on CBS.

Haven’t we heard that before?

That matchup is the best of the weekend, college basketball division, though maybe not the best college sporting event. For that, we could offer either SEC football title game (No. 1 Alabama against over-rated-no-matter-the-number Florida) on CBS at 5 p.m. or the ACC championship (No. 2 Notre Dame vs. No. 3 Clemson) on ABC at 1 p.m. Hopefully there will be at least one upset tomorrow, though it might be hard to follow seeing how crowded the schedule is (pre-testing, of course). The one I would like to see? Northwestern knocking Ohio State, and the College Football Playoff committee, for a loop. (There are personal reasons for enjoying watching the Buckeyes lose, but we won’t dwell on them here.)

Sunday is, as it is most weeks, dominated by the Seahawk game. Luckily, this week the Northwest’s team is on the East Coast, playing at 10 a.m. against the Washington Football Team. There is a curse on Fed-Ex Field, placed there I believe by John Wilkes Booth’s uncle (a big Carolina fan), so don’t be surprised if the Hawks struggle against an NFC East team again.

Looking through the TV schedule for the weekend, there is something so odd about having so many options of college and pro sports to watch considering what’s going on the world. Comforting, too, sure. But odd. What would really be odd, however, is if they all take place.

WSU: The Cougars will host Montana State tonight in a nonconference basketball game. Theo Lawson looks at a Cougar who has yet to score this season but seems to be an important part of why they are 5-0. … College football coaches meet a lot of people in their recruiting travels. So it should come as no surprise Nick Rolovich has a story about the Sewell family. Theo has that and more in this feature. … This story from The Athletic about Michigan State’s Malik Hall is worth reading. And not just because his dad was once a Washington State (and Eastern Washington) assistant basketball coach. No, there is more to it than that. Much more. … Around the Pac-12 and college football, it may not be the best matchup the conference could have put together but No. 13-ranked USC will meet Oregon tonight in the Coliseum. The winner will be the conference champion. Yep, the Ducks can win the Pac-12 football title without having won their division. Just another example of why college athletes are professionals in everything but their paycheck. … Larry Scott met the media yesterday. He’s positive the Pac-12 is a success. Anyone agree with him? … You know who is a financial success? Mario Cristobal. Oregon has given the football coach a new six-year, $27.3 million contract. Oh, by the way, the Duck athletic department may lose up to $60 million this year. … A Washington receiver is in the transfer portal. … Oregon State is dealing with injuries as it faces Arizona State. … Another Sun Devil is in the transfer portal. … A Colorado linebacker is having a stellar season. … Can the same be said about Utah? The Utes were happy with the recruiting class but Kyle Whittingham says they will add more signees in the spring. … Even if UCLA wins Saturday against Stanford, the Bruins won’t be bowling. … Has Arizona made its coaching choice? Its starting quarterback has decided to leave. … In basketball news, Oregon had to work hard to put away USF at home. … Colorado has received a boost from a freshman. … So has Utah, among other players. … Arizona’s NCAA infractions case will be decided by the independent review process. There is no appeal of the decision. 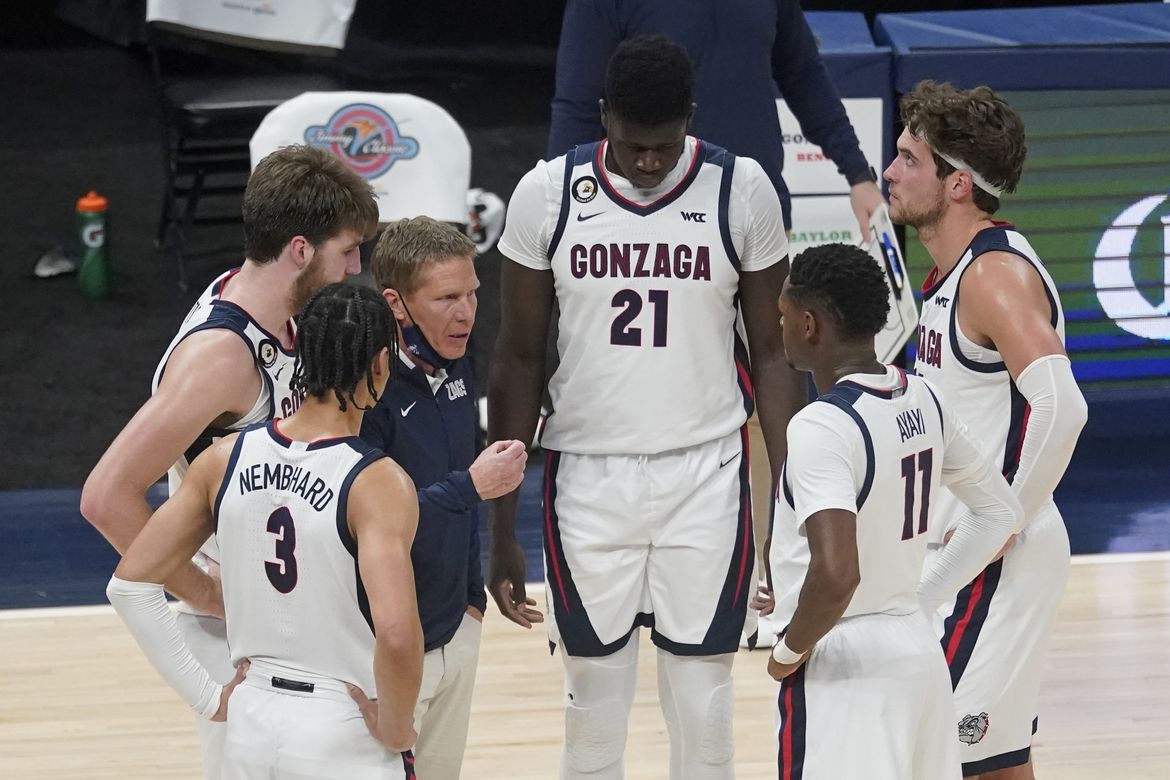 Gonzaga: The Zags probably won’t be at their best tomorrow morning, after a two-week layoff that included little in the way of team practices. But as John Blanchette writes and Mark Few acknowledges, everyone has challenges this year. … This news dropped yesterday in time for us to add it to our column but Jim has more info about the Zags’ upcoming matchup with Virginia. … Jim also covers the news recent signee Ben Gregg will graduate high school early and join the GU team. … Elsewhere in the WCC, Loyola Marymount “somehow” held off UC Irvine for a home win. (I guess it’s time to admit there will not be an NCAA postseason for my alma mater.) … BYU can’t clinch a spot in the NCAA Tournament this weekend, but the Cougars can help their chances with a win against San Diego State tonight. … USF has its signature win (over Virginia) but hasn’t played as well lately. 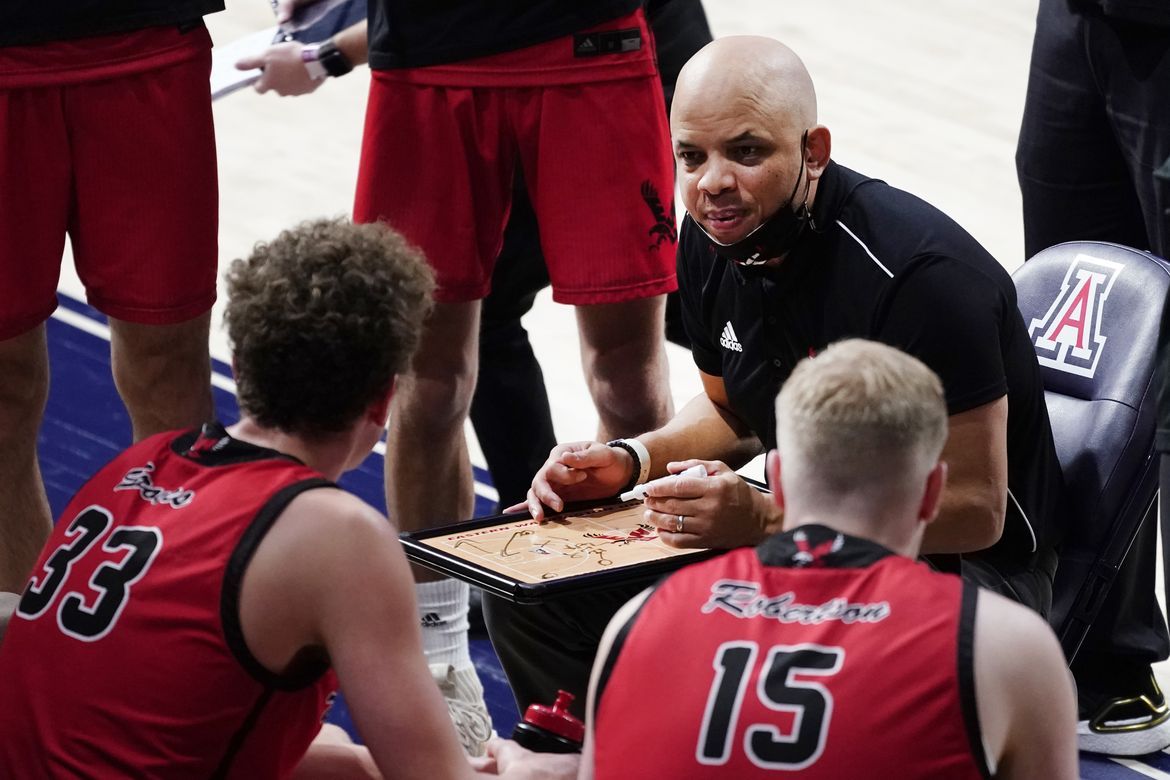 EWU: It’s been a tough haul for the Eagle basketball team to get to the Big Sky schedule. Ryan Collingwood talked with coach Shantay Legans about the games, the cancellations, the tests, everything, as part of his preview of today’s matchup at Northern Arizona. … Larry Weir spoke with football coach Aaron Best as part of the latest Press Box podcast. … Around the Big Sky, Idaho State picked up a win Thursday. … So did Southern Utah.

Idaho: The Vandals’ football signing class didn’t have huge numbers, but the ones who did sign have enough potential talent to earn UI a high ranking.

Preps: A group of Eastern Washington smaller school athletic administrators and coaches have written a letter asking Gov. Jay Inslee to lighten restrictions on high school sports. Dave Nichols has more in this story. … Dave also has a story on a couple local football players who earned an All-American designation. There were academics involved.

Seahawks: It took the Hawks a long time to pull the trigger on drafting DK Metcalf. But everyone involved is glad they finally did. … Duane Brown is healthy again. And also one of the NFL’s best left tackles. … Other key players are not as healthy. … Who is going to win this week?

• After deep and contentious negotiations that included at least two texts, it has been decided I will be writing my TV Take Saturday concerning the Gonzaga/Iowa game. If it is played, of course. As college basketball games take an hour or so less than football games, it is a financial windfall of sorts for this guy. And then I can switch to the Cougar game and listen to Kim yell at the screen. Until later …