FAI has ratified 4 Paragliding records by a young French pilot Timo Leonetti who on August 9, 2022 beat “Distance over a triangular course” of 313,6 km with “Speed over a triangular course of 300 km” with 29,5 km/h and both in World and European category thus superseding Max Pinot’s flight of 308,9 km with a speed of 28,6 km/h. We have contacted this 19-year-old pilot to find out more about this flight and his life in paragliding.

How long have you been doing free-flight sport?
I did my first little flight alone almost 12 years ago when I was 8.

What made you begin?
My parents are both paragliding instructors and have a flying school in Corsica. That is why I could begin at this young age.

Where did you learn to fly?
I started to fly in Canoa Quebrada in Brazil in the dunes. With my parents teaching.

Who were the people that inspired you in your life and sport?
My parents always inspired me in their way of living and sharing life. A lot of pilots inspire me. Here few of them: Rafael Saladini, Veso Ovcharov, Honorin Hamard, Michael Sigel… 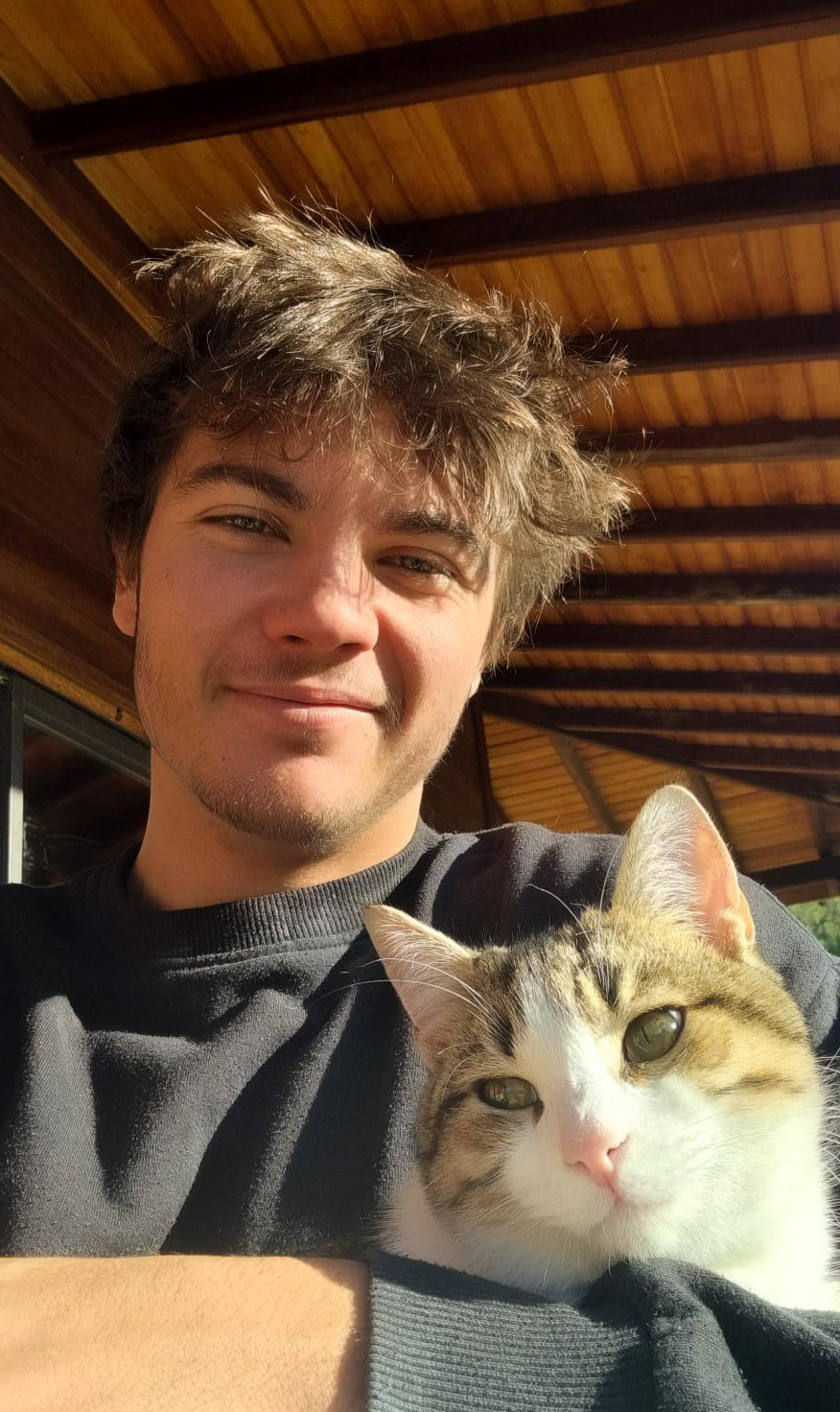 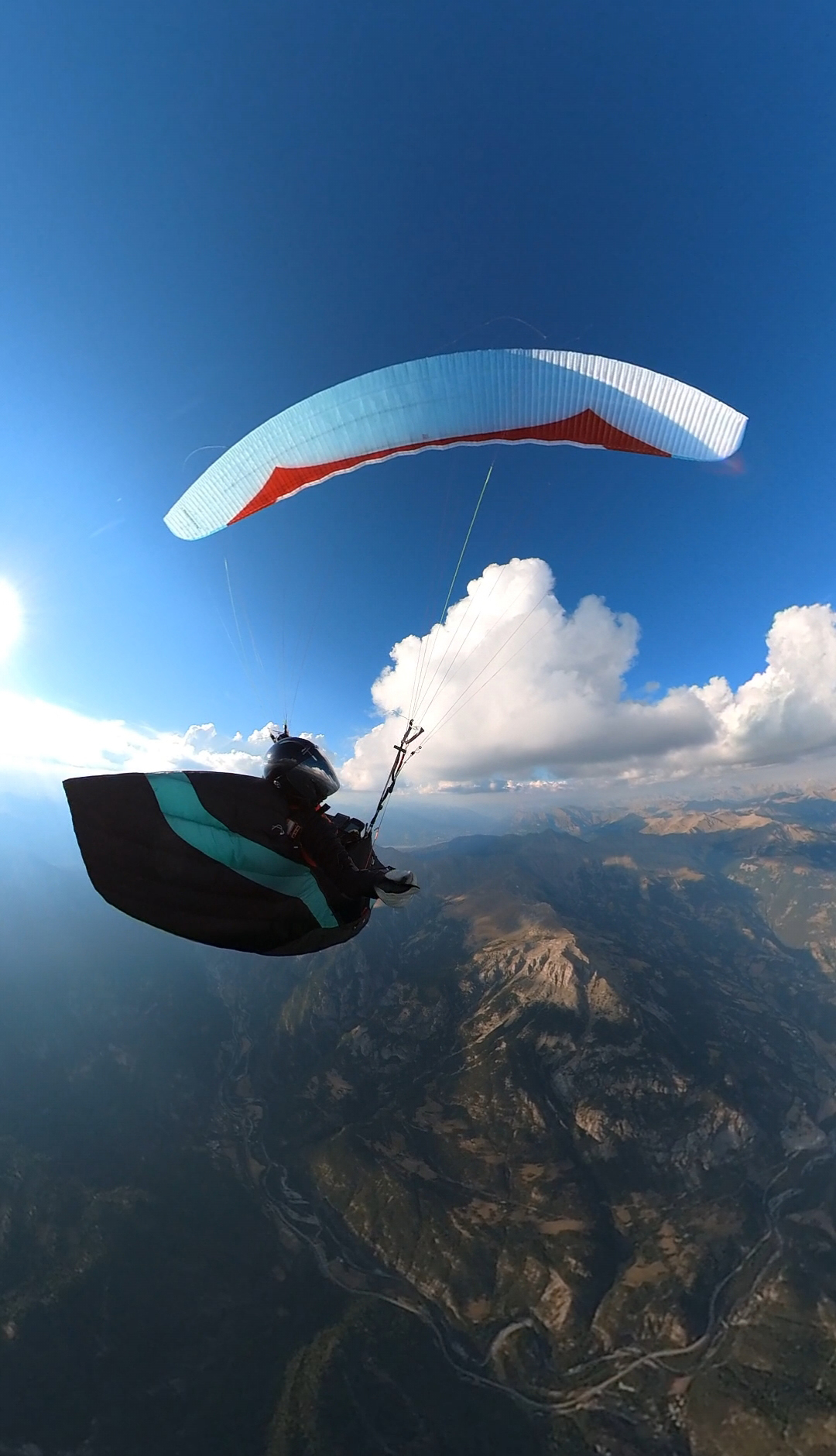 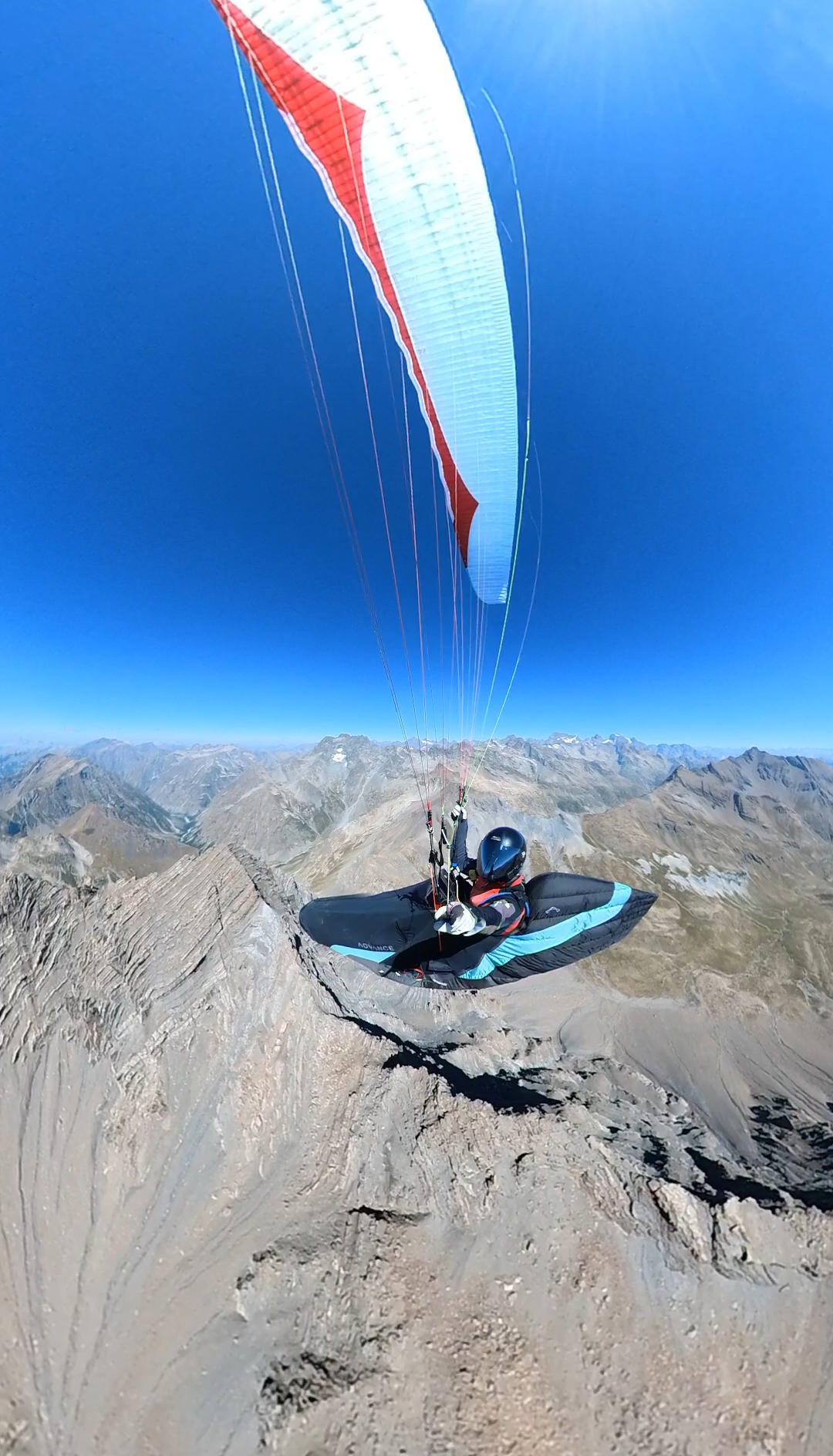 Why did you decide to break that very record in that very place?
After flying 3 times 300k triangle from Col Izoard I thought that this record could work very well from this place and that I could have a chance to break it before the end of the season.

What flying conditions make your record different from the previous one?
Summer conditions on the southern alps can be strong. With long daylight, good climbs, and a high cloudbase.

How long have you been flying in this area?
I started to fly in the southern alps last year in 2021 but this year was my first time flying in the Queyras and the Baronnies.

How many failed attempts have you made before you set this record?
It was my first time attempting those records. No failed attempt.

Who worked with you during preparation?
My FAI observer Charles Cazaux helped me a lot with the preparation. As well as my mentors and friends Mathieu Dequillac and Olivier Faure who helped on planning and assisted me to get a day off to go flying the world records instead of working at the paragliding school.

Have you launched alone or in a company? How far have your companions managed to fly?
This day I launched with friends: Fabian Buhl, Melissa le Neve, Eliot Nochez, Édouard Potel, Flavien Meffre Pesalovo, and François Montuory. Some did a straight line to the north and Édouard did also a big 300k+ FAI triangle.

Tell us about the flight, launch method, your speed, wind speed, thermal strength, etc.
The take-off is quite complicated at Col Izoard and on this day there were a lot of pilots in this small place. I missed a take-off and after that, I got a lot of knots in my lines, at one moment I thought I will not even be able to take off. But after 20 minutes of work, I could get in the air. I was the last one to take off on this day and I was really stressed at the beginning. After I got over my stress I kept the cold head flying at my rhythm, not too fast but trying not to do mistakes or stupid choices. Conditions were perfect with almost no wind in altitude, only a strong breeze, and the climbs were good, up to 5m/s in the afternoon. As always I did some low points in the breeze around Motte du Caire but nothing too sketchy. Did my highest base in the afternoon in the Blayeul. In the morning in the Queyras and passing the Écrins I also was high.
https://www.xcontest.org/2022/world/fr/vols/details:Timoleo/9.8.2022/07:53#joint_flights=all

Was there a moment when you thought you will not set a record?
Once I have passed the sketchy moment trying to take off and I could enjoy the flying conditions, I never thought of aborting, I just flew like I know, enjoying the moment. I thought, let’s see at the end of the day what it brings. 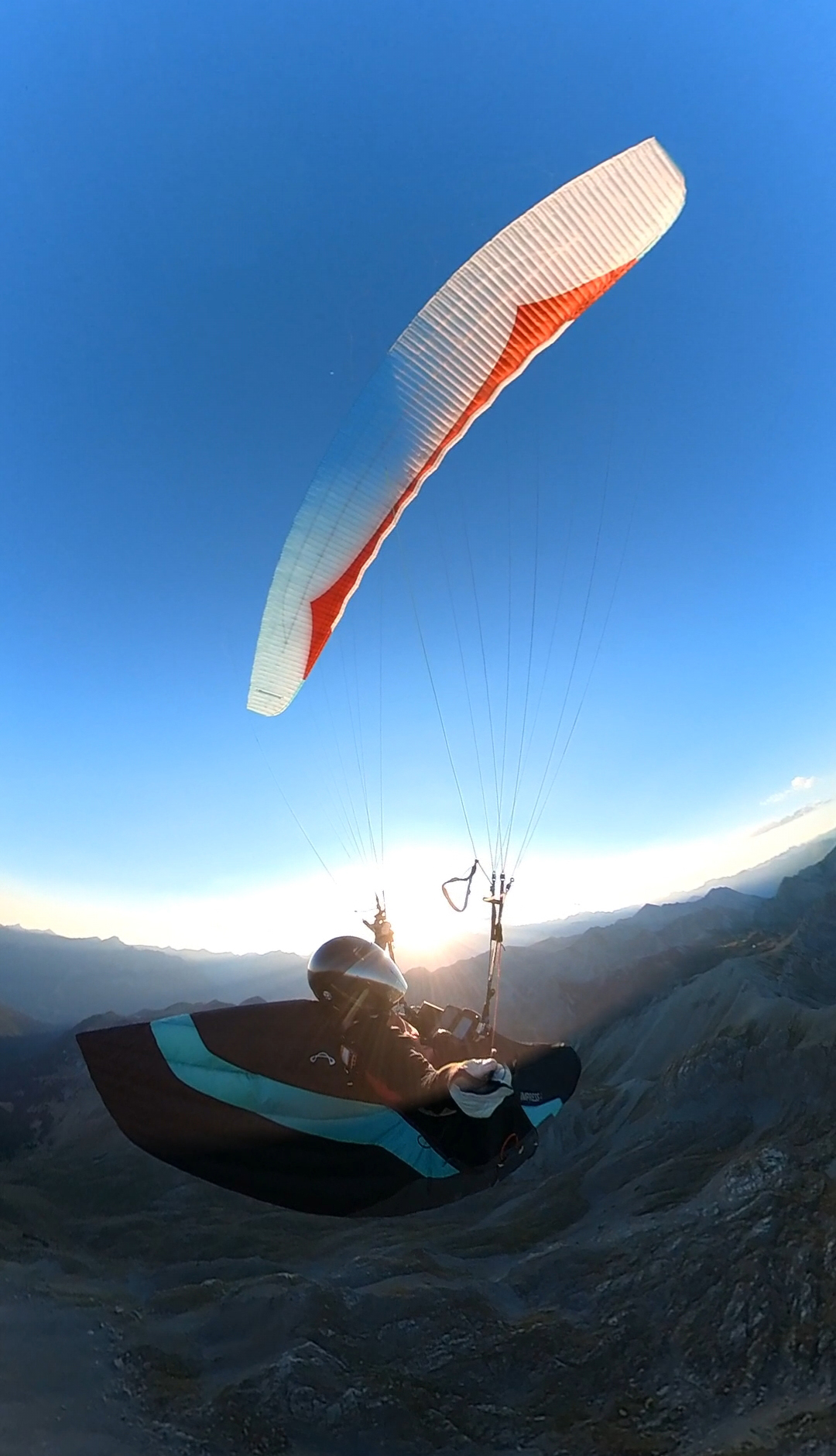 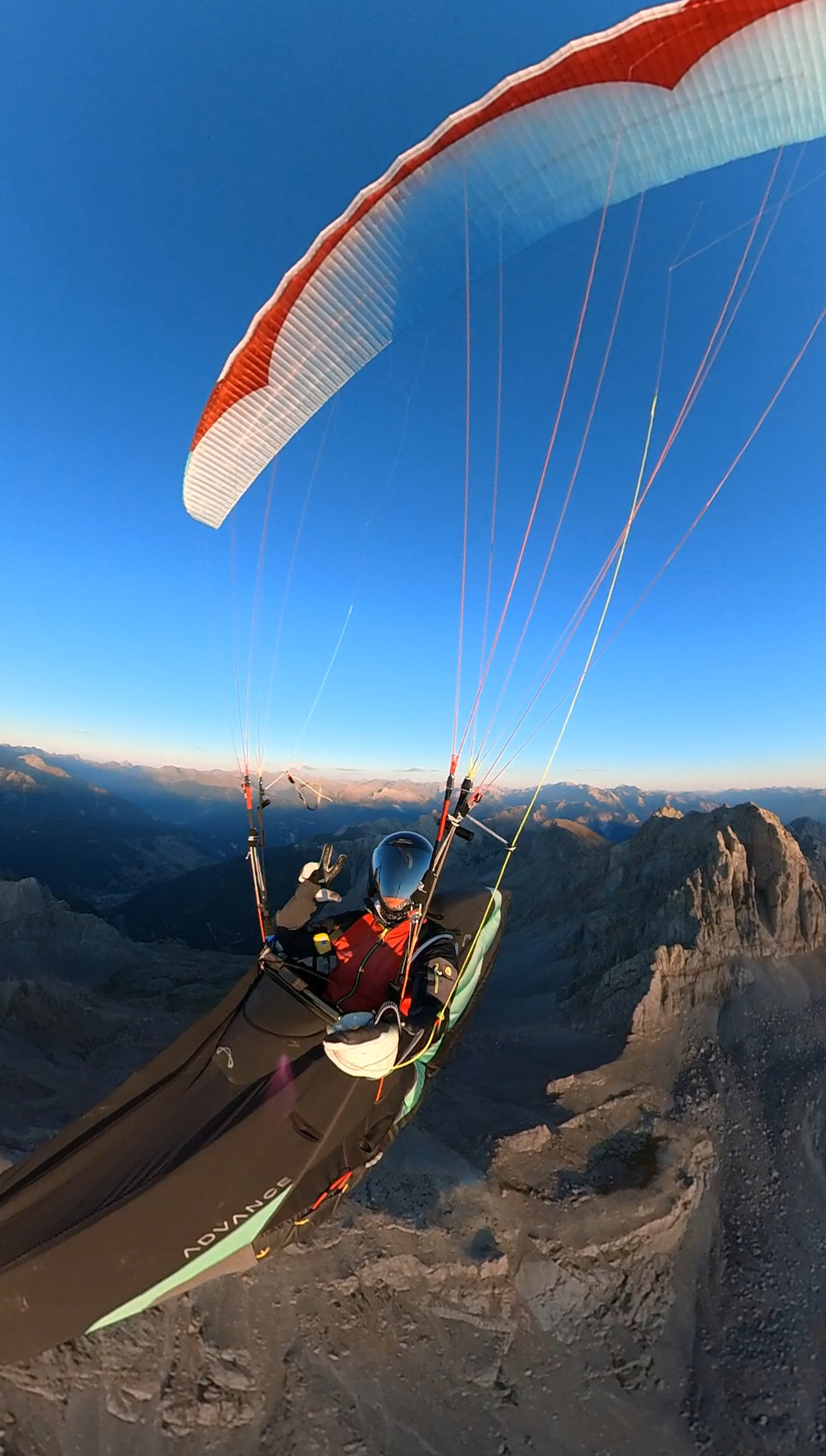 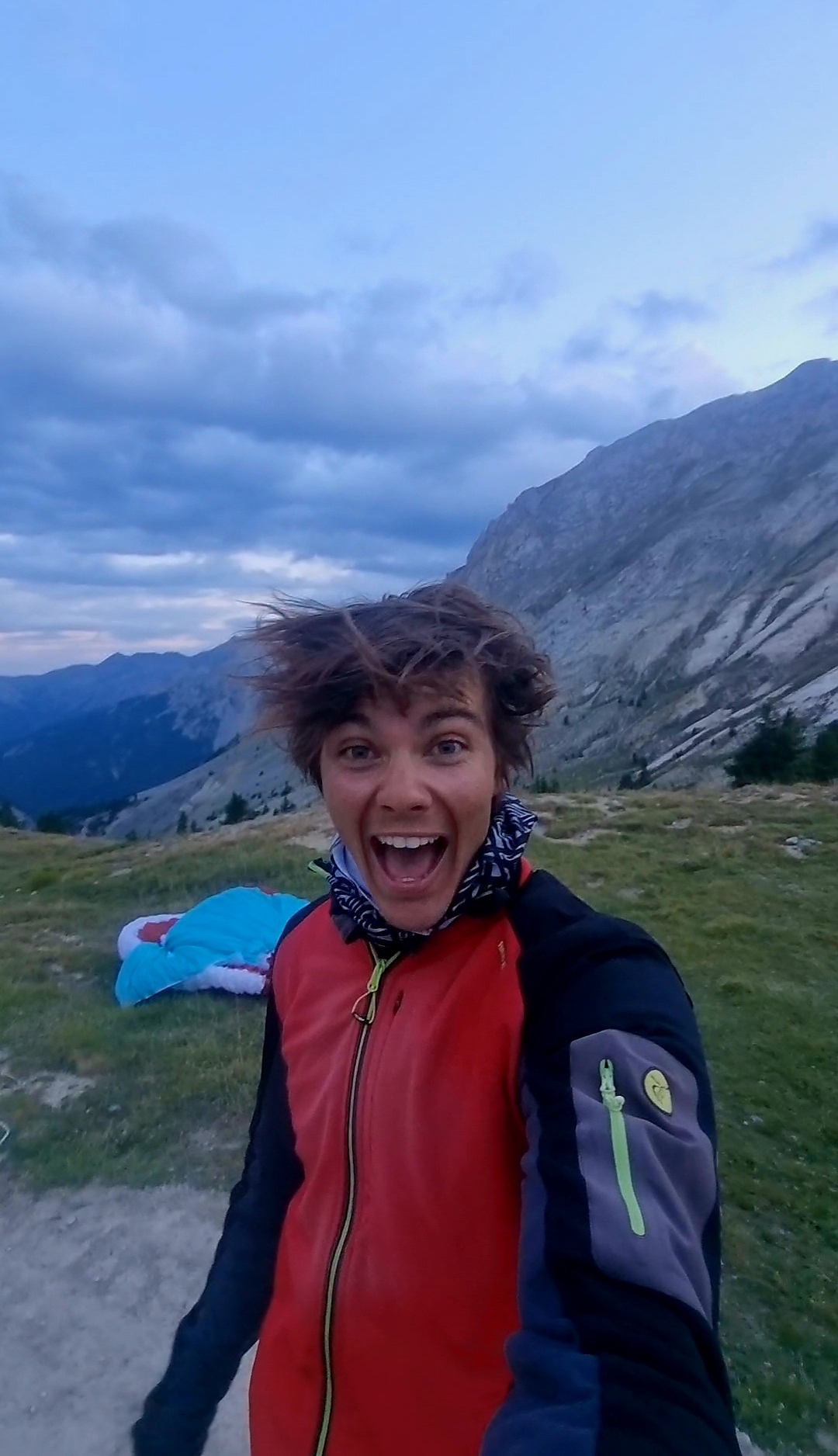 Was there something thrilling?
The moment that moved me most was at landing when I realized that I had done two world records. A lot of emotions, a few tears, and immense happiness and gratitude.

What were you eating and drinking during the flight?
I drank water ( around 2.5 liters) and 3 Cliff bars.

How did you celebrate the record? Who was the first to congratulate you?
My parents were the first to call me as soon as my feet touched the ground, gloves in, and helmet on! I first celebrated just after the flight, eating a pizza and drinking wine with Édouard at Guillestre. Then the next days with my friends. And now that it is official, I keep celebrating it!

What is your next goal to achieve?
I would like to get into some competitions, keep chasing records, and for sure enjoy life.

Any advice to pilots, interesting notice, or some share of experience that you gained while breaking this record?
Believe in yourself, stay safe and when the time is right, success will come automatically.