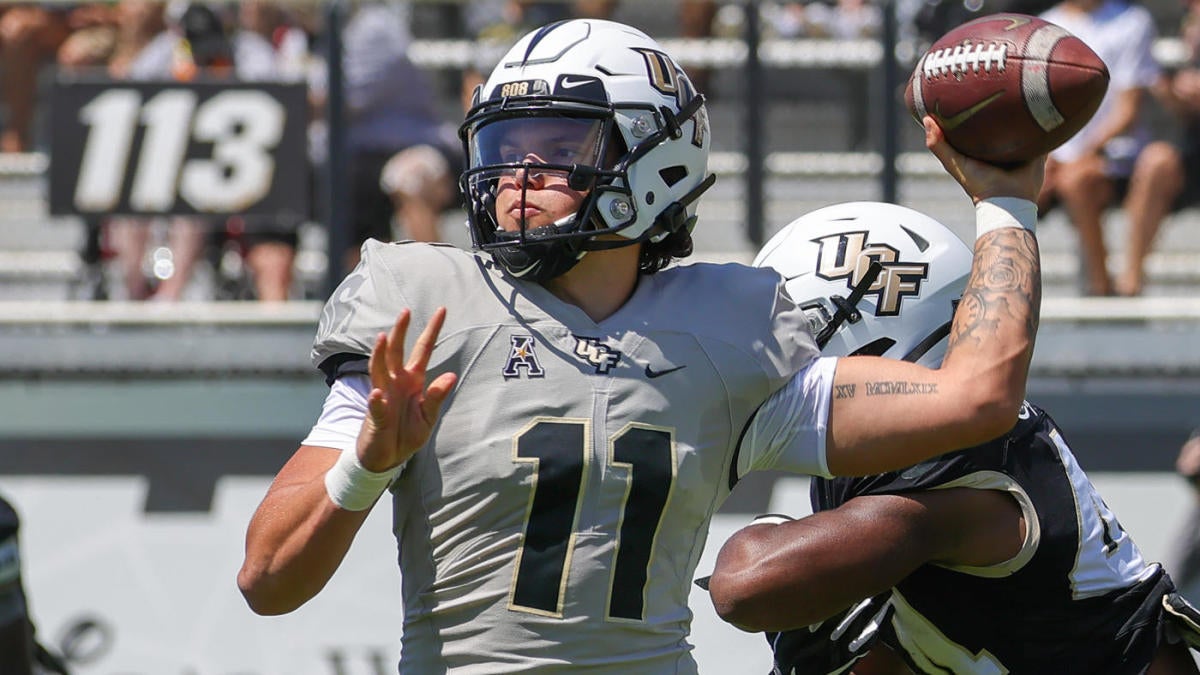 The 2021 spring game season is in full swing, with Saturday providing yet another set of intrasquad competitions across the country in college football. The real purpose and advantage of the spring game varies from program-to-program, but there’s always some questions to be answered and takeaways to be had once the public scrimmage has concluded. Some teams opt for a true scrimmage while others do a more controlled, situational game that closely mirrors practice, but every fan is glued in to see how the team is looking at the end of spring practice.

Saturday’s spring game action was headlined by Gus Malzahn’s first time on the sidelines as UCF’s coach, Florida State wrapping up its first uninterrupted spring practice with second-year coach Mike Norvell and an experienced NC State squad showing off an offense that has its presumed starter back at quarterback. Let’s take a look at some of the headlines from the day.

I’ve been guilty of poking fun at the trickeration wrinkles Gus Malzahn will build into an offense. Expanding on the misdirection that is his bread-and-butter, Malzahn has been known to use unique personnel or extra-action plays to try and catch a defense off guard. Now, while I understand that spring games have long been used to break out trick plays for the entertainment of fans and the players themselves, let’s take a look at two spots from UCF’s spring game.

When Malzahn had Nick Marshall as his quarterback at Auburn, he built in calls for Marshall to be used as a receiver in both 2013 and 2014. At UCF, he has inherited one of the top quarterback talents in the sport in Dillon Gabriel, and while Gabriel can light up a defense with his arm, he’s also a strong enough athlete to make plays in space with his legs. So it’s no surprise that Malzahn has a pass back to the quarterback in the offense, and that Gabriel was ready to follow his blockers for a chunk play.

The next trick play of note comes from the classic “big man touchdown” book, with 6-foot-2, 285-pound defensive lineman Kalia Davis playing the role of wildcat quarterback. According to UCF’s official Twitter account, it appears the formation might be called “wild rhino” and Davis himself promised that next time it would be a touchdown.

One more note from UCF’s spring game: The Knights are leaning all in on a branding the program as the “future of football” and on Saturday that included having the players’ Twitter accounts on their jerseys. Some schools have been putting players’ Twitter accounts next to their names and information on the official roster in the game notes, but this is certainly taking it to the next level.

While UCF was showing off its new coach with an established quarterback, former Knights quarterback McKenzie Milton was making his much-anticipated competitive debut at Florida State. Milton’s long recovery from a catastrophic leg injury in 2018 has been one of the slow-burning stories in college football with positive updates at every turn but no on-field evidence for fans prior to Saturday’s spring game. Last we saw Milton, he was one of the top quarterbacks in the country running a high-octane offense for UCF, so to see him step into an up-tempo attack for Mike Norvell and execute at a high level suggests we might see some real progress on that side of the ball in 2021. The causes for Florida State’s struggles over the last half-decade can be shared across multiple position groups, but the lack of a game-changing quarterback has been among the most noticeable limitations. If Milton can be healthy, sharp and productive–  even just within the system — it’s going to be a major upgrade for the Seminoles.

NC State had one of its best seasons under Dave Doeren in 2020, which speaks to the strength of the program considering the team underwent an early season COVID-19 pause and some significant injury issues once the season got underway. Most notable was the season-ending injury for starting quarterback Devin Leary. He already had a delayed start to the season, but he had eight touchdowns to just two interceptions when he suffered a broken fibula against Duke in October. The biggest headline of Saturday’s spring game was seeing Leary back on the field, and he mostly showed a return to form leading five scoring drives in the first half.

There was an interception and a few missed throws early in the game, but Leary finished with two touchdown passes of his own, including a 58-yard score to Porter Rooks and a red zone toss to Thayer Thomas.

“The thing I like about how Devin is playing is he’s just comfortable right now,” Doeren told 247Sports after the game. “He knows the system. His eyes are in good places. He’s communicating well. He’s making quick decisions. He’s doing what [offensive coordinator Tim] Beck wants him to do. It’s just fun to watch him in his progression from last year to this year.”

Unfortunately the day did not conclude without a couple of injury scares. Ben Finley, the projected backup to Leary for 2021 and younger brother of former Wolfpack quarterback Ryan Finley, got rolled up on by a defender early in the game. He missed a few series but was able to return and even run for a touchdown. Running back Justin Houston was not so lucky as he had to be taken away on a cart, but Doeren said afterwards the X-rays were negative and the initial evaluation suggested the injury was “probably just a sprain” in his foot.