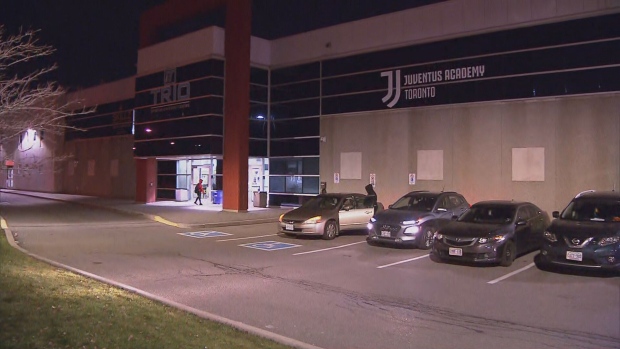 York Region says 11 confirmed cases of COVID-19 have been linked to an indoor sports facility in Vaughan, and eight businesses were charged and fined Saturday for violating public health protocols.

In a public notice, York Region Public Health said the cases were traced back to two soccer games played on Nov. 11 and Nov. 15 at TRIO Sportsplex and Event Centre, in the area of Teston Road and Highway 400.

A group of 20 to 25 people attended the two events, and while they wore masks during the game, health officials said they did not put them on in the changing rooms.

Of the 11 people who were diagnosed, eight are from Toronto. The other three are from the regions of York, Simcoe-Muskoka and Peel. All are being advised to self-isolate for 14 days.

“In the interest of transparency, we prefer to actually post any information on clusters that we think would be of interest to the public,” Dr. Karim Kurji, York Region’s medical officer of health, said in an interview with CP24 on Saturday.

Those who attended the games are being told to monitor their symptoms as the risk of exposure is high, health officials said.

“What this does is it highlights the importance of being so careful when we go to places like the gyms and also being very careful in changing rooms in particular when you’re playing indoor soccer.”

Kurji noted clusters like this show there is evidence that there is a potential for COVID-19 transmission in gyms and sports facilities.

On Saturday, 145 new COVID-19 cases were reported in York Region.

While cases in the area seem to be plateauing, Kurji said they are still teetering.

“We haven’t actually seen the reduction that I was hoping for,” he said.

“We should be seeing those reductions anytime now, given that we’ve been about 10 to 12 days after we went into the red zone. So, we need to remain vigilant.”

York Region is in the red-control level of the province’s COVID-19 tiered framework for restrictions.

Officials pleaded with the province not to place the region in the lockdown level with Toronto and Peel, saying they are confident that current restrictions are enough to control the spread.

Inspectors from the Ministry of Labour and members of the COVID-19 enforcement task force, which include York Region Public Health inspectors, bylaw officers and police, are conducting an enforcement blitz in the region this weekend to make sure businesses are complying with protocols.

On Friday, they inspected 439 establishments, issuing charges under the Reopening Ontario Act and Section 22 of the Health Protection and Promotion Act to six businesses.

The focus of Saturday’s inspections were big box and grocery stores. In a news release, York Region said inspectors visited 172 establishments and eight businesses were charged.

“We believe that we’ve taken all the precautions that we need to take,” the doctor said.

“And we are hopeful that we don’t actually move into the lockdown zone.”